Protestors of the Trump Administration's immigration policy participate in a rally at Lafayette Square then march to the Justice Department. Billed as the Families Belong Together Rally and March, the action in the District is one of a reported 700 events nationwide.
The Washington Post – The Washington Post/Getty Images
By Alana Abramson

More Americans disapprove of the way President Trump is handling immigration policy than of his presidency as a whole, a new poll finds.

Most Americans — 59 percent — don’t approve of the President’s handling of immigration, according to a Washington Post-Schar School poll released on July 6, while 39 percent approve. Of that 59 percent, 44 percent strongly disapprove, and 15 percent only somewhat disapprove. Of those who approved of Trump’s immigration policies, only 19 percent did so strongly.

The economy was the only area where Trump hit a 50 percent approval rating, according to the poll.

The Washington Post-Schar School poll was conducted from June 27 to July 2, one week after the White House found itself besieged by a publicity crisis over the separation of families at the U.S.-Mexico border, a direct result of its zero tolerance policy. There were 1,473 adults surveyed for the poll, including 865 who live in Congressional districts classified as battlegrounds in the upcoming November elections. The margin of error is five percentage points.

But, ultimately, Trump’s hard-line stance on immigration may not even matter as much as other issues in November. Immigration came in third when registered voters were asked what they deemed the most important issues this election cycle. Although it trailed the economy and jobs and health care, it did outrank taxes and international trade. 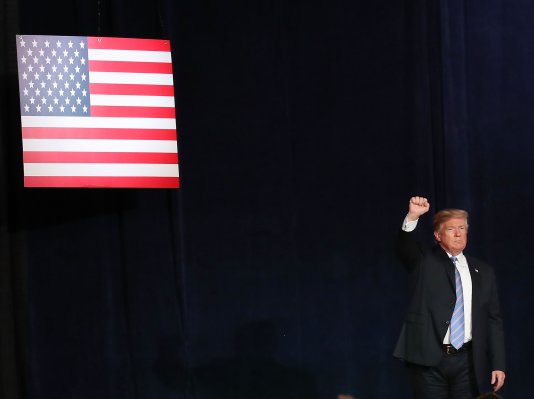 President Trump Again Calls for Stripping Migrants at the Border of Due Process
Next Up: Editor's Pick