Trump and Putin Will Call Their Summit a Success. But Don't Expect U.S.-Russia Relations to Improve

This week, the Senate Intelligence Committee officially backed the U.S. intelligence community’s assessment that Russia meddled in the 2016 U.S. election. But for all President Donald Trump cares, the committee could have announced that the Russians orchestrated the kidnapping of the Lindbergh baby.

After a quick stop at the NATO summit in Brussels next week to (probably) argue with U.S. allies, Trump will continue on to meet Russian President Vladimir Putin in Helsinki on July 16 for their first official summit. According to press reports, he is preparing for a one-on-one with his Russian counterpart before being joined later by White House aides.

Trump’s meeting with Putin will command headlines and think pieces for days, and understandably so; for all Trump’s political peculiarities, his personal relationship with Putin is the most peculiar of all. Yes, Trump has an affinity for the 21st century “strongman”, of which Putin remains the reigning exemplar. Yes, Trump feels that giving any credence to stories of Russian election interference only serves to undermine his legitimacy, not to mention his electoral triumph over Hillary Clinton. Yes, Trump wants always to do the opposite of Barack Obama, whose icy relationship with Putin and genuine bond with German Chancellor Angela Merkel has been flipped on its head by Trump (give or take a couple of Starburst candies).

But none of that fully explains Trump’s persistent desire to engage with Putin. One could argue that doing so in defiance of both Democrats and Republicans on Capitol Hill makes a certain amount of sense for the most anti-establishment president ever elected; doing so in defiance of one’s own staff and political advisors, not so much.

In spite of the accompanying noise, the summit itself should go well. Both Putin and Trump agree on a number of key geopolitical issues. They agree that the U.S. should be doing substantially less in Syria, and they both openly question the utility of the NATO security alliance. Both would like to see peace in the Middle East—as Jared Kushner pushes a plan to key stakeholders in the region, Putin extended invites to the World Cup final in Moscow to both Israeli President Bibi Netanyahu and Palestinian Authority leader Mahmoud Abbas.

Trump and Putin also appear to agree that Russia should be allowed back into the G7/G8, since Moscow’s 2014 landgrab of Crimea is ancient history at this point. The other members of the alliance would never sanction it, but that’s besides the point. The fact that the media will be up in arms about the whole thing will goad Trump further, and Putin will be more than happy to go along for the troll.

The post-summit glow won’t last long though. Trump, unlike Putin, has constraints on his power back home (see: media, fellow Republicans, Trump’s own bureaucracy), and the mounting Mueller investigation will only make it more difficult for Trump to defy American political gravity when it comes to all things Russia.

If it were not for the specifics surrounding Trump, a rapprochement between the U.S. and Russia would actually make plenty of geopolitical sense. China is a much bigger strategic problem for Russia than the U.S. is, and friendships have been built on much less. But unfortunately – and despite his best intentions — Trump may be the least likely President to be able to deliver one. 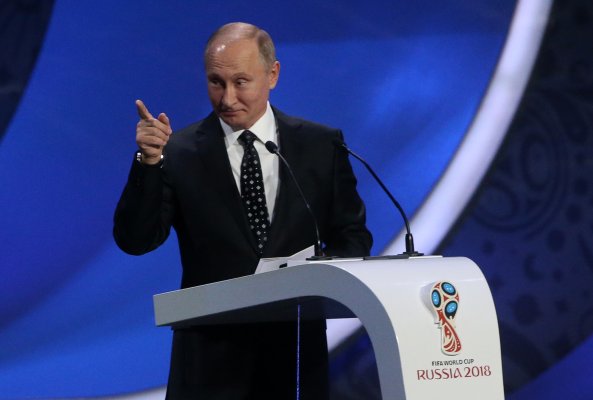 The World Cup’s Biggest Winners and Losers So Far—Both On and Off the Field
Next Up: Editor's Pick