At Least Two Dead as Severe Storms Deluge the Southeast

Firefighter Rusty Murphy wades through flood waters in a mobile home park in Pelham, Ala., on Monday, April 7, 2014.
Jay Reeves—AP
By David Stout

Severe thunderstorms flooded large swaths of the American southeast for the second straight day and have caused at least two deaths, including that of a nine-year-old girl in Mississippi who was reportedly swept away by floodwaters on Sunday night.

Officials recovered the body of Patrauna Hudson on Monday after she was last seen playing outside near her parent’s home in Mississippi’s Yazoo City northwest of Jackson the previous evening, according to the Associated Press.

The second reported death occurred outside of Atlanta in the suburb of Lilburn when a car swerved off the road and crashed into a local creek on Monday. Local firefighters were only able to recover the driver’s body hours later.

In nearby Augusta, Ga., a practice round ahead of this weekend’s U.S. Masters golf tournament was called off on Monday due to the excessive rain, the first time in an more than a decade such a cancelation had occurred.

Flood warnings remained in place across much of the southeast on Tuesday morning, with more rain forecast to inundate the affected areas for the next 48 hours. 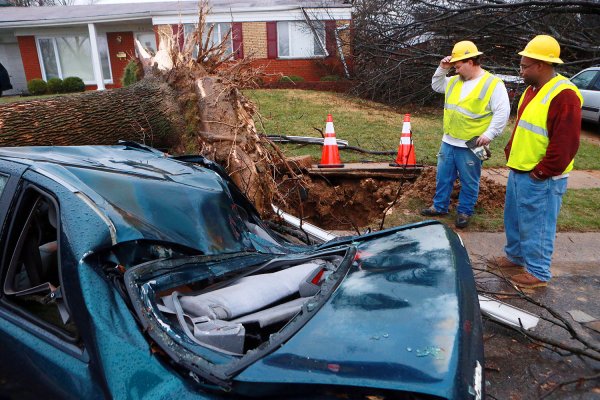 Tornadoes and Hail Batter Midwest
Next Up: Editor's Pick