A woman who climbed to the base of the Statue of Liberty on the Fourth of July, forcing thousands to evacuate the iconic monument and leading to a four hour stand-off, has been arrested, police said.

The woman has been identified as Therese Patricia Okoumou, according to the Associated Press.

Okoumou was reportedly one of 40 protesters from the activist group Rise and Resist New York that had earlier unfurled a banner at the base of the Statue of Liberty that said “Abolish ICE” — referring to the U.S. Immigration and Customs Enforcement. The group, of which half a dozen were arrested, was demonstrating against the Trump administration’s crackdown on illegal immigration.

According to fellow demonstrators, Okoumou’s stunt, which unfolded for several hours on television, was not part of their original plan.

“We don’t know whether she had this planned before she ever got to Liberty Island or whether it was a spur-of-the-moment decision,” Jay W. Walker, an organizer with Rise and Resist, told AP. Walker told the New York Times that Okoumou had been actively involved with Rise and Resist for several months. “We don’t condemn her for the choice she made, and we’re going to do anything we can to support her,” he said.

In a four-hour standoff with police, Okoumou sat on the base of the Statue of Liberty, which stands at about 30 meters, as authorities tried to coax her down. Eventually officers scaled the monument using a ladder and ropes. The woman then climbed down eight meters to the observation deck, where she was taken into custody.

In this image made from video by PIX11, a woman leans against the robes of the Statue of Liberty on Liberty Island, in New York, July 4, 2018.
PIX11/AP

Okoumou told police that she was protesting the separation of immigrant children from their parents at the U.S.-Mexico border. Some 2,300 children have been separated from their families over a six-week period in April and May.

“We just tried to get a dialogue with her while she was up there,” Detective Brian Glacken of the NYPD Emergency Service Unit said at an evening briefing Wednesday. “I think the turning point was when we got her, she couldn’t go any further, and I think she realized her time was up up there.”

“Abolish ICE” has become a growing rallying cry among protestors and Democratic lawmakers around the country amid a national debate over President Donald Trump’s immigration policies. Rep. Mark Pocan (D-WI) and Alexandria Ocasio-Cortez, a Democratic candidate for Congress in New York have championed the platform. Trump has said on Twitter that abolishing ICE will “never happen!”

Last February, a banner was hung from the observation deck of the Statue of Liberty reading “Refugees Welcome.” It was removed after an hour of being discovered, AP reports.

Okoumou is expected to appear in a Manhatten federal court on Thursday, the New York Times reports. 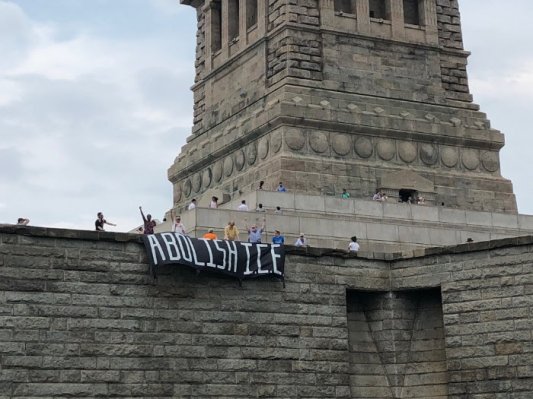 Woman Climbs Statue of Liberty During Anti-ICE Protest
Next Up: Editor's Pick