A Kentucky woman who shot and killed a giraffe in South Africa last year has faced an online backlash after photos of her posing with the animal’s corpse resurfaced and went viral.

Tess Thompson Talley, 37, initially uploaded the photos, from a hunting trip taken in June 2017, to Facebook with a caption that reportedly said: “Prayers for my once in a lifetime dream hunt came true today! Spotted this rare black giraffe bull and stalked him for quite awhile.”

Her post has now been deleted, but the photos are still being widely shared online.

The online news organization Africlandpost shared the photos on June 16, in a tweet that went viral. The tweet called Talley a “White American savage,” who shot “a very rare black giraffe courtesy of South Africa[n] stupidity.” The tweet had been shared over 44,000 times by Wednesday.

There are fewer than 100,000 giraffes left in Africa, down by as much as 40% since the 1980s, due in part to illegal hunting, climate change and expansion of farmland. There is no indication Talley’s hunt was illegal.

However in a statement to CBS News, Talley said killing the giraffe contributed to conservation efforts through “game management.” She said the giraffe was “beyond breeding age, yet had killed 3 younger bulls… Now that the giraffe is gone, the younger bulls are able to breed.”

She also told Fox News that the breed of giraffe was not very rare, as claimed in the viral tweet and in her own Facebook post. “The breed is not rare in any way other than it was very old,” she said. “Giraffes get darker with age.”

Talley posted further comments on her Facebook page on Wednesday. One read: “Dear people posting about animals, their rights, and animal murder: 1 – Animals have no rights as they are animals not humans. 2- Therefore you can’t murder animals.”

In another, she wrote: “Hey friends, just to make it clear on how hunting is conservation; the money I spend hunting in Africa goes towards local wildlife preservation. I’m basically donating it, what has everyone else done for the animals recently?”

The viral photos have spurred an online debate about the controversial practice of trophy hunting, in which hunters can arrange permits to shoot animals in return for payment.

On Twitter, actor Jeffrey Wright referred to Talley as a “self-obsessed lunatic colonizer.”

In a follow up to its viral tweet, Africlandpost said: “If our so called governments can’t care for our wildlife then it’s time we stand up and responsibility of our continent, lands, resources and wildlife.” It continued, “let’s have a united voice against pillage of Africa, it’s the only home we have.”

Other comments online drew comparisons to the 2015 shooting of Cecil the Lion by American dentist Walter J. Palmer in Zimbabwe. That shooting attracted international news attention and widespread condemnation. 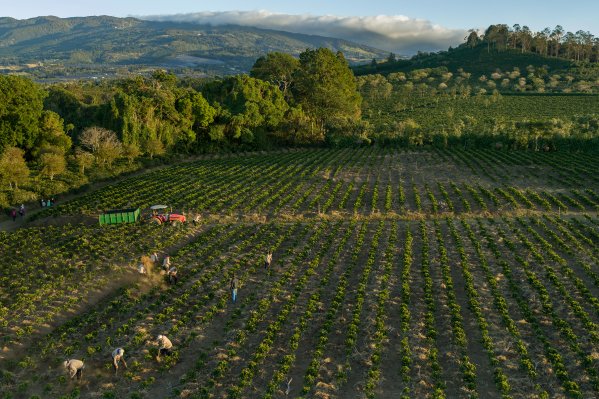 Your Morning Cup of Coffee Is in Danger. Can the Industry Adapt in Time?
Next Up: Editor's Pick