'Happy as I Could Be in the World.' What It Was Like in Thailand When Rescuers Found the Soccer Team Trapped in a Cave

They’re alive. All of them.

For nine days, Rawimon Mongkoltanakul has been handing out cup noodles and energy drinks to soldiers, monks, government officials and others who joined what – at times – seemed like a hopeless effort to rescue 12 boys and their coach trapped deep inside a cave in northern Thailand.

“I’m as happy as I could be in the world,” she tells TIME, still manning her station at 12:30 a.m. Tuesday, shortly after authorities announced that they had all been found alive. “I’ve been here since the start because I felt sympathy for them,” she says. “I felt like, ‘What if it was my kid?’”

By the end of it, well over 1,000 people were working around the clock to find the Wild Boars, a team of young Thai soccer players between the ages of 11 and 16, and their assistant coach, 25-year-old Ekkapol Chantawong. On the afternoon of June 23, after soccer practice, Ekkapol led his team on what was meant to be a short trek into Tham Luang cave, a system of tunnels winding up and down beneath a mountain near the border with Myanmar. The skies were clear in the early afternoon, but monsoon rains come quickly.

Family members and relatives pray at the entrance of Tham Luang cave while rescue personnel conduct operations to find the missing members of the children's football team along with their coach at the cave in Khun Nam Nang Non Forest Park in Chiang Rai province on June 26, 2018.
Krit Phromsakla Na Sakolnakorn—AFP/Getty Images
Relatives of the missing boys react after the 12 boys and their soccer coach have been found alive in the cave where they've been missing for over a week after monsoon rains blocked the main entrance on July 2, 2018 in Chiang Rai, Thailand.
Linh Pham—Getty Images

By the time their bicycles were discovered abandoned at the mouth of the cave, they were already trapped inside. What began as a small team of local responders looking for some lost boys snowballed by midweek into a multinational emergency response. Special forces and technical experts from more than half a dozen countries – including the United States – poured in to support Thai authorities in a desperate search that gripped the entire nation.

“Since the news broke that children were trapped in the cave, everybody’s been looking at their phones and their tablets,” says Thanom Koenpetch, a 50-year-old taxi driver, stunned. “We’ve been following the news, and I’m very glad, everybody’s very glad that they found them.”

British divers assisting Thai Navy SEALs made initial contact with the boys and their coach in a tunnel about 1,300 feet beyond a chamber called Pattaya Beach, where rescuers believed they had sought refuge. The Thai SEALs and later their support teams had been diving around the clock since 2 a.m. Monday in almost impossible conditions. When the rains came, they swept dirt and debris into the narrow tunnels connecting the caverns. Unable to see, divers felt their way forward through mud and stalactites, grasping around to find small entryways leading from one channel to another.

Thai soldiers carry hose deep into the Tham Luang cave to pump out water at the Khun Nam Nang Non Forest Park in Chiang Rai on June 27, 2018 during a rescue operation for a missing children's football team and their coach.
Lillian Suwanrumpha—AFP/Getty Images

Rising water levels forced them to suspend exploration several times. Submersible pumps sent water gushing out into neighboring farmlands as fresh rains filled the chambers up again. As time wore on and rain kept pouring, authorities began seeking alternative entries; helicopters and drones hovered overhead as soldiers and police plodded through jungle on the hillside above to find chimneys and fissures wide enough for a climber. On Sunday night, the chatter among local reporters was that someone had seen the governor of Chiang Rai province, Narongsak Osottanakorn, who has overseen the search operation, break down and weep.

The slightest of progress on Monday — divers advanced a few hundred yards — worked wonders on the spirit, but the news still came as a shock.

“They are all safe,” Narongsak announced around 10:40 p.m. to stunned journalists and volunteers on site. In Chiang Rai, the provincial capital, shopkeepers were glued to their smartphones for updates. “But our mission is not completed… so far we’ve just found them, now we have to bring them out and get them home.”

Wiwat Wutichoui, 53, was on the brink of tears.

“People speak a lot about life, that life has worth,” he said. “This just shows people do care about saving them — that’s humanity.” 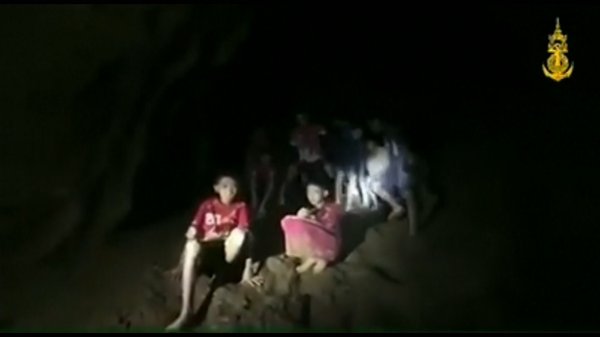