Republicans are increasingly worried that President Trump’s burgeoning global trade war could cripple the U.S. economy and hand control of Congress to Democrats.

A raft of traditional GOP allies are warning about the consequences. On Monday, the U.S. Chamber of Commerce released a report highlighting how international trade supports industries ranging from Texas pork to Oregon plywood. Last week, General Motors told the Department of Commerce that proposed tariffs would lead to reduced employment and lower wages at the company — a development that would have dire implications for suppliers already skittish about continuing to produce the parts used to build vehicles. And on June 26, leading industry trade groups from the American Petroleum Institute to the Alliance of Automobile Manufacturers signed a letter in support of a Congressional effort to impede Trump’s tariffs.

“We’re trying to improve trade, but the way it’s being done is backfiring on U.S. companies and will backfire on the U.S. economy,” said Carlos Gutierrez, U.S. Secretary of Commerce under George W. Bush and chair of the Albright Stonebridge Group.

The list of fronts in Trump’s trade war is long and affects a host of politically sensitive industries. He has placed tariffs on steel and aluminum from across the globe, including allies like Canada and the European Union. He has targeted a wide variety of Chinese goods valued at $50 billion and told his team to identify $200 billion more. He’s even floated a 25% tariff on all auto imports, many of which come from allies like Germany and Japan.

Congress has tried to raise the alarm about how all this could play out in November, when Republicans are defending majorities in the House and Senate. Trump’s protectionist inclinations run counter to what it has meant for years to be a Republican. But these aren’t just academic arguments. An economic downturn brought on by tariffs could help Democrats net the 23 seats they need to recapture the House majority. A trade war could destroy industries at the heart of local economies. Kentucky, for example, faces a $180 million hit in European tariffs on whiskey, $25 million from Canada, $10 million from Mexico and $2 million from China, according to the Chamber’s database of tariffs and targets.

The split over trade is hardly the first time that Trump has drawn criticism from Republicans for breaking party orthodoxy. Just last month, for example, the Chamber demanded that Trump end his Administration’s zero-tolerance policy at the border that split parents from their children. The powerful collection of advocacy groups affiliated with billionaires Charles and David Koch have been outspoken critics of Trump’s views and policies on immigration, trade and tariffs. “Keep in mind, 55% of all votes cast in the Republican primaries went for someone not named Trump,” one Republican strategist who worked against the Trump campaign tells TIME. “We tried to stop this.”

Intellectually, Republicans in the House and Senate get what these outside groups are saying. Many lawmakers privately agree with these boosters. But attempts by Congress to rein in the President’s trade policies are largely non-starters. Retiring Sen. Bob Corker of Tennessee fought to include a check on Trump, only to be sidelined by fellow Republicans who rightly note that while the President’s approval rating isn’t stellar, it’s still better than that of Congress.

Moreover, those disagreements have been outweighed by delight that the President has delivered on areas like tax cuts, boosts to military spending and judges. The looming Supreme Court nomination highlights why he has energized social conservatives and others who would like to see the Court scrap protections for unions, the environment and minority voters. Just last week, the Koch-led network pledged more than $1 million to help sell Trump’s nominee to the Supreme Court. (Disclosure: Time Inc., TIME’s parent company, was acquired by Meredith Corp. in a deal partially financed by Koch Equity Development, a subsidiary of Koch Industries Inc.)

Trade is an area that affects the pocketbooks of the GOP base as well as its bigwigs. A dip in investor confidence could lead trillions in invested wealth to disappear. And while the ultra-rich would seem the obvious losers, much of this could be felt in teacher retirement funds, municipal bonds and college endowments. Trump may not base policy decisions in how that affects Republicans in 2018. But his re-election in 2020 could hinge on the economy’s health.

Write to Justin Worland at justin.worland@time.com and Philip Elliott at philip.elliott@time.com. 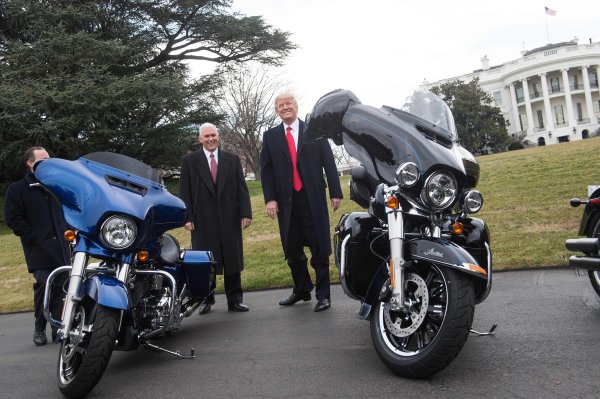 7 Ways Donald Trump Made Harley-Davidson a Target
Next Up: Editor's Pick