Prince Louis' Christening Venue Has a Poignant Tie to Princess Diana. Here's What to Know About the Chapel Royal

Prince Louis of Cambridge hasn’t been seen since he was born, but expect more adorable photos of the newest royal baby soon after his christening.

Prince Louis — the third child of the Duke and Duchess of Cambridge and the fifth in line to the British throne — will be christened on Monday at St. James’s Palace’s Chapel Royal, which has been home to many important moments of British royal history, including royal weddings and other religious ceremonies.

Prince Louis’s christening will also be the his first appearance with the complete royal family, including his siblings Prince George and Princess Charlotte.

In preparation for Prince Louis’s christening, here are 5 things to know about the historic Chapel Royal:

Prince George was also christened there

The St James's Palace before the christening of Prince George in the Chapel Royal.
John Stillwell —WPA Pool — Getty Images

Prince Louis isn’t the only royal baby from his immediate family to be christened at the Chapel Royal.

While Louis’s older sister Princess Charlotte was baptized at the Church of St. Mary Magdalene in Sandringham, Prince George’s christening was at the Chapel Royal in 2013. Prince George’s ceremony was officiated by the same reverend, Archbishop of Canterbury Justin Welby, who will officiate Louis’s.

Prior to her engagement to Prince William, the Duchess of Cambridge hadn’t been confirmed by the Church of England. Middleton was confirmed in a private and secretive ceremony at the Chapel Royal on March 10, 2011. Because Prince William is expected to become king — making him the future Supreme Governor of the Church of England — many considered this religious service necessary for Middleton.

King George V was married there

Prince George, the Duke of York, and Princess Mary of Teck, were married in the Chapel on July 6, 1893. According to an 1893 issue of the Dubuque Daily Herald, the Chapel Royal was “beautifully adorned with palms, flowers, and carpeted with crimson” for the royal wedding of George and Mary.

Queen Victoria and Prince Albert were married there

King George V wasn’t the first royal to be married in the Chapel — Queen Victoria and Prince Albert were married there in 1840. The Sydney Morning Herald reports Victoria’s diary revealed a woman madly in love with her husband, which was somewhat taboo for a 19th-century woman.

It seems that Queen Victoria fell in love with Prince Albert immediately after meeting him at age 20, according to the Morning Herald. She even referred to him as “beautiful” in one of her diary entries, according to the BBC.

In 1840, Queen Victoria wrote, “Already the 2nd day since our marriage; his love and gentleness is beyond everything, and to kiss that dear soft cheek, to press my lips to his, is heavenly bliss,” according to the Morning Herald.

It has a sad connection to Princess Diana

After Princess Diana’s tragic death on August 31, 1997, her body was taken from a private mortuary and then kept at the Chapel Royal before her funeral. 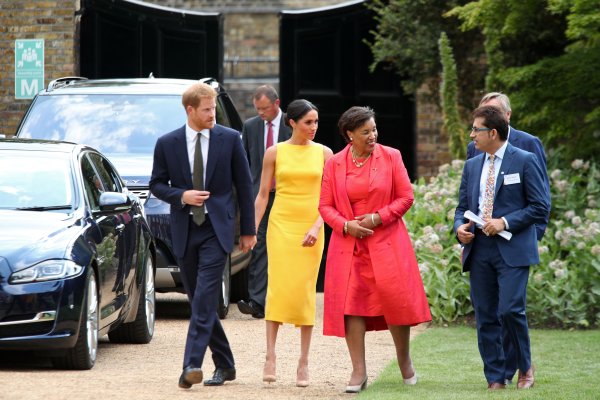 Meghan and Prince Harry Held Hands Like a Regular Couple
Next Up: Editor's Pick