A “psychic” octopus that correctly predicted the results of all three of Japan’s soccer World Cup group stage games has been killed and sent to market, just as the knockout stages of the tournament get underway, according to Japanese media.

Rabiot, a giant Pacific octopus caught in Obira, Hokkaido, correctly “predicted” that Japan would win against Colombia, draw with Senegal and a loss to Poland – and it became a national sensation in the process.

Its method involved being placed into a pool with three baskets of food representing Japan winning, Japan’s opponent winning and a draw. Whichever it swam toward first became its prediction.

Local media reported that Kimio Abe, the fisherman who had caught Rabiot, had decided that his business was more important than keeping the “psychic” octopus alive for the knockout stages.

“I hope that the second Rabiot will also give all the outcomes correctly and that Japan will go all the way,” he said, according to Sora News 24.

Japan will face title-contenders Belgium on Monday – and although this World Cup has been one of surprises, perhaps getting slaughtered was Rabiot’s way of predicting the outcome of the match.

It’s not the first time an unlikely animal has made headlines by predicting the outcome of World Cup games.

In 2010, Paul the octopus became an international star after correctly predicting the results of all Germany’s games in the 2010 World Cup, as well as the final – in which it backed Spain to win. Similar to Rabiot, its method involved eating food daubed with the colors of opposing teams.

This year, a Russian cat named Achilles is being touted as the latest psychic animal, after correctly predicting that the hosts would beat Saudi Arabia and Egypt – though he incorrectly backed Nigeria in their spat with Argentina, which beat them 2-1.

And unfortunately for Harry, an “oracle otter” in Sochi, Spain crashed out of the tournament on Sunday, contradicting Harry’s prediction that Spain would beat Russia to proceed to the semi-finals. 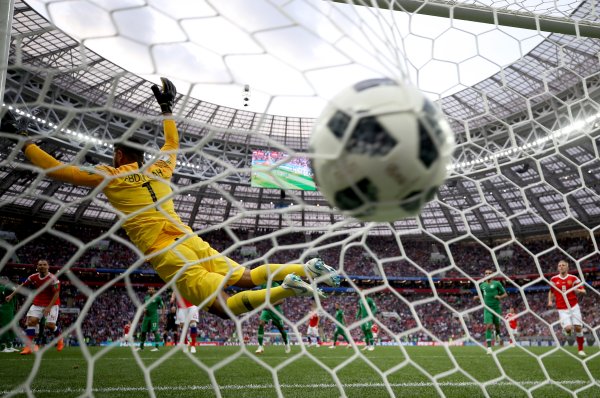 32 Teams Entered, 16 Remain. Your Ultimate Guide to the World Cup Knockout Stage
Next Up: Editor's Pick