The Wild Boars must have passed several signs warning them not to wander further into Tham Luang. But skies had been clear just a few hours earlier on June 23, when the team of young soccer players trekked into the complex with an assistant coach and disappeared with a day’s worth of food and some flashlights. By the time park authorities noticed the bicycles left by the mouth of the cave after hours, the entrance was already sealed.

Authorities in Thailand’s northern Chiang Rai province say they’re hopeful that the 12 boys, aged between 11 and 16, and their 25-year-old chaperone can still be found alive. Their anxious parents awoke Saturday on plastic chairs for the seventh day in a row. Divers geared up in a nearby tent and waded back into a muddy black chasm. On the hillside above, police trod through tropical brush on a determined search for undiscovered chimneys, as steep entryways into caves are called.

What began as a small team of local responders looking for some lost boys grew by mid-week into a multinational race against time, with hundreds of soldiers, civilians and foreign experts trying to penetrate the cave’s large inner chamber from every angle they could find. Rescuers believe that once inside, the group walked 1.8 miles to an intersection deep inside the complex, where tiny handprints and two abandoned backpacks were found in the mud. They likely turned left into a narrow corridor that winds sharply up and down before opening up through a tiny passage into a main chamber known as Pattaya.

But the afternoon brought so much rain that the corridor filled to the top. The following days brought no relief as rains kept pouring.

“We had bad luck,” says Chiang Rai’s Governor Narongsak Osottanakorn, speaking to TIME at a muddy encampment where Thai soldiers have set up their makeshift headquarters. Twenty submersible pumps were switched on to dredge the route, but fresh monsoon rains deluged it just as quickly. “We’ve never had a problem like this before,” Narongsak says, “there’s too much mud, there’s too much water.”

“We will stay until we find them,” says Captain Wuttichai, who oversees the team of Thai Navy SEALS that have been trying to reach them since Sunday. “They’re healthy, they’re young,” he tells TIME, confident of the group’s survival, “and besides, they are athletes.”

Divers take turns pushing blindly through the flooded passage until they reach a dead end, where they feel around in the darkness for the 0.5 meter-wide opening that might lead them into a chamber where they hope to find the missing huddled on a dry shelf. They pat the walls until they almost run out of oxygen, then they turn around, rest, and try it again. “The conditions are very bad,” says Ben Reymenants, a Belgian diver supporting the Thai SEALS, “once you’re in there you can’t see anything at all.” But if the coach is clever, he says, it’s possible they could survive for two weeks without contact. The divers keep diving.

Read more: Thai Divers Continue the Search For 12 Boys and Their Coach Trapped in a Flooded Cave

Soldiers and police meanwhile scour the northern side of the mountaintop for crevices wide enough to let them drop down from above. Only one of the four they found has room enough for a climber. Running out of time and options, authorities decided Thursday to bore a hole into the hillside with an industrial drill supplied by the country’s energy utility. But the equipment is so heavy, and the roof so thin, Narongsak says it risks collapsing on top of them without geological scans that could take days. On Friday, authorities sent some 20 boxes of emergency provisions down the chutes and floating through the channels, hoping one would reach them. Inside each box was a map and a pencil, with handwritten instructions to mark their location and float it back in the direction of the outside world.

Not much is known about the missing boys and Ekkapol Chantawong, the coach who disappeared with them. Relatives wait for good news beneath a banner advising the hundreds of journalists staking out the site not to talk to them. Social workers say most of them haven’t left the site since the search began. At first they were inconsolable, but they’re beginning to find some calm. The country’s Prime Minister, Prayuth Chan Ocha, visited Friday morning, urging them to “take a deep breath, stay calm, and have faith.” They pray and sit vigil through much of each day; Buddhist and animist shrines around the site overflow with offerings. At one, a man kneels in front of mounds of flowers, hands of bananas, soda bottles and a fresh pineapple. At another, someone left a lone white rabbit, chewing on a leaf of cabbage inside a cage.

“I believe the children are still alive,” says Saikhoe Sai Song, a spiritual leader of the Hmong hill tribe that is peppered across the Thai highlands. Clad in a clean, white traditional costume, he seems indifferent to the hundreds of uniformed men and women sloshing through mud to carry out commands—indifferent even to the mud itself. Almost 70 years old, he comes here daily and does what he can to try to save the boys. He says he is one of just a handful of people who knows the ritual that can convince the mountain spirit to let them go.

Roughly a thousand people are involved in the monumental effort to reach the missing team, bearing witness either to a miracle or a terrible tragedy. For Narongsak, the governor, all efforts are welcome.

“We’re starting to see progress,” he says. “We are working around the clock, and we still have hope.” 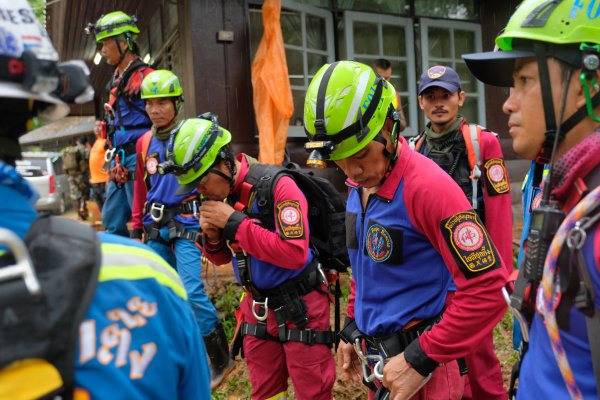 Race Underway to Save Thai Teens
Next Up: Editor's Pick