European Leaders Say They Made a 'Breakthrough' Deal on the Migrant Crisis. Here's What They Agreed To Do

Their deal comes after months of increasing tension over the European Union’s migration policy. Southern European states have long felt disproportionately affected by the influx of migrants arriving on their shores, while many central and eastern states vehemently oppose any relocation policy that would lift that burden by sharing migrants among member states.

Securing a deal was imperative for German Chancellor Angela Merkel, who is under pressure from domestic coalition partners who, earlier in June, effectively threatened to end her premiership if she could not find a way to reduce the number of migrants coming into Germany. Merkel said the deal was a “good signal,” but conceded that “we still have a lot of work to do.”

“People thought it was totally impossible to deliver an agreement yesterday,” said French President Emmanuel Macron on Friday morning. “We found an agreement. And we decided altogether to work for European cooperation and to have a cooperative approach.”

Still, precise details about the agreement were in shorter supply than leaders’ expressions of success on Friday. But here’s what we do know about what the deal contains — and what it does not.

At the crux of Merkel’s problems at home is the issue of migrants coming to Germany after already registering in other European countries in what’s known as “secondary” migration. The final text of the agreement says E.U. member states should take “all necessary … measures” to stop such movements.

Those rules would put an end to migrants’ ability to pick and choose any E.U. country in which to settle after gaining refugee or asylum-seeker status, which they typically receive in a Mediterranean country. For over a million migrants already in Europe, their ultimate destination was Germany — a country whose citizens are increasingly turning to anti-migrant parties like Alternative For Germany, putting pressure on Merkel.

But the deal has no information about what measures states might take to end secondary migration. Merkel will now have to strike bilateral deals with other E.U. countries to decide how to implement the measures — agreements that will potentially be far trickier than the one made Friday morning.

For Merkel, that means whether she can overcome her domestic problems still depends on agreements yet to be made. Despite this, E.U. budget honcho and Merkel ally Günther Oettinger declared Friday’s deal a “genuine breakthrough.”

The agreement contains a commitment to build centers across the E.U. which would provide “rapid and secure processing” to distinguish migrants with valid claims of asylum from those coming to Europe illegally.

But hard negotiations from countries like Hungary and the Czech Republic ensured that such centers would be “voluntary” — in other words, states would both have to agree to host the centers and agree to take any migrants deemed suitable to remain in the E.U.

That’s another blow for the beleaguered refugee quota system, favored by Germany but reviled by mostly central and eastern European states like Austria, Hungary, the Czech Republic and Poland.

But the agreement lacks any indication of where such centers would be located, or how “voluntary” decisions to take successful migrants would be made. Nor does it say where failed claimants would be sent. But France’s Macron said Friday that the centers would be set up in countries where migrants typically first enter the E.U., like Italy and Greece.

“We are satisfied,” said Italian Prime Minister Giuseppe Conte, who at one point in the night threatened to veto any agreement unless more support was given to Italy. “It was a long negotiation but from today Italy is no longer alone.”

Exploring the idea of setting up centers outside the E.U.

The agreement also floated the idea of establishing “regional disembarkation platforms” in countries outside the E.U. — most likely in northern Africa — in order to combat the criminal people-smuggling that leads to so much death in the Mediterranean. Such centers would process E.U. asylum claims outside of E.U. territory, thus eliminating the “incentive to embark on perilous journeys,” according to the deal.

However a senior official admitted earlier in June that no north African country had yet agreed to host such centers. 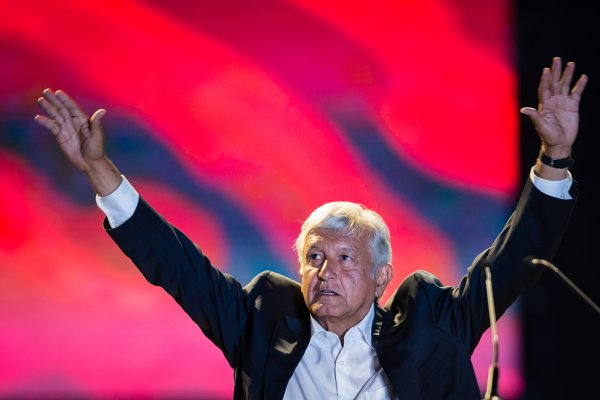 Your Complete Guide to Mexico's 2018 Elections
Next Up: Editor's Pick