These Are the Victims of the Capital Gazette Shooting

Five people were killed and at least three injured when a gunman opened fire in the offices of the Capital Gazette newspaper in Annapolis, Maryland Thursday.

All of the victims of the shooting were employees at the paper, police confirmed late Thursday. Among those killed was long-serving Capital Gazette and Baltimore Sun journalist Rob Hiaasen, his family confirmed. The other victims were identified as features reporter Wendi Winters, writer John McNamara, editorial page editor Gerald Fischman, and sales assistant Rebecca Smith, according to the Associated Press.

Police called the assault was a “targeted attack” on the newspaper’s offices. “He looked for his victims as he walked through the lower level,” acting Anne Arundel County Police Chief William Krampf told a news conference Thursday.

Krampf confirmed that two of those wounded suffered superficial wounds. Authorities had previously said that several people were gravely wounded, according to AP.

The suspect, who has been identified as Jarrod W. Ramos by AP, was apprehended by police and taken into custody Thursday. Police have not officially released his identity. Ramos was charged with five counts of first-degree murder, according to AP.

Here’s what to know about the victims of the Capital Gaette shooting:

This image obtained from the Capital Gazette shows Capital Gazette Assistant Editor and Columnist Rob Hiaasen, one of the victims of the June 28, 2018, shooting at the newspaper in Annapolis, Maryland.
Handout/Capital Gazette/AFP/Getty Images

“I am devastated and heartsick to confirm the loss of my wonderful brother Rob,” Hiaasen’s brother Carl wrote in a Facebook post. “He spent his whole gifted career as a journalist, and he believed profoundly in the craft and mission of serving the public’s right to know the news. We called him Big Rob because he was so tall, but it was his remarkable heart and humor that made him larger than all of us.”

Hiaasen, a veteran at the paper, hailed from Fort Lauderdale, Fl. and lived in the nearby Maryland suburb Timonium, according to the Baltimore Sun. He joined the Sun as a features writer in 1993, before moving over to the Capital, which the Sun owns, as assistant editor in 2010. He also authored a Sunday column in the “Life” section of the paper. He was known as a “great mentor” to young journalists who was “deadly serious about doing investigative reporting” but also had a “soft side,” his former colleagues told the Sun.

Hiaasen was also an adjunct professor at the Philip Merrill College of Journalism at the University of Maryland, and a 2004 Knight Journalism Fellow at Stanford University.

Hiaasen, 59, is survived by his wife, Maria, with whom he had recently marked their 33rd wedding anniversary, three children, and brother Carl, who is a novelist and Miami Herald columnist.

“There was no finer human being, there just wasn’t,” Hiaasen’s widow, Maria, said Thursday, her 58th birthday, according to the Miami Herald, “And certainly no finer father, and he was a damn fine journalist too.”

This image obtained from the Capital Gazette shows Capital Gazette Special Publications Editor Wendi Winters, one of the victims of the June 28, 2018, shooting at the newspaper in Annapolis, Maryland.
Handout/Capital Gazette/AFP/Getty Images

Wendi Winters, 65, came to the Capital Gazette following a career in fashion and public relations, according to the Baltimore Sun. The mother of four quickly became known as an energetic freelance reporter and knowledgable source about local events in the community.

“My mother was a wonderful woman and a fantastic reporter,” said her daughter, Winter Geimer. “Her life was a gift to everyone who knew her and the world will not be the same without her. We are grieving and trying to make sure all of us can be together to celebrate the life of our mother.”

Winters, who joined the paper’s staff in 2013, enjoyed a full life outside the newsroom, as a “proud Navy mom,” a church youth group counselor, Red Cross volunteer and a Girl Scout leader, according to the Sun. She was also known for her exhaustive Christmas letters, according to friends, which were often delivered along with a home-baked treat.

This image obtained from the Capital Gazette shows Capital Gazette Editorial Page Editor Gerald Fischman, one of the victims of the June 28, 2018, shooting at the newspaper in Annapolis, Maryland.
Handout/Capital Gazette/AFP/Getty Images

Gerald Fischman was “the conscience and voice” of the Capital Gazette, colleagues said Thursday, paying tribute to the eccentric and “brilliant” editorial page editor.

Fischman, 61, had been at the paper since 1992, where he was known for an incisive intellect and trademark cardigans, according to the Baltimore Sun.

“He was extraordinarily knowledgeable about the political dynamics of the community,” Maryland House Speaker Michael E. Busch told the Sun, calling Fischman “a bit of a loner, but very, very intelligent. He was a respected writer and captured, for the most part, the feelings within the community.”

Fischman married later in life, to a Mongolian opera singer, his colleagues said. Fischman graduated in 1979 from the University of Maryland’s journalism school.

John McNamara, known as “Mac” to his colleagues, was a sociable sports reporter with a nearly 24-year tenure at the Capital Gazette, according to the Baltimore Sun.

He was known for his wit, “infectious laugh,” and encyclopedic knowledge of local sports. McNamara was also a news editor and reporter for the local Bowie Blade-News and Crofton-West County Gazette. Former Capital editor Gerry Jackson, who hired McNamara from a local competitor recalled the writer’s “versatility”.

“He could write. He could edit. He could design pages. He was just a jack of all trades and a fantastic person,” Jackson said.

McNamara graduated from the University of Maryland, where he met his future wife, Andrea Chamblee. The couple did not have any children.

McNamara wrote two books, about the school’s football and basketball programs, and was a music fan and film buff. In a recent Facebook post, where he frequently shared articles about news, journalism, and University of Maryland sports, McNamara urged his friends to watch two documentaries, Won’t You Be My Neighbor about Fred Rogers and RGB, about Supreme Court Justice Ruth Bader Ginsburg.

“Both are marvelous and moving. And, in these troubled times, when the forces of darkness seem to have gained the upper hand, it’s nice to be reminded that there is still justice and kindness in the world,” McNamara wrote.

Rebecca Smith, one of the victims of the shooting at the offices of the Capital Gazette newspaper office in Annapolis, Maryland, U.S., June 28, 2018 is seen in this undated photo obtained by Reuters.
Handout/Reuters

Rebecca Smith, 34, was a sales assistant and recent addition to the Capital Gazette‘s team in Annapolis when she was killed in Thursday’s shooting.

Smith was “a very thoughtful person” who kept the sales office operations on track, said the Capital‘s advertising director Marty Padden. “She was kind and considerate, and willing to help when needed. She seemed to really enjoy to be working in the media business.”

Smith, a Baltimore native, joined the paper in Nov. 2017, according to her Facebook page. She had previously worked in marketing at a healthcare organization, according to the Sun.

Smith posted numerous photos on her Facebook page, the Sun said, many of them including her fiancé and his daughter at softball games and group outings. She enjoyed “an amazing relationship” with her fiancé’s daughter from a previous relationship, according to a friend.

“This cant be real,” Smith’s fiancé, DJ Poling, wrote on his Facebook page. “No one ever put up with or attempted to make me a better person like you did. I will love you forever.” 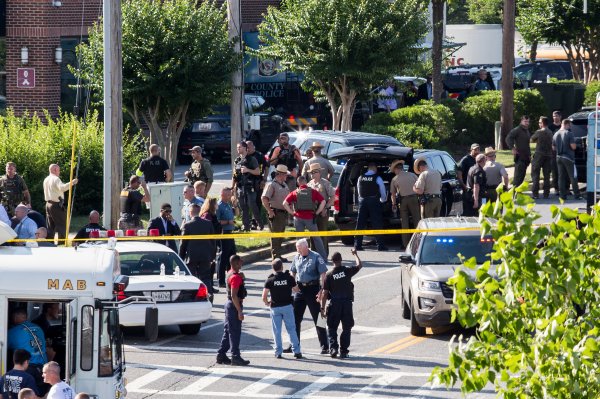 'We Are Putting Out a Damn Paper.' Journalists Defiant After Shooting
Next Up: Editor's Pick