How President Trump Turned Handshakes Into a High-Stakes Showdown

Early on, President Donald Trump made it clear that he views handshakes as a struggle for dominance. He’s now paying the price for that.

As Trump has charted a more combative course in his “America First” rhetoric and policies, many foreign leaders have responded by using the otherwise routine handshakes with the U.S. president to showcase their own power.

Video footage of a recent handshake with Portuguese President Marcelo Rebelo de Sousa spread rapidly around the internet after he pulled Trump forward, appearing to briefly throw him off balance.

Some leaders have even spoken openly about their experience with a Trump handshake.

“I was not trained, but I had prepared myself mentally,” Belgian Prime Minister Charles Michel once said after his first handshake with the President in 2017. “I had seen on TV that [German Chancellor] Angela Merkel and [Japanese Prime Minister] Shinzo Abe had a few difficulties.”

Some of Trump’s other recent handshakes have also been notable.

French President Emmanuel Macron, who has an on-again, off-again relationship with Trump, had such a forceful handshake with him during a G7 meeting in May of 2017 that it left his knuckles white. Macron later called the experience a “moment of truth.”

During a visit celebrating Paris’s Bastille Day in July of 2017, the pair locked hands again — this time for almost 30 seconds in an embrace that morphed into a three-person ordeal as Trump reached out to grasp the hands of France’s first lady while still holding onto Macron.

Trump has appeared to grow more comfortable with his French counterpart as time has progressed. The President even went in to give him an air kiss while vigorously shaking hands at chest level during Macron’s visit to the White House this past April.

But Macron isn’t the only leader who has faced the uncertainty a handshake from Trump entails. At a kickoff ceremony for an international conference in the Philippines in November of 2017, Trump made the news again when he incorrectly initiated his portion of a complicated arm-crossing ritual. He momentarily grabbed the hand of the neighbor to his right with his right arm, instead of his left, before correcting himself with a visible grimace.

Russian President Vladimir Putin has also fallen victim to Trump’s atypical handshakes. Though their encounter during the G20 Summit in July of last year started off as a normal greeting, Trump reached up to repeatedly tap the bottom of Putin’s forearm before it was finished.

All eyes were on the President when he and North Korean leader Kim Jong Un shook hands at the historic summit between the two adversaries in June. But to the surprise of many, the greeting — albeit lengthy — lacked Trump’s usual flair. 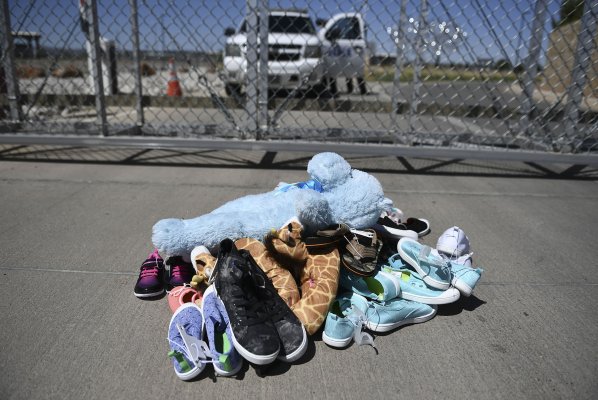 How President Trump Is Spurring Mayors to Speak Up on National Issues
Next Up: Editor's Pick