The Boss: I Launched a Hugely Successful Digital Media Company With No Business Plan

When I speak to other business owners, one glaring difference that stands out between our companies is how we got started. I’ve heard tons of stories of people crafting business ideas with colleagues and launching their companies with funding or fully-developed business plans. None of these experiences are similar to my own. I started Coveteur, a luxury digital media company, with Jake Rosenberg and Erin Kleinberg as a passion project in our apartment kitchens in Toronto. There was no business plan, no seed money and no savings. The only thing we had was an idea that we really believed in and the desire to start our own company in what was then a new digital age. But when the site launched with six closet profiles — featuring notable individuals in the fashion world such as Mona Sharf, Eugene Tong, and Joanna Hillman — on January 21, 2011, it crashed due to the traffic. Instantly, our side hustle was transformed into a full-time job overnight. Along the way, we’ve had a crash course in business, media, fund raising and management. There have definitely been many bumps and bruises in our journey, but there’s no course or class that can better prepare you for owning a business than actually just going out and doing it. I wouldn’t trade the lessons I’ve learned, or the hardships I’ve endured, for anything.

The idea for Coveteur came about one afternoon at a diner in Toronto. I had just moved back there from a stint in New York, and was looking for a creative project to fill my extra time as the job I had was unfulfilling. The topic of starting a digital business came up and seemed like a great idea, as there were no huge overhead costs to consider. At the time, street style looks were huge on fashion sites, so we decided to take that trend one step further and focus on where those enviable street style looks came from: people’s closets.

The first few months after the site went live, we scrambled to shoot as many closets as we could across America. This meant three people sharing a hotel room in New York and renting Airbnbs for weeks at a time in Los Angeles. Digital was a new frontier and we were learning everything on the go. To be honest, I think it was our authenticity and passion that made Coveteur something people wanted to read and be a part of from the beginning. I truly believe that if we had set out with a firm business plan for the site, it might not have taken off the way it did.

Around six months in, we decided to hire our first intern, but the majority of the work was still being executed by the three of us. The site also took us places we had never even imagined visiting. We were flown to Paris by Chanel to attend their couture show; we spent a day at the Playboy Mansion shooting Hugh Hefner; and we collaborated with iconic publications such as Elle and Vogue.

About a year after we launched, we were approached by investors. After finalizing a group of investors that included Drake and the Toronto-based Brand Project, we took on a seed round of $450,000 and started to expand the business. We were able to hire our first few employees on the editorial side, and grow our advertising efforts, which was the main source of our revenue at the time. We wouldn’t be where we are today — a company of 25 employees that is now based in New York City — without that infusion of cash, but I strongly suggest that any new business considering outside funding do their homework. Reach out to other people in your field who have taken on outside funding and listen to their advice. It’s easy to get swept up in the allure of raising money, but there are real and important issues to be aware of such as your valuation and board of directors. Hearing other people’s experiences with this can help inform yours. Most importantly, stick to your guns for your vision of the company and find people who believe in that, and of course, in you.

Three years ago, we made the decision to relocate our headquarters from Toronto to New York. It was time to expand the business again, and being in the same city as all of our advertising clients and other media brands was essential to this. Moving to New York also meant that we were able to hire from New York’s amazing pool of creative talent. Warren Webster, a veteran of AOL and GOOP, quickly joined our team as the CEO. From there, we went on to scale the company even more by assembling sales and editorial teams, run by industry experts.

In Toronto, the there three of us handled almost all of the tasks from editorial to photography and hiring. In New York, we were able to hire experienced professionals to help us grow and innovate. Having a company with 25 people is exciting, but also overwhelming at times. It may not seem like a big number to some, but learning how to manage everyone’s expectations and create an environment that people are proud to work in takes an insane amount of hard work, coaching and dedication.

Currently, we’re in the process of making our next big change. As the media landscape shifts from print to digital and social, we’re focusing not only on our site, but on building Coveteur into a full-scale brand. This means engaging more with our audience on social and offline, producing more video content and developing Coveteur-branded products, such as candles and home goods which just launched last week.

If you had asked me in high school if I ever thought I would own my own business, the answer would have been no. I truly believe the main reason I am here today with Coveteur is because I just got to work and started doing it. If I had been concerned with going to business school or learning how to set up accounting, I would have stopped myself from moving forward and achieving my goals. 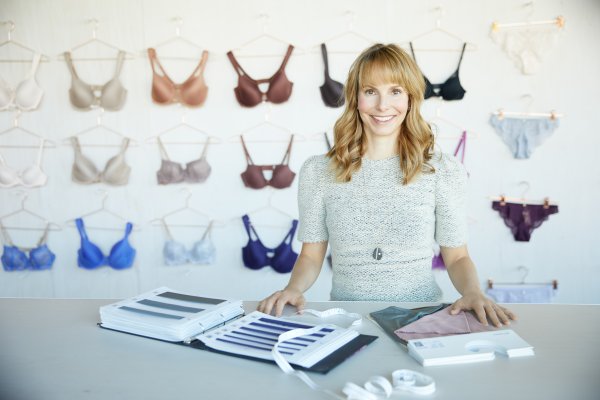 The Boss: Why I Decided to Create a Lingerie Company With 70 Bra Sizes
Next Up: Editor's Pick