Here's What Could Happen to Roe v. Wade and Abortion Rights After Justice Kennedy's Retirement

Abortion rights supporters and anti-abortion activists protest outside the U.S. Supreme Court during the 44th annual March for Life on January 27, 2017 in Washington, D.C.
Zach Gibson—AFP/Getty Images
By Katie Reilly

Kennedy, who was a pivotal swing vote in some of the most controversial rulings of the past 30 years, consistently upheld abortion rights during his tenure. But President Donald Trump campaigned on a promise to select Supreme Court nominees who would “automatically” overturn Roe v. Wade, the landmark 1973 ruling that established the constitutional right to an abortion.

“There’s every reason to believe that Roe v. Wade is on the chopping block,” said University of Chicago law professor Justin Driver, who clerked for Supreme Court Justices Stephen Breyer and Sandra Day O’Connor. “Roe v. Wade has been administered last rites many times, but fears — for supporters of Roe v. Wade — that its days are coming to a close are more justified than ever.”

‘Some states will try to outlaw abortion’

“It’s hard to believe that we’re not on a collision course here because I think it’s unlikely that reproductive rights groups are going to just sit idly by as this is challenged,” Driver said.

Jeffrey Toobin, a CNN legal analyst who has written extensively about the Supreme Court, made a similar argument in a tweet on Wednesday: “Anthony Kennedy is retiring. Abortion will be illegal in twenty states in 18 months.”

“Some states will try to outlaw abortion outright. Others will be more measured,” Driver said, referring to previous state laws that have sought to limit the number of abortion providers or require spousal notification. “The effect of this range of approaches will allow the Supreme Court to select whichever route it wants to go. One plausible scenario is that the court will not eliminate Roe v. Wade in one fell swoop, but instead will erode it over time until there’s little left.”

Columbia law professor Gillian Metzger, the faculty director of the Center for Constitutional Governance and a former clerk for Supreme Court Justice Ruth Bader Ginsburg, said Kennedy’s departure will lead to an “incremental pullback” from Roe v. Wade and Planned Parenthood v. Casey — a 1992 decision that reaffirmed the constitutional right to have an abortion.

“In practice it will become even more difficult, and in some states practically impossible, for women to exercise the right recognized in Roe and Casey of making the ultimate choice of whether or not to bear a child,” Metzger said in an email.

She said that could begin with the Supreme Court sustaining decisions by lower courts that are at odds with the Supreme Court’s 2016 ruling on Whole Women’s Health v. Hellerstedt — which struck down a Texas law that would have significantly limited the number of abortion clinics in the state. The ruling was decided with a 5-to-3 vote, and Kennedy ruled with the majority.

“States are continuously passing new laws, for example limiting access to medication abortion and dramatically limiting the window of time in which women can obtain abortions,” Metzger said. “If sustained, as might well happen, these restrictions will as a practical matter close off abortion access in many areas of the country.”

The effects will ‘reverberate across the entire society’

That impact is still concerning to abortion rights advocates, who argue that even limiting the scope of Roe v. Wade would dramatically change American life.

“If women can’t control their reproductive bodies — and it’s a crime to do so — we’ll also see a drop in women in the wage labor market, in politics, as heads of corporations,” said Katherine Franke, director of the Center for Gender and Sexuality Law at Columbia University. “What will unravel once we overrule Roe, I think, will reverberate across the entire society.” 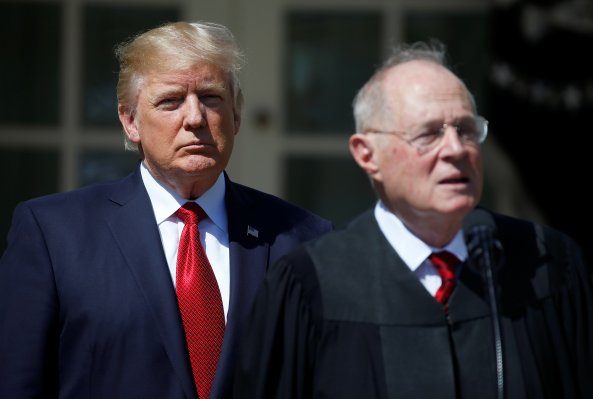 Here's How Donald Trump's Influence on the Supreme Court Compares
Next Up: Editor's Pick