The USS George Washington in the Philippines in 2012.
NOEL CELIS / AFP / Getty Images
By Mark Thompson

The news that the White House is abandoning plans to authorize the retirement the aircraft carrier USS George Washington is the latest example of the nation’s no-brain, no-money defense strategy. The Wall Street Journal reported Friday that the Obama administration vetoed scrapping the flattop after lawmakers urged it be kept steaming.

The White House wants to avoid a political fight on Capitol Hill, where there are concerns that Congress would fight the retirement and open up Democrats to “weak on defense” charges in the midterm elections this fall.

The issue surrounding the GW is whether or not the Navy should invest almost $5 billion to refuel its nuclear reactor—something that happens once in a carrier’s half-century life—if there isn’t going to be enough money to keep her sailing after. For now, it appears that the White House and the Navy have simply decided to refrain from making a decision on the refueling.

Given projected levels of defense spending, nearly all experts maintain that the U.S. Navy won’t be able to keep its 11-carrier fleet sailing. Any efforts to save the carriers, they suggest, will lead to an increasingly unbalanced force. Retiring the GW, which was commissioned in 1992, early—while building a pair of new $20 billion (including planes) Ford-class carriers—suggests the scope of the problem.

“Do we really need 11 carrier strike groups for another 30 years, when no other country has more than one?” then-Defense Secretary Robert Gates asked in May 2010. Four days later, after his remark sounded general quarters throughout the fleet, Gates backed down. “I may want to change things, but I’m not crazy,” he said. “I’m not going to cut a carrier, OK?”

Defense Secretary Chuck Hagel warned last summer that carrier cuts might make sense. “We would trade away size for high-end capability,” he suggested, following a review of the Pentagon’s future last summer. “This would… reduce the number of carrier strike groups from 11 to eight or nine.” This week, in a budget-cutting drill divorced from politics, each of four respected Washington think tanks said the carrier fleet should shrink, at least temporarily, by two to four hulls.

But it seems that high-profile defense items are immune to cuts, which is only going to lead to further budget trouble down the road. The top Democrat on the House Armed Services Committee on Thursday detailed the paralysis that now passes for defense-spending strategy.

“We are going to have to do some series of things that previously were unimaginable, OK?” Rep. Adam Smith (D-Wash.) said. “So we’re going to have to re-adjust our imagination. We’ve simply chosen not to. … We need a strategic response in Congress other than just ‘no, don’t cut that,’… no BRAC [base closures]; no changes to the Guard and Reserve; no shrinkage of the size of the Navy.”

Every day that passes with a military that isn’t rationally calibrated to the dollars coming in is a weaker force.

Militarily, that is. Not politically.

Unfortunately, that weaker force won’t be an issue until it’s too late. 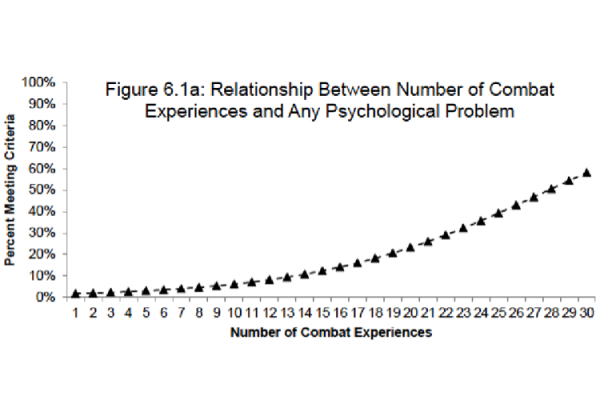 Here's What's Troubling American Troops in One Chart
Next Up: Editor's Pick