Family Separation Is Officially Over, but History Suggests the U.S. Won't Find a Good Solution for Migrant Children

In December 1978, Reverend Gérard Jean-Juste arrived at the West Palm Beach City Jail for a routine check on the dozens of Haitian migrants detained at the facility. Since the early 1970s, thousands of Haitians had sailed on makeshift boats to the Florida coast, carrying stories of oppression at the hands of Haitian leader Jean-Claude Duvalier and looking to claim asylum in the United States. Nearly all of the asylum seekers were placed in Florida jails while their status was adjudicated, many for months on end.

Father Jean-Juste went from cell to cell, making small talk with detainees and setting up appointments with lawyers, until he came across something unexpected: a barefoot 8-year-old girl, sobbing uncontrollably. The child, Roselene Dorsainvil, had arrived on a boat from Haiti with her father two weeks prior, and had been in the jail ever since.

The Immigration and Naturalization Service (INS, the predecessor to Immigration and Customs Enforcement, or ICE) insisted that the child’s incarceration had been a mistake. A singular error they attributed to “a lack of communication.” Jean-Juste and other advocates disagreed: Roselene, they said, had become “a pawn and a hostage” for an immigration service desperate to force her father’s return to Haiti and deter other Haitians from seeking asylum in the United States.

What’s currently happening at the U.S.-Mexico border — from the family separation that resulted from “zero tolerance” immigration policies to the current plan to detain families together — is unprecedented in scale, but the immigration system’s struggle to cope with children is nothing new. As immigration detention has grown explosively over the last century, migrant children have routinely been caught in the crosshairs of a system not designed for them. Though controversy around these detentions has repeatedly spurred bureaucratic apologies and promises of sweeping reform, concerns about the effects of immigration policy on children have done little to stop these problems from happening again.

Before the United States had immigration detention centers and private prisons, it relied heavily on county jails to hold deportable immigrants. There was Ellis Island near the New York harbor and Angel Island in San Francisco Bay, both of which detained enough children to sustain makeshift schools at various points. But for most of the 20th century, if immigration authorities picked up a deportable immigrant away from one of these two immigration hubs, they were likely to be lodged with petty criminals at the closest county lockup.

In 1929, a new law made crossing the border without papers a misdemeanor, punishable by up to a year in jail. Stories of migrant children mixed into the adult jail population proliferated in the local press of borderland communities, often prompting public outcry.

For example, in 1929, immigration authorities detained two toddlers at Del Rio, Texas, “by force of circumstance,” after their parents were caught crossing the border. An investigation showed that the toddlers were fed only meager amounts of food, twice a day, during the 36 days they were held. (The county sheriff contended that he could only afford two meals on the 50 cents he received daily from the Federal Government for holding deportable immigrants in his facility.) The same year, in the furthest reaches of Northern New York, the State Prison Commission found a mother with three children who had been detained in the county jail for over a month after crossing the Canadian border without papers. The immigration service called the family detention “regrettable,” and used the outrage around the incarceration of children to call for a new solution: the creation of federal jails to hold immigrant detainees.

Other times, authorities simply tried to argue that the children they had to cope with weren’t children at all. A 1910 case involved an immigrant named Jem Yuen, who newspapers described as “a Chinese boy locked up in Boston,” detained on the grounds that he was in violation of the Chinese Exclusion Act and was lying about his age. Though Jem Yuen appealed his case all the way to the Supreme Court, he ended up returning to China in what was termed a “voluntary departure” rather than face the prospect of waiting several years in jail before his case was heard.

The U.S.’ reliance on detention waned at the mid-century, as the immigration service adopted a system of “supervisory parole” for both individuals and families, allowing them to remain out of jail as long as they scheduled routine check-in’s with an immigration officer. This policy lasted until 1980, when over 120,000 Cubans fled Fidel Castro’s regime and arrived in Florida, joined by 25,000 Haitian asylum-seekers in that year alone. As policymakers fretted over mass migration from the Caribbean, they began to radically rethink immigration detention; a system that had long relied on a constellation of jails, warehouses and office buildings began to establish permanent detention sites. In 1981, President Reagan instituted a policy of mandatory detention for those who didn’t have a “prima facie claim for admission,” a move intended to deter would-be refugees. This mandate triggered the incarceration of nearly all asylum seeking Haitians and the construction of the first federal immigration detention centers, but it had minimal effect in dissuading migrants and refugees. So the U.S. began experimenting with new tactics, including intercepting boats at sea and sending asylum seekers back to their homeland or to a camp at Guantanamo Bay.

Among the key problems was one that, by then, immigration authorities should not have been surprised to confront: what to do with children. As policymakers debated between returning those who were unaccompanied to Haiti or releasing them to American relatives, the kids withered in a bureaucratic limbo. By 1994, the U.S. was operating a camp at Guantanamo exclusively for Haitian children, known as “Camp Nine.”

The children’s camp at Guantanamo was, by nearly all accounts, catastrophic. Older children staged hunger strikes to protest their incarceration. “Houseparents” who lived in the camps described the children as deeply traumatized, often screaming and sobbing as they lay awake at night. Reports of abuse proliferated. U.S. authorities regularly placed children in flexicuffs and solitary confinement for misbehavior at camp. Many of the children remained in detention camps for over a year. “We just want to get out as fast as possible and go elsewhere,” said a 17-year-old Haitian boy. “We are not criminals, but we are living in a prison.”

Over the last century, as ICE and its predecessors have made incarceration the de facto response to border crossing, the result has been a system that has routinely imprisoned children while simultaneously painting these detentions as an aberration. The events of the past weeks realize the fears that immigrant advocates articulated when they found an imprisoned 8-year-old in 1978: when adults debate immigration law enforcement, children are often an afterthought — until they can no longer be ignored.

Brianna Nofil is a doctoral candidate at Columbia University, specializing in the history of U.S. immigration policy. 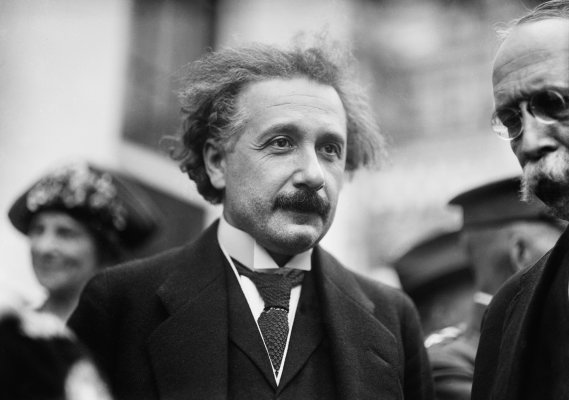 The Real Lesson of the Racial Slurs in Albert Einstein’s Private Travel Diaries
Next Up: Editor's Pick