The U.S. Military Is Preparing to Hold 32,000 Immigrants in Detention Centers

By W.J. Hennigan and Philip Elliott

The U.S. military is preparing to “house and care for” as many as 12,000 members of migrant families, an escalation of the Pentagon’s role in the Trump administration’s “zero-tolerance” policy that will involve multiple detention facilities on southwestern bases.

The new request comes addition to the plans to house as many as 20,000 immigrant children at Defense Department facilities who are apprehended at the U.S.-Mexico border without an adult relative or are separated from parents.

The military is being asked to help provide space to hold the migrants because existing federal facilities are running out of capacity due to the waves of people, mostly from Central America, who are being swept into the system due to the Administration’s policy of referring all border crossers for prosecution. On Monday, Defense Secretary James Mattis identified two Texas military bases as the sites where migrants will be held: Fort Bliss and Goodfellow Air Force Base.

The Trump Administration has yet to publicly identify where the groups of migrants will be held, but an official told TIME that Fort Bliss is being prepared to house families whose adults face criminal charges for the Department of Homeland Security. Fort Bliss, located near El Paso on the Rio Grande river across the U.S.-Mexico border, is an Army base comprised of more than 1 million acres across New Mexico and Texas.

Capacity is an urgent need. The Pentagon said in a statement late Wednesday it needs to be ready for as many as 2,000 people to be ready for detention within 45 days. A senior administration official says the 45-day timeline is likely to be on the long side. The official says the White House is pushing for a quicker ramp-up and expects the Pentagon will be able to deliver.

Meanwhile, the same Administration official says children who arrive on the U.S. border without a parent will stay at Goodfellow under a program run by the Department of Health and Human Services. The base is located further north near San Angelo in central Texas.

The military has had this role before. In 2014, the Obama Administration placed around 7,700 migrant children on bases in Texas, California and Oklahoma. The temporary shelters were shuttered after four months.

The Pentagon says “DHS prefers the facilities to be built in Texas, Arizona, New Mexico, or California to enable access to and supervision of the sites and to comply with the Flores Settlement Agreement’s provision that reasonable efforts be made to place minors in the geographic area where the majority are apprehended.”

If facilities are not available, the Pentagon has been asked to identify available land and “construct semi-separate, soft-sided camp facilities capable of sheltering up to 4,000 people, at three separate locations,” the statement said.

The U.S. military has already carried out its own assessments in taking on more detainees who are awaiting civilian criminal proceedings. TIME obtained an internal Navy document last week that showed preparations to construct sprawling detention centers for tens of thousands of immigrants on remote bases in California, Alabama and Arizona, if called upon to do so.

More than 2,300 children were separated from the adults they crossed the border with, provoking outrage around the world and producing a public relations nightmare for the Administration before President Donald Trump’s about-face last week.

Write to W.J. Hennigan at william.hennigan@time.com and Philip Elliott at philip.elliott@time.com. 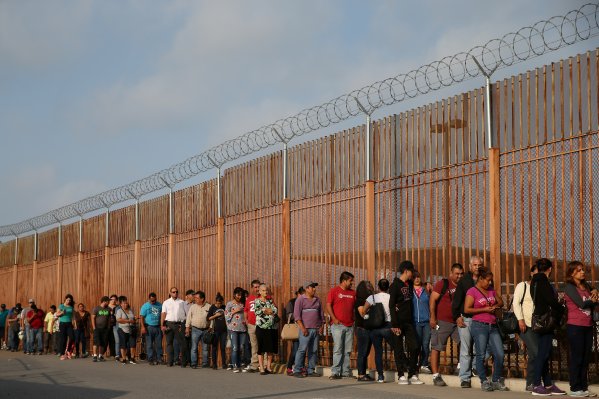