We Finally Know Why Ant-Man Wasn’t in Avengers: Infinity War

Warning: This post contains spoilers for Ant-Man and the Wasp and Avengers: Infinity War.

When fans walked out of Avengers: Infinity War, they were left with so many questions. How will the Marvel Cinematic Universe resolve that massive cliffhanger? Do the stakes in superhero movies really matter? And where, oh where, was Ant-Man (Paul Rudd)?

Along with Hawkeye (Jeremy Renner), Valkyrie (Tessa Thompson) and other fan favorites, Scott Lang (a.k.a. Ant-Man) was conspicuously missing from the throngs of superheroes who joined forces to fight Thanos (Josh Brolin) in the massive Avengers movie.

So that’s where we find Ant-Man in Ant-Man and the Wasp, which takes place between Captain America: Civil War but before the events of Avengers: Infinity War. Fans learn that Scott Lang took the Ant-Man suit from his mentor Hank Pym (Michael Douglas) without permission when he flew to Germany to help Captain America (Chris Evans) fight Iron Man (Robert Downey Jr.) in Civil War. Scott also violated his parole. Since he returned from Germany, he’s been under house arrest for two years.

In order to make amends with Hank, Scott secretly helps Hank and his daughter Hope (Evangeline Lilly’s The Wasp) save Hope’s mother, Janet Van Dyne (Michelle Pfeiffer) from the quantum realm, where she got trapped during a mission 30 years ago. All is resolved with no hint that Thanos has yet attacked Earth.

Paul Rudd and Evangeline Lilly in “Ant-Man and the Wasp”.
Marvel Studios

But the movie’s first end-credits scene seems to take place the day that Thanos snapped his fingers and destroyed half of all life in the universe. Scott, Hope, Hank and Janet are working on an experiment, seemingly blissfully unaware of the impending doom. Scott shrinks down to a tiny size in order to enter the Quantum Realm and retrieve samples. But while he is in the Quantum Realm, he loses contact with the Pym family.

The camera cuts to where the Pyms were standing, and all we see is dust. Like dozens of characters in Avengers: Infinity War, they have disintegrated and floated away. Scott is stuck in the Quantum Realm.

Why didn’t the Avengers call Scott when they first saw Thanos’ cronies land on earth? Maybe they thought he was still under house arrest. Or maybe Scott isn’t as essential to the Avengers team as he thinks. (Hope makes fun of Scott for calling Captain America by the nickname “Cap” throughout the movie.) Or maybe there simply wasn’t time to alert him.

But we do know that Ant-Man won’t be of much help in Avengers 4 until someone finds him in the Quantum Realm and brings him back. Maybe Captain Marvel can assist with that. 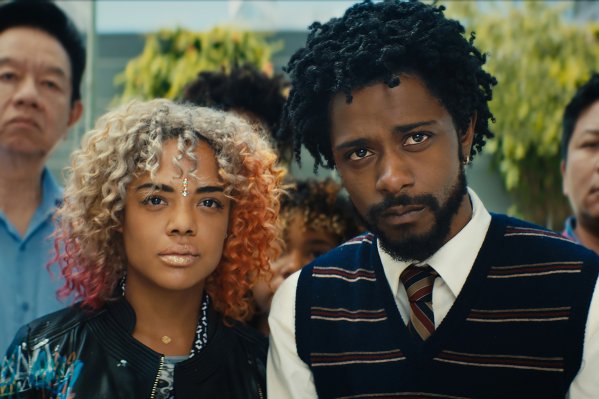 Review: Sorry to Bother You May Be the Most Culturally Relevant Movie of the Year
Next Up: Editor's Pick