Supreme Court Justice Anthony Kennedy will retire this July, paving the way for a possible confirmation showdown in Congress over President Donald Trump’s eventual pick to replace him.

Kennedy, 81, told his colleagues Wednesday that he is giving the President notice of his retirement after serving for over thirty years on the bench. He said his decision came of a desire to spend more time with his family.

“It has been the greatest honor and privilege to serve our nation in the federal judiciary for 43 years, 30 of those years on the Supreme Court,” Kennedy said in a statement. In his letter to Trump, he expressed “profound gratitude” for the opportunity to serve on the court.

Kennedy was nominated to the Supreme Court by conservative Republican President Ronald Reagan in 1987, though his own political ideology has been notoriously difficult to characterize. He wrote the majority opinion in Citizens United v. Federal Election Commission, which struck down a number of campaign finance regulations, and joined the conservative majority in several notable opinions, including Bush v. Gore, the 2000 decision that settled a vote-counting dispute and deemed George W. Bush President of the United States. But he was often seen as a swing vote on closely decided cases, siding with liberal wing on major decisions like Obergefell v. Hodges, which legalized gay marriage in 2015, and writing the majority decision in 2016’s Fisher v. Texas that upheld the University of Texas’ race-based admissions system.

The White House praised Kennedy in a statement, highlighting his commitment to ciivl liberties and calling him a “tireless voice for individual rights.” In brief remarks from the Oval Office during a meeting with Portuguese President Marcelo Rebelo de Sousa, Trump called Kennedy a “great Justice of the Supreme Court,” and said he had met with Kennedy for half an hour on Wednesday before the decision was publicized.

Kennedy’s retirement presents Trump with his second opportunity in two years to nominate a judge to the country’s highest court. The President is likely to pick someone who will further push the court in a conservative direction. Indeed, Trump told reporters Wednesday that he will pick a nominee from a list of potential picks he circulated during his presidential campaign, and that he wanted the replacement process to commence as soon as possible.

Senate Majority Leader Mitch McConnell said Wednesday that the chamber would vote to confirm Kennedy’s replacement this fall. “It is imperative that the President’s nominee be considered fairly and not subjected to personal attacks,” McConnell said.

Democrats responded by saying a replacement should not be confirmed until the next Congress is seated in January, pointing to McConnell’s previous refusal to hold hearings for Judge Merrick Garland, who then-President Obama nominated to the Supreme Court after the 2016 death of Justice Antonin Scalia. At the time, McConnell argued that a President should not be able to nominate a Supreme Court justice in his or her final months in office — a position that Democrats are already using as ammunition against him now.

“Senator McConnell set the new standard by giving the American people their say in the upcoming election before Court vacancies are filled,” U.S. Senate Democratic Whip Dick Durbin, who sits on the Judiciary committee, said in a statement. “With so much at stake for the people of our country, the U.S. Senate must be consistent and consider the President’s nominee once the new Congress is seated in January.”

Democrats can rail against McConnell’s timeline, but they can’t do much to change it. Unlike the Republicans in 2016, they don’t control the Senate chamber, meaning they can’t put a stop to confirmation hearings. And Republicans only need a simple majority to confirm Trump’s eventual nominee, making it more likely that a new justice could be in place before the midterm elections.

Whomever Trump picks, the process is likely to cause an outcry among liberals as a whole, exacerbating their fears over the Supreme Court’s ideological direction at a time when it the judiciary is increasingly seen as a potential check on Trump’s most controversial policies. 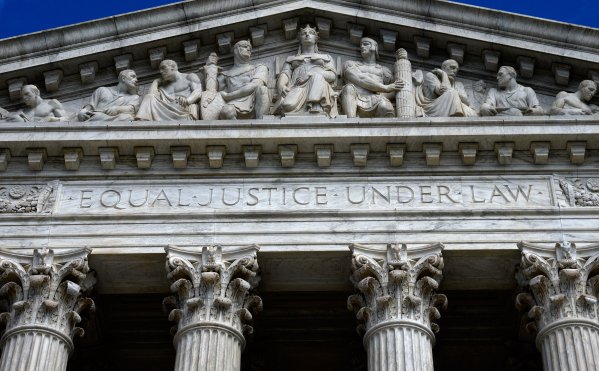 The Supreme Court Overturned a Ruling That Enabled Internment of Japanese-Americans
Next Up: Editor's Pick