'Our Voices Were Heard.' Dozens of Teachers Advance in Oklahoma Primaries After Walkouts

More than two months after teachers walked out across Oklahoma to call for better pay and more education funding, dozens of educators advanced Tuesday in their effort to unseat incumbent lawmakers, who they say have neglected education in the state.

Two Republican state representatives who voted against a tax hike to fund teacher raises this year lost their primaries. They were among six GOP state lawmakers who lost to primary challengers on Tuesday, the Tulsa World reported. Several other Republican incumbents were forced into runoff elections.

“Our voices were heard tonight,” said Oklahoma City assistant principal Sherrie Conley, according to the Associated Press. Conley will compete in a runoff election against Republican state Rep. Bobby Cleveland, who voted against the tax increase for teacher raises.

Another Republican, state Rep. Kevin McDugle, narrowly won his primary by just three votes against a candidate who withdrew from the race weeks ago. In November, McDugle will face Democrat Cyndi Ralston, a teacher who declared her candidacy after McDugle criticized educators who flooded the state capitol during the walkout. “I’m not voting for another stinking measure when they’re acting the way they’re acting,” he said in a Facebook Live video, which has since been deleted. “Go right ahead, be pissed at me if you want to.” McDugle later apologized.

In another instance, a Republican who supported the tax bill, state Rep. Scooter Park, lost to middle school teacher Toni Hasenbeck, who did not participate in the teacher walkout and said she wants to more better allocate funding for education without raising taxes. Park had defeated Hasenbeck in the 2014 general election for the same seat, when she ran as a Democrat.

Overall, nearly four dozen educators won their primary contests or advanced to a runoff election on Tuesday, according to a list shared by the Oklahoma Education Association.

Republican Randy Randleman, a retired school psychologist and former teacher, will face educator Judy Ross Moore in the District 15 race for state representative. The seat is currently held by a Democrat whose term limit expires this year.

In the race for state representative in District 68, Angela Statum — a kindergarten teacher in Tulsa — and Michael Ross — a high school teacher in Sand Springs — will face off in a Democratic primary runoff election. The seat is currently held by a Republican lawmaker, who is now running for Insurance Commissioner.

The Oklahoma Education Association had identified about 100 educators running for office in the state this year. While congratulating those who won Tuesday, the group also thanked the teachers who had tried.

“Thank you to those who ran but came up short tonight. Your hard work and campaigning has started countless conversations about how to improve education in Oklahoma,” the association said in a Facebook post on Wednesday. “Running for office is brave — a quality of so many educators and support professionals. Regardless of how the votes tallied up tonight, THANK YOU for once again standing up for your students and working on behalf of education in our state. Oklahoma is better for it.”

Melanie Spoon — a middle-school librarian in Oklahoma City who decided to challenge Republican state Rep. Mike Osburn after he wouldn’t meet with her during the walkout — came up short against Osburn in Tuesday’s primary, with 22% of the vote.

“I took my shoes that I wore down at the capitol during the walkout, and I used those same shoes to walk my neighborhood and talk to the people in this area and say, ‘I’m a teacher and I’m a woman, and I think we can do better,'” Spoon told TIME on Tuesday.

“I cast my ballot and got back to my car and kind of sat there and cried a little bit and thought, ‘I did this. I did this thing. Win or lose — I did the best that I could.’ I’ll always have this to carry with me. Can you imagine what would change in our society if we just put our words into action and actually did things to make it better for everybody?” 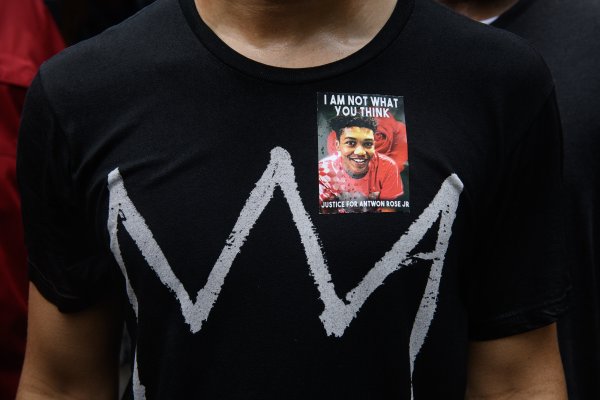 'No Justification' for Officer to Shoot Unarmed Teen Antwon Rose, DA Says
Next Up: Editor's Pick