Saudi Arabia lifted its longstanding driving ban on June 24, as part of a new wave of reforms introduced under the leadership of Saudi Crown Prince Mohammed Bin Salman.

It marks a long-awaited moment for Saudi women, but comes amid a crackdown on women’s rights defenders and campaigners, some of whom remained imprisoned as the world’s last remaining ban of its kind was lifted.

TIME’s Africa Bureau Chief Aryn Baker answered questions in an hourlong Reddit AMA session on June 26. Two days earlier, she took a ride in Riyadh with the country’s first female taxi drivers, who celebrated the use of their newly issued drivers’ licenses.

Baker has been reporting for TIME for 18 years, and on Africa and the Middle East for the past eight. She has reported from Saudi Arabia several times, and in 2011, attended a protest drive led by women fighting for their right to take the steering wheel.

Here are six takeaways from Baker’s AMA session on the lifting of the driving ban, Saudi Arabia’s reforms in general, and more.

Why are people so excited about such a small baby step?

It might be symbolic, but its still very important. Up until now, women were absolutely at the mercy of the men in their lives, whether its a brother, father, husband or hired driver. Imagine having to ask someone for a ride every time you wanted to go somewhere. There is almost no public transportation here, and Uber-type services were only recently introduced (and expensive).

Wouldn’t this be considered more of a PR move for Saudi Arabia than actual change in the right direction for women there?

I think a little of both. This really was a big PR event for the Kingdom, and many of the events were stage managed. But women have been campaigning for the right to drive for 30 years, and it’s still a very big deal that opens many many doors. And yes, women have been able to own cars for ages—they just hired drivers to drive them. And they can get their licenses without permission. But they still can’t leave the country or get married without permission from a male relative (guardian), so there are still steps to take.

What do you think will happen to women that have been prosecuted for driving?

It’s not looking good. So far, they haven’t even been charged, let alone prosecuted. But right after they were detained, local papers branded them as traitors – and that is a serious sentence here, up to 20 years.

Do you have to wear a headscarf in public in Saudi Arabia?

When I was last here, five years ago, I did—I was even stopped by the religious police for letting my hair show. Now it’s totally different, I wear the abaya, but I don’t wear my scarf, and no one notices. It’s not just because I am a foreigner, either. I’ve seen a lot of young Saudi women going without. Mostly it depends on how conservative your family is, but since the religious police don’t have any powers of arrest anymore, women have much more choice.

Yes! They see it as a huge opportunity. Jaguar, Range Rover, Ford, Nissan—they all put out special notes of congratulations when the announcement first came back in September, and then rolled out huge marketing campaigns. They even hired and trained Saudi saleswomen, some of which are already earning huge commissions.

What’s the scariest situation you’ve found yourself in when reporting during your career?

I was pinned down by a Taliban ambush in the Korengal valley in Afghanistan while out with the U.S. military. That was pretty scary. So was reporting on Ebola in Liberia. Every time I felt slightly tired, headachy or hot (which happens a lot in a hot country) I went into full panic mode, thinking i had caught it. 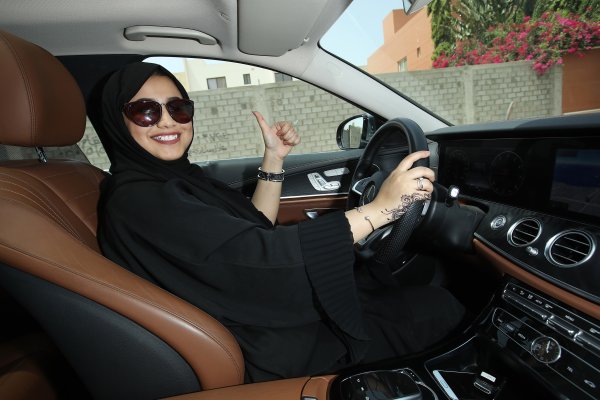