President Recep Tayyip Erdogan has cemented himself as the strongman of Turkey, after his coalition won presidential and parliamentary elections that will extend his powers and possibly his rule for as long as a decade.

Erdogan’s coalition gained around 53% of the vote with close to 90% turnout, according to the state broadcaster, meaning he will extend his 15-year rule for at least another five – with the potential to control Turkey until 2028.

“Turkey has given a lesson in democracy to the whole of the world,” he claimed in his speech. Elsewhere, his opponents cried foul with accusations of an unjust race, saying Erdogan’s party had the unfair backing of the state and the opposition was cowed by emergency laws.

The election has crucial implications for regional security, refugee flows, and world democracy — but also for Turkey itself, at the crossroads between Europe, Russia and the Middle East. Here’s what it will mean:

A change to the shape of the Turkish state

Last year, Erdogan held and narrowly won a referendum on amending Turkey’s constitution. The changes, which come into effect following this election, include a shift away from a parliamentary system to an executive presidency.

Erdogan will gain the power to issue decrees, appoint public officials including ministers and judges, decide the budget and control the military and the police. By contrast the power of parliament will be diminished and the role of prime minister abolished.

A big question is whether victory will prompt Erdogan to end the state of emergency the country has been in since 2016, when a failed coup nearly resulted in his assassination. Under the emergency, Erdogan has dismissed over 100,000 public officials from their posts. Over 50,000 people are in jail awaiting trial, including 9 Kurdish lawmakers. Wikipedia is banned, and Erdogan’s party holds a virtual monopoly on political television airtime.

His opponents fear that increased presidential power will lead to one-man rule. But Erdogan has long held similar powers under the emergency. If he lifts it, there is a chance the opposition will gain some space to breathe. Even if he does, Erdogan will be more powerful than ever before.

The end of secular Turkey?

Turkey was founded in 1923 as a secular republic. A key principle was the separation of religion from public life, despite the country’s large Muslim majority. For nearly a hundred years that secular system held, with its founder, Mustafa Kemal Ataturk, occupying a revered status as father of the nation.

Now, Turks are more likely to see large images of Erdogan’s face in public than Ataturk’s. Erdogan has a large conservative Muslim base, and his popularity derives in part from his assertions that Turkey is a Muslim country – contrary to the founding principles of the nation.

But the country is deeply polarized on the issue of secularism and it was a key battleground in this election.

Erdogan has spoken of wanting to raise a “pious generation,” implementing an Islamic curriculum in schools around the country. He has led calls to end the ban on headscarves in public institutions, a longstanding gripe amongst pious Muslims who feel discriminated against by the policy. A giant mosque, a pet project of Erdogan’s, is under construction overlooking Istanbul.

Just as Ataturk shaped the country in his image, Erdogan has worked to shape it in his own. Now, with the powers he has long coveted secured, Turks can expect Islam to occupy an ever greater position in public life.

A strained relationship with the West

When he came to power in 2003, Western leaders courted Erdogan, seeing him as a liberal leader they could work with in the Islamic world in the aftermath of the Sept. 11, 2001 attacks.

No more. Although Turkey is a NATO member and has applied to join the E.U., its leader has been critical of both. Erdogan recently bought a missile defense system from Russia, ringing alarm bells in NATO headquarters, and his leadership style is far closer to Putin’s than to leaders of Western Europe.

Western leaders need to keep Erdogan on side. The E.U. has struck a 1.8 billion Euro deal with Turkey in an attempt to stem the flow of refugees into the continent, while Turkey is also a key player in the war in Syria. Relations are already strained thanks to the U.S.’s support of Kurdish fighters which Turkey views as belonging to a terrorist group. With the war inching towards a possible showdown, those disagreements could flare in the near future.

In his victory speech, Erdogan argued that the high turnout meant Western nations could not claim his elections were a sham. “Some countries which have low turnout at elections claim they are models of democracy,” he said. “The turnout rate is very low and they look down on Turkey for being undemocratic.”

Erdogan is only the latest in a series of strongmen who have sought to confer the legitimacy brought by democracy whilst using authoritarian powers to stack the odds in their favour. Russia’s Putin and Hungary’s Viktor Orban have won elections in similar circumstances this year alone.

Using the mechanisms of democracy gives Erdogan legitimacy, but with a margin of victory of just 53% it also leaves open an avenue for opposition candidates to topple him.

A defeated but rejuvenated opposition

When Erdogan called the snap election in April, it looked like he would sail to victory thanks to fractured opposition and wide popularity. But opposition parties mounted a surprise rally, and at points it looked like Erdogan could be threatened. In the days before the election, opposition rallies drew crowds of over a million onto the streets in Istanbul – a sight unimaginable just months earlier.

Erdogan’s main presidential rival, Muharrem Ince, conceded on Monday that Erdogan had won — if not entirely fair and square, then at least comprehensively. “Did they steal votes? Yes, they did,” he said in a press conference at his party’s headquarters. “But did they steal 10 million votes? No.”

The opposition’s main complaint seems not to be vote rigging – as it was during the referendum campaign last year – but that Erdogan unfairly benefited from the vast resources of the state which he poured into his campaign. “There is no big gap between the Supreme Election Board data and the data that we collected ourselves,” Ince said. “The difference is not big enough to change the outcome.”

Although by law candidates are promised equal airtime, this rule was openly flouted. One candidate, the Kurd Selahattin Demirtas, ran his campaign from prison. His party succeeded in gaining the 10% of votes it needed to enter parliament, but it was not enough to deprive Erdogan’s coalition of a majority.

The plurality of the opposition will give some Turks hope. Although they remain under threat, the democratic institutions of the state still stand. 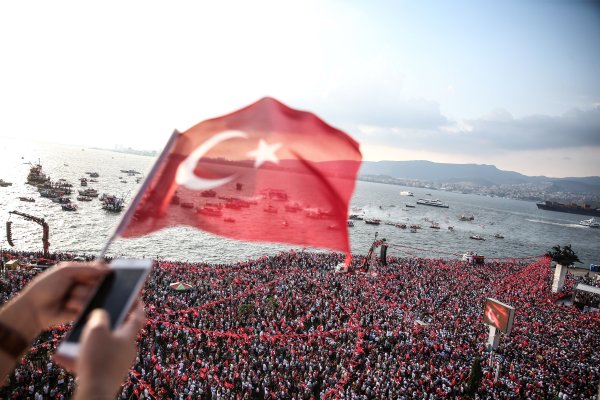 Turkey's Elections May Be Imperfect But They Still Matter
Next Up: Editor's Pick