Octavia E. Butler, Who Brought Diversity to the World of Science Fiction, Honored With Google Doodle

Octavia E. Butler would have turned 71 on Friday
Google
By Billy Perrigo

Octavia E. Butler, a groundbreaking African-American science fiction writer who would have turned 71 on Friday, was honored with a Google Doodle that celebrates her contributions to the literary world.

Butler was one of the first writers in science fiction — traditionally dominated by white male authors — to include diverse protagonists in her stories, and was widely admired for evocatively exploring hierarchies and human flaws in her work.

Butler died in 2006, but her family released a statement to coincide with Friday’s Google Doodle that paid tribute to her legacy.

“Her spirit of generosity and compassion compelled her to support the disenfranchised,” her family said in a statement. “She sought to speak truth to power, challenge prevailing notions and stereotypes, and empower people striving for better lives. Although we miss her, we celebrate the rich life she led and its magnitude in meaning.”

Throughout her life, Butler won various awards and became the first science-fiction author to get the MacArthur Fellowship. Here’s what you need to know about her prestigious career:

Butler won two Nebula awards and two Hugo awards in her career, two of the most prestigious prizes in science fiction. Two of those awards were for the same short story, Bloodchild, in which human refugees are imprisoned on an alien planet by insect-like creatures that protect them while using them as hosts to breed their young. Butler insisted the story was not an allegory for slavery while critics applauded it for reversing gender roles and examining the complex structures of oppression.

In 1995, Butler became the first science-fiction author to be awarded the prestigious MacArthur Fellowship. The award came with a prize of $295,000. The foundation said Butler’s “imaginative stories are transcendent fables, which have as much to do with the future as with the present and the past.”

Last year, it was announced that Ava DuVernay, who recently directed A Wrinkle In Time, would be adapting Butler’s book, Dawn, into a television series. It is not clear what network will pick up the show just yet.

In the book, the protagonist — a black female — wakes up 250 years after a nuclear holocaust, to find that humans have been rescued by aliens with three genders. In return, the aliens want to interbreed with humans to create a hybrid species. 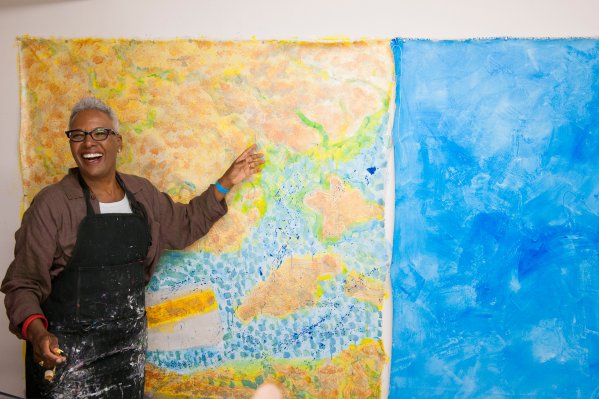 This Woman Went to Art School in Her 60s, Proving It’s Never Too Late to Pivot
Next Up: Editor's Pick