By Philip Elliott and W.J. Hennigan

The U.S. Navy is preparing plans to construct sprawling detention centers for tens of thousands of immigrants on remote bases in California, Alabama and Arizona, escalating the military’s task in implementing President Donald Trump’s “zero tolerance” policy for people caught crossing the Southern border, according to a copy of a draft memo obtained by TIME.

The internal document, drafted for the Navy Secretary’s approval, signals how the military is anticipating its role in Trump’s immigration crackdown. The planning document indicates a potential growing military responsibility in an administration caught flat-footed in having to house waves of migrants awaiting civilian criminal proceedings.

The memo also proposes a camp for as many as 47,000 people at former Naval Weapons Station Concord, near San Francisco; and another facility that could house as many as 47,000 people at Camp Pendleton, the Marines’ largest training facility located along the Southern California coast. The planning memo proposes further study of housing an undetermined number of migrants at the Marine Corps Air Station near Yuma, Arizona.

The planning document estimates that the Navy would spend about $233 million to construct and operate a facility for 25,000 people for a six-month time period. The proposal suggests these tent cities be built to last between six months and one year.

Capt. Greg Hicks, Navy’s chief spokesman, declined to provide details on the matter. “It would be inappropriate to discuss internal deliberative planning documents,” he told TIME.

Although the military has not yet been ordered to construct these new detention facilities, it is clear it bracing to join a policy challenge that is ricocheting throughout the whole of government. What began as a crackdown on immigrants crossing the border illegally has now spread to the departments of Justice, Homeland Security, Defense and Health and Human Services.

The memo was written by Phyllis L. Bayer, the Assistant Secretary of the Navy for Energy, Installations and Environment, in anticipation for a request from the Department of Homeland Security. It recommends Navy Secretary Richard Spencer sign off on the plan, which allocates roughly 450 square feet per immigrant held for housing, support staff and security, and send it to Defense Secretary James Mattis.

Mattis’ office declined to comment on the proposed plan obtained by TIME.

Trump on Wednesday ordered the Pentagon to work with the Department of Homeland Security to house the tens of thousands of immigrants currently being held awaiting criminal proceedings for crossing the U.S.-Mexican border illegally. Under the administration’s so-called “zero-tolerance” immigration policy, current facilities are at their breaking point and the immigration courts face deep backlogs. At the same time, children who previously had been separated from their parents are now going to be held with the adults, further straining the system.

The Pentagon has been asked make preparations on military bases to house as many as 20,000 house immigrant children who are apprehended at the U.S.-Mexico border without an adult relative or separated from parents, U.S. military officials said. Department of Health and Human Services completed assessments this week at Goodfellow Air Force Base, Dyess Air Force Base, Fort Bliss in Texas and Little Rock Air Force Base in Arkansas for potential use for the Unaccompanied Alien Children program.

“While four bases (3 in Texas and 1 in Arkansas) have been visited by HHS for possible housing, it doesn’t mean any or all children would be housed there,” Army Lt. Col. Jaime Davis, a Pentagon spokesman, said in a statement.

Earlier this week, Mattis deferred questions on the matter to the Department of Homeland Security but did acknowledge the military’s willingness to help with the Trump Administration’s latest crisis. “We have housed refugees,” he told reporters Wednesday at the Pentagon. “We have housed people thrown out of their homes by earthquakes and hurricanes. We do whatever is in the best interest of the country.”

Currently, migrant children are being held in facilities run by the Office of Refugee Resettlement within the Department of Health and Human Services. One facility, a converted Walmart in Texas, was recently opened to reporters, igniting a media firestorm.

Using military bases in this way is not new. In 2014, the Obama Administration placed around 7,700 migrant children on bases in Texas, California and Oklahoma. The temporary shelters were shuttered after four months. 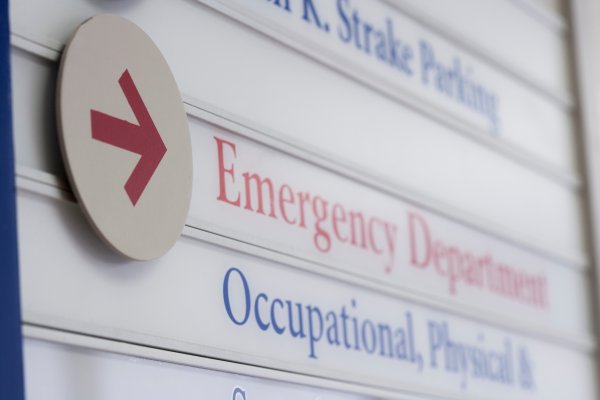 'They Are Coming With Little to Nothing.' How New York City Doctors Are Treating Migrant Children
Next Up: Editor's Pick