May was packed with primary congressional elections, giving political donors and special interests plenty of opportunities to try to influence outcomes.

Here’s a by-the-numbers look at the highlights:

Women Vote! sold the Baidu Inc. stock on May 10, according to FEC records. The money Women Vote! earned from the stock sale, which occurred as trade and economic tensions between the United States and China were rapidlyescalating, represents more than half the money the Democrat-backing super PAC collected during May.

“We cleared the donation through our lawyers,” Emily’s List press secretary Alexandra De Luca told the Center for Public Integrity. “They didn’t see a problem as it’s a publicly traded company” on the NASDAQ exchange.

“The super PAC may feel a debt of gratitude to Karla, not to Baidu,” said Brendan Fischer, director of federal and FEC reform at the Campaign Legal Center. “The timing of the donation and selling of the shares was close. One scenario that might have raised eyebrows: If the group held on to the shares, leaving the financial interests of the super PAC tied up with the financial success of the company. But it doesn’t seem like that was at play here.”

Karla Jurvetson is the former wife of venture capitalist Steve Jurvetson, who in the past three years has been accusedof sexual harassment — he deniesthe accusations — and hasleftthe firm he helped found.

2: Number of registered federal lobbyists — including one who advocates for the private prison industry — that raised money for the Democratic Congressional Campaign Committee in May. Jessica Straus, former finance director for the campaign committees of Democratic Sens. Chuck Schumer and Barbara Boxer and now director of government affairs at Dish Network, raised $72,250. Richard Sullivan, a lobbyist with State Federal Strategies and formerDemocratic National Committee finance director, raised $24,400. Sullivan currently lobbies for several companies, including the GEO Group, which specializes in private prisons and operates severalICE detention facilities. In general, detention facilities have been under greater scrutiny because of a government policy— Trump amendedit Wednesday amid witheringcriticism — that’s resulted in the separation of immigrant families suspected of illegally entering the United States. The 2016 Democratic Party platformsaid Democrats would “fight to end federal, state, and municipal contracts with for-profit private prisons and private detention centers.”

$5,400:Amount actor Alec Baldwin, who portrays Trump on Saturday Night Live, contributed to the campaign of Democrat Liuba Grechen Shirley, who is running for New York’s 2nd District seat. Grechen Shirley made headlinesin May when the FEC ruled that she could use campaign funds to pay for childcare expenses.

0: Number of donors, known before Virginia’s June 12 primary, who gave money to a group called Defeat Slavery, which poured more than $160,000t o support Democrat Alison Friedman in the Virginia 10th District race. Friedman lost her primary to Jennifer Wexton, who will face Republican incumbent Rep. Barbara Comstock. Defeat Slavery wasn’t required under federal law to disclose its donors because it began spending just several days prior to the election. Instead, it’s first scheduled to report its donors next month.

25: Number of days after the U.S. Senate Ethics Committee “severely admonished” Sen. Bob Menendez, D-N.J., that Facebook’s political action committee contributed $1,000 to Menendez’s re-election campaign. Facebook spokesman Andy Stone declined to say why Facebook’s PAC contributed to Menendez’s campaign, instead referring the Center for Public Integrity to the company’s political engagement policy, which in part states: “In deciding which federal candidates to support, Facebook PAC considers whether an individual candidate’s policy stances are consistent with Facebook’s public policy agenda and business interests, particularly the individual’s commitment to fostering innovation and an open Internet.” A week after Facebook PAC’s contribution, the PAC of Comcast/NBC Universal contributed $7,000 to Menendez’s campaign. Federal prosecutors tried Menendez on corruption charges related to his relationship with a wealthy campaign donor. But a jury deadlocked in November, and prosecutors decided in January to not retry Menendez.

$51,909: Amount the John Bolton Super PACspent in May, after stating in March it would suspendits political activities ahead of namesake John Bolton becoming Trump’s national security adviser. Most of the expenditures went toward legal and communication consulting fees. The super PAC also kept two employees on its payroll, including Kathy Flavin, who last month declinedto explain why the super PAC and related John Bolton PAC retain Bolton’s name despite Bolton disassociating himself from the groups. The John Bolton PAC, for its part, spentnearly $49,000 in May.

$542,000: Amount super PAC House Freedom Action spent this year boosting its favored Republican candidates. The group, backed by megadonors such as Uline CEO Richard Uihlein and Ariel Corporation Vice PresidentTom Rastin, spent $121,000in May on a media buy and digital ads to support Republican Stephen Bloom, who lost his congressional primaryin the race to represent Pennsylvania’s District 13, as well as smaller five-figure ad purchases for House races in Ohio and New Mexico.

0: Number of donations that pro-Trump super PAC Make America Number 1 collected during May. The group, run and majorly funded by members of the wealthy Mercer family, did spend $28,000 on legal consulting to Greenberg Traurig, the former law firm of Trump lawyer and former New York City Mayor Rudy Giuliani.

2:Number of sports team-owning billionaires who donated to Vice President Mike Pence’s leadership PAC, the Great America Committee. Houston Texans owner Robert McNair and Chicago Cubs owner Joe Ricketts each donated $5,000. McNair has previouslydonated to super PACs that aim to maintain Republican control of the U.S. House and Senate as well as the pro-Trump Great America PAC. The conservative Ricketts family maintains close ties with the Republican party. Todd Ricketts (Joe Ricketts’ son and himself a Cubs co-owner) was namedfinance chairman of the Republican National Committee in January and was previously Trump’s nominee for deputy commerce secretary. (Ricketts withdrew before the Senate voted on confirming him.)

91.8: Percent of money preeminent Democratic super PAC Priorities USA Actionraised in May from non-human sources. They include other super PACs, such as House Majority PAC and Senate Majority PAC, and labor interests, including the International Brotherhood of Electrical Workers Political Action Committee and Laborers Political League Education Fund.

$120,620: Spending during May by Jill Stein’s 2016 Green Party presidential committee, which for months had failedto file mandatory federal campaign finance disclosure reports. (It finally beganthe retroactive filing of its disclosures in early June.) The Stein committee’s May spending went mostly toward legal fees and paying a small staff that continues to work for the committee.

13: Number of six-figure contributions received by super PAC Senate Majority PAC, which aims to elect Democrats into the Senate. The group, which raised $3.9 million during May, collected $1 million combined from the billionaire couple Reed Hastings, the CEO of Netflix, and his wife, Patty Quillin, director of Meadow Fund, a donor-advised fund. This is down from previous months: Senate Majority PAC brought in $8.7 million in April and $14.1 million in March.

3/4:Fraction of the $800,000 raised in 2018 by super PAC Hoosiers for Conservative Values that qualifies as “dark money” — the kind not easily traced back to a root source. Hoosiers for Conservative Values backed Republican Rep. Luke Messer in the Indiana primary, which he lost to fellow Republican Mike Braun. This super PAC raised $600,000 from the American Economic Freedom Alliance, a nonprofitthat’s not required to disclose its donors.

“This is something we’ve seen emerging over the past few cycles,” said Fischer of the Campaign Legal Center. “Even though the super PAC discloses its donors, the public still doesn’t know the full extent of the super PAC’s finances because there is dark money in the mix. It allows a donor the anonymity they want.”

American Economic Freedom Alliance has a stackedroster of veteran Republican political operatives and lawyers linked to the vice president, including Michael Adams, a lawyer for Mike Pence’s leadership PAC and Marty Obst, Pence’s campaign manager. The American Economic Freedom Alliance itself aired adslast year asking Trump to “protect Americans from a dumb tax [imposed by the Affordable Care Act] that drives up their premiums.”

5/6: Fraction of Club for Growth’s May income — not counting a $1 million cash bump from Club for Growth’s Missouri branch — that came from Richard Uihlein, who gave $500,000. Uihlein and his wife, Elizabeth, have spent close to $30 millionon the midterm elections so far.

6: Number of people identified as a “teacher” or “professor” who in May made contributions to the National Rifle Association of America Political Victory Fund that were sizable enough to require they be publicly reported. In the aftermath of the Marjory Stoneman Douglas High School mass shooting in February, numerous students and educators have called for a boycott of businesses who support the National Rifle Association.

$375: Amount that “Anonymous Anonymous” of “N/A, Virginia” has reportedly contributed to the National Rifle Association of America Political Victory Fund during 2017 and 2018. “DFGDFG” is how “Anonymous lists his — her? — occupation. Federal law requires political committees to publicly disclose the name, address, employer and occupation of anyone contributing more than $200 during a two-year election cycle.

$80 million: Amount billionaire businessman and former New York City Mayor Michael Bloomberg plans to spend mostly to boost congressional Democrats in the 2018 midterm elections, according to the New York Times. Bloomberg also committed to support gubernatorial candidates of both parties who have “shown strong leadership on gun safety, the environment, education and other critical issues facing the country.”

$500,000: Donation from Crow Holdings Pool — a limited liability company connected to the Crow Holdings real estate empire — to conservative super PAC American Crossroads. The company has given such sizeable contributions in the past, such as $125,000 to pro-Ted Cruz super PAC Trusted Leadership PAC.

$265,891: Amount of money the Conservative Leadership Alliance, or CLA Inc., dropped on ads released Tuesday that target Lee Bright, a Republican candidate running for South Carolina’s 4th Congressional District seat. The group has spent about $25,000in support of Bright’s establishment Republican opponent Joshua Kimbrell and around $291,000 total opposing Bright. CLA Inc., is a 501(c)(4) “social welfare” nonprofit that doesn’t disclose its donors. But as the Center for Public Integrity reported in May, CLA Inc. is led by a longtime lobbyist for electric company FirstEnergy, which Ohio congressional candidate and state Rep. Christina Hagan said pressured her — unsuccessfully — to vote for legislation it supported. After Hagan declined, CLA Inc. spent tens of thousands of dollars to help defeat her.

$1.5 million: Amount raised in May by super PAC Planned Parenthood Votes. It’s the mostmoney the group has brought in during any single month since January 2017.

$14.58 million: The Republican National Committee’s haul in May, breaking its record for non-presidential year fundraising for the second month in a row. The RNC raised $12.99 million in April.

$1,533: Amount super PAC NextGen Climate Action Committee spent on pizza for event food in May. The super PAC is led by liberal billionaire Tom Steyer, who ranks among Democrats’ most generous patrons.

$577.98: Available money, through May, reported by Impeach This Racist Unqualified Misogynist President PAC, a federally registered political committee that has, to date, failed to turn anti-Trump angst into cold, hard cash. 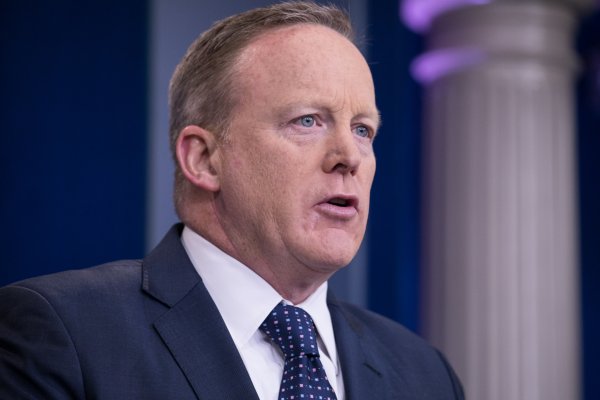 Sean Spicer's Next Job Is at a Pro-Trump Super PAC
Next Up: Editor's Pick