‘There Is No Way We Can Turn Back.’ Why Thousands of Refugees Will Keep Coming to America Despite Trump’s Crackdown

The bullet wound in Francis Gusman’s spine makes it hard for her to travel. When gangs shot at each other in her hometown of Yoro in Honduras in 2016, she was hit by a stray round and has been unable to walk since. But when gang members then murdered her sister this February, she decided she had to leave, however hard the journey.

She set off on the dangerous migrant trail north, along with her husband, 12-year-old son, and her sister’s orphaned 13-year-old daughter. After crossing the Mexican border, her husband and a friend had to carry her 36 miles along the road to this town of Tenosique in southeast Mexico. Here they have applied to Mexico for refugee status, arguing the gangsters who killed her sister could target her niece for being a potential witnesses or go after other family members.

“I pray to God, we will be approved asylum. Because there is no way we can turn back,” Gusman, 32, told TIME in early June, sitting outside a migrant hostel in a wheelchair provided by a local charity. “There is too much violence in Honduras now, from gang members, from drug cartels, from police.”

Read more: A reckoning after Trump’s border separation policy: What kind of country are we?

Gusman’s story illustrates the brutality that is pushing many to leave the Northern Triangle of Central America, which includes Honduras, Guatemala and El Salvador, and seek refuge in nearby countries, including Mexico and the United States. The number of asylum applications in Mexico has rocketed, from 2,000 in 2014 to more than 14,000 last year, with Honduras as the leading source of applicants, according to the United Nations Refugee Agency (UNHCR).

However, this surge comes as more Mexicans are themselves fleeing violence to seek refuge in the United States. In the first three months of 2018, the Northern Triangle nations and Mexico made up four of the six top source countries of applicants for U.S. asylum, government data shows.

“People are leaving because they are suffering from high levels of violence from gangs and other organized criminal groups. These gangs want to recruit minors, they carry out extortion, kidnapping, sexually abusing girls,” says Francesca Fontanini, spokesperson for the UNHCR in the Americas. “This flow of families from Central America will not stop because if the root causes are still there these people will keep coming to the U.S. or to other countries.”

The violence in the region is driven by a mix of crime groups, from street gangs such as the Mara Salvatrucha to drug cartels that move billions of dollars. The gunmen not only target rivals but regularly go after “civilians” sometimes just for being in the wrong place in the wrong time.

In the city of San Pedro Sula, Honduras, Suyapa Lopez, a 37 year old single mother, described how her two sons disappeared in 2016 after they were selling bottled water and crossed from a territory controlled by the Barrio 18 gang to one controlled by the MS13 gang. She has found no trace of them since, despite repeatedly going to the police. “The police only help who they like,” she told TIME in October. “Imagine how it feels, a mother destroyed and without help from anybody. Just asking God to open the doors.”

Asylum cases filed by people fleeing criminals can be difficult to win in many countries. Under refugee conventions, people are given protection if they are persecuted because they belong to a specific social group, particularly a minority religion, or if they are targeted by their government. Even when people fleeing cartels prove their life is in imminent danger, judges will deny their claims, saying it is just generalized violence.

However, Andrea Garcia, an immigration lawyer in California, says that courts need to recognize that criminal gangs in Latin America are often working directly with police and politicians. “Here in the United States, we have this vision of the war on drugs and there [are] the good guys and the bad guys. We don’t really see the nuances of the infiltration of the cartels in Mexico and the effect on the common person,” she says. “If someone is on the bad side of the cartel, they have no chance in their home country.”

The Trump administration, however, is going the other way. On June 11, Attorney General Jeff Sessions issued a ruling reinforcing the arguments to deny asylum seekers. “The mere fact that a country may have problems effectively policing certain crimes or that certain populations are more likely to be victims of crime, cannot itself establish an asylum claim,” he wrote.

Many who seek refuge in the United States are also now being held in detention facilities while they wait for their day in court. The American Civil Liberties Union has documented cases where mothers were separated from their children even after legally making their claim. The family separations should be stopped by the executive order signed by President Donald Trump on Wednesday, but it does leave room for exceptions by saying families should be detained together, “where appropriate and consistent with law and available resources.”

With the threat of detention and the likelihood of losing the case, some fleeing violence choose simply to cross without papers and hide in the shadows. “People are desperate. I don’t know what evil you pick,” Garcia says.

Those seeking asylum in Mexico have a better chance of winning their cases with half of completed applications by Hondurans approved here, according to the UNHCR. Furthermore, applicants are not held in detention but released while they wait, as long as they stay in the same state.

“They have bigger hearts in Mexico than in the United States,” said Gusman, sitting in her wheelchair outside the hostel. “How can they separate children? That is inhuman. Do they know what a mother feels like not being with her child? They don’t know what it is to suffer.”

Still, applying for asylum in Mexico has its own problems. Violence in parts of the country is as bad as in the Northern Triangle. In 2017, journalist Edwin Rivera fled threats in Honduras, only to be murdered in Veracruz, Mexico. Mexican cartels have also kidnapped Central Americans en masse, demanding ransom money from any family members in the United States. “Mexico is not a safe place for thousands of migrants and refugees that flee the violence of Central America,” the Doctors Without Borders said in a press release on Wednesday.

When Gusman fled she had to abandon her business selling merchandise such as perfumes in Honduras and is not allowed to work while she waits for her application. Still, she says she had no choice and dreams that she will win her case and start a business here. She also hopes to find a doctor in Mexico who can help her walk again. Despite the bullet wound she is not completely paralyzed and still has some feeling in lower body.

“I don’t want to be like this forever,” she said, making an effort to move her leg. “I have faith in God that things will turn out fine in the end.” 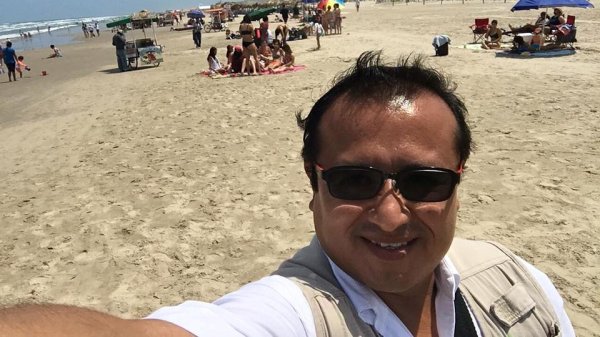 A Reporter Has Been Beaten to Death in Mexico
Next Up: Editor's Pick