Algeria is resorting to a drastic measure in an effort to rein in rampant cheating on national exams: it is shutting off internet access across the country during certain times this week.

Both mobile and wired internet connections will go dark for an hour after the beginning of national high school graduation exams, the BBC reports. The outages will continue throughout the exam season, which began Wednesday and lasts until June 25.

Facebook will also be blocked throughout Algeria for the entire duration of the exam period, Education Minister Nouria Benghabrit told Annahar newspaper, according to the BBC. Benghabrit added that, while the measure was not optimal, “We should not passively stand in front of such a possible leak”.

Surveillance cameras and devices to jam mobile phones have also been installed at printing presses that publish the exam, Benghabrit said, in an effort to keep the test under wraps until it hits students’ desks.

Over 700,000 Algerian students will sit for their high school diploma exams over the next week, with results expected the following month. The clampdown this year follows reports of widespread cheating in 2016, when test questions were published online, forcing more than half a million students to retake the exam a week later. Subsequent efforts to restrict social media access through internet service providers proved insufficient, according to the BBC.

Algeria isn’t the only country to turn off the digital taps in an effort to curb cheating. Ethiopia undertook a similar measure last year after activists published the university entrance exam online in 2016, according to the Guardian, while Iraq shut off internet access for a few hours in 2015 and 2016 to coincide with sixth-grade national exams.

Uzbekistan also blocked mobile internet and SMS services in 2016 during university entrance exams. “We have run out of mini-phones, use your head to take your exam,” said ads posted in an electronics market in the Uzbek capital Tashkent at the time, according to Radio Free Europe/Radio Liberty.

Most Popular on TIME
1
Was Martin Luther King Jr. a Republican or a Democrat?
2
The History of MLK Jr. and Sen. Warnock's Church
3
How mRNA Tech Gave Us the 1st COVID-19 Vaccines 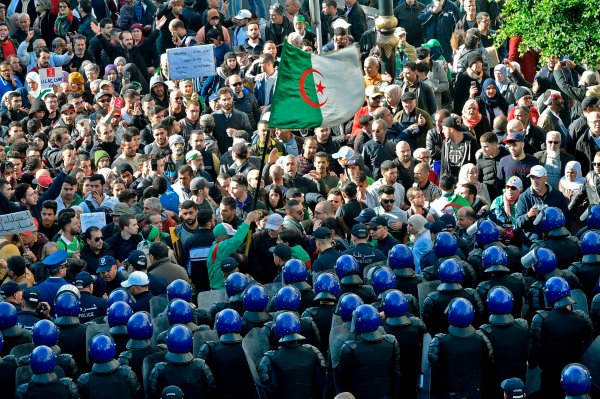 Why Protesters Are Boycotting Algeria's Elections
Next Up: Editor's Pick