‘He Could Have Killed Me.’ Lorena Bobbitt on Domestic Abuse and What She Wants You To Know About Her Case 25 Years Later

Lorena Bobbitt is questioned by an attorney during her trial on Jan. 10, 1994, where she is charged with 'malicious wounding' after cutting off her husband's penis following an alleged rape.
Jeffrey Markowitz/Sygma—Getty Images
By Olivia B. Waxman

When Lorena Bobbitt’s name entered public consciousness 25 years ago, it was in the context of one of the most sensational cases of modern domestic violence ever to make headlines.

Bobbitt would allege that on the night of June 23, 1993, her husband John Wayne Bobbitt raped her and, in a part of the case that neither denied, after he came to bed, she cut off his penis with a kitchen knife. She drove away and threw it out her car window near their home in the Manassas, Va., area. (It was later retrieved and surgically reattached.) Four months later, a jury found John Wayne Bobbitt not guilty of raping Lorena, and a few months later she was acquitted too on a charge of “malicious wounding.”

After Lorena spent 45 days in a mental hospital, her name long remained a byword — not only for titillation but also for a certain kind of tragedy. Her husband had been found not guilty and maintains that he did not abuse her, contrary to her claims, but she had already won some sympathy from the jury and the nation, thanks in part to “changing sexual politics,” as TIME put it back then.

After all, this was not long after Anita Hill testified at Clarence Thomas’ Supreme Court confirmation hearings, alleging that he had sexually harassed her, and helped turn 1992 into “The Year of the Woman.” As one law professor told the magazine at the time, if the case had happened 50 years ago, she would have been convicted “without a shadow of a doubt” because the jury “would not have listened to any argument that her deed was justified by a history of abuse.” In 1993, however, the context of domestic violence and the phenomenon of spousal rape was much better understood.

Lorena Bobbitt’s case drew concern from an anti-domestic violence perspective, even as advocates struggled to reconcile that cause with her specific actions. A controversial TIME essay by Barbara Ehrenreich posited that the moment exposed a class divide between privileged feminist intellectuals and the women who go home to abusive husbands for whom “the feminist revolution just hasn’t come along fast enough.” For the latter group, Ehrenreich wrote, it was understandable to feel a “ripple of glee” hearing about the Bobbitts.

Twenty-five years later, that revolution continues, and the #MeToo and #TimesUp movements have brought new attention to violence between men and women. And the woman who was once known as Lorena Bobbitt — she now goes by Lorena Gallo — believes “it’s a much safer and more equal environment” today. At 49, she still lives in Virginia, with a partner of 20 years and her middle school-aged daughter, and volunteers at shelters for victims of domestic violence.

She talked to TIME about how she views her case from the distance of 25 years.

You now run the Lorena Gallo Foundation, which focuses on domestic abuse issues. What kind of work do you do?

One of my missions is to educate the public and young women about the red flags in dating an abuser. I go to colleges and talk to sororities. I recently went to Tennessee to do a symposium at a law school; the law needs to be tightened a lot more to protect women, to protect the victim. There need to be more convictions for abusers. We have to have a background check on who can own guns. There are still a lot of loopholes that need to be closed. I don’t want to see another 25 years pass by and not be able to protect women more.

I volunteer in local shelters for victims of domestic violence in northern Virginia. I’m a facilitator. I’m not a doctor, I’m not a psychologist — but we teach them to set boundaries, so eventually they end up figuring out the answer themselves.

How does what you experienced 25 years ago shape your decision to do this work?

I thought I was the only one suffering from domestic violence because I was younger and an immigrant from Venezuela. But [when] I read the letters sent to my attorney from all around the world, [I thought], wow, this was amazing. I wasn’t alone. I said, you know what? I want to help the victims of domestic violence. I never stopped helping. The women at the shelters want to hear from me, too. Obviously they know who I am. I mean, let’s get real. They recognize my name.

How do you think the way we talk about domestic violence has changed since then?

Now we can talk a lot more, but there’s still a stigma. It’s not something where you go and get together with your friends and say, oh by the way, I got beat up last night. You know there’s still a taboo. Advocates have done so much for domestic violence but there’s so much more that we can still do to protect women.

More shelters have been created. The resources now — with a click of a button, it’s amazing what you can find. Before we didn’t have that in our hands, on our cell phones, [the ability] to call a national hotline against domestic violence that can actually advise you. Even when I was calling 911, 25 years ago, they didn’t know how to help me. They didn’t have the training to advise a victim. Now that the talk has increased, people understand domestic violence a lot more and how to help others. It’s a social epidemic.

How does the #MeToo movement affect the way we talk about violence between men and women?

I [get] a lot of questions about that actually, people saying, “You were the one that started everything.” And I say, “Oh I’m very humbled, but I didn’t mean to start anything like that.” It was an accident. A lot of the advocacy started with my trial. Legislators started to change laws to protect women, started to take domestic violence more seriously.

I never planned to do such a thing to my husband. He was actually a victim of domestic violence, if you take a look at it, but I had a history of domestic violence, so that drove me to do what I did to him. And basically, when the whole thing exploded on TV and in the media, feminists stepped up and said we can’t let this happen. And that’s exactly what a movement is. It takes years to change. It takes many years.

What did you think of how your case was reported on by the media?

What do you want people to know about your case?

The new generation, they don’t know that I was abused. They don’t realize. When I went to this symposium, this young woman said, “Oh, I had no idea.”

It’s not like I woke up in the morning and said, “By the way, I’m going to cut my husband’s penis off.” There was a history. It was not my intention to do that. I felt terrible that he went through his whole thing. When I was being checked for rape at the hospital, the nurse said, “After we finish the rape kit, you need to talk to this detective.” The detective came and said, “We need to know where the penis is.” A person who is bad or vindictive would never tell them or be concerned about [where] his organ was. And I said, “Look at this road.” Then [they] found it. To me, I think a person with bad intentions would have said, “Forget about it, I don’t know.” I was really concerned about him.

You mention that “the new generation” just knows you from the sensational headlines. When you hear that kind of response from younger women, how does it make you feel? Do you regret it?

I’m glad you asked that question. To me, how could you regret something that you don’t have control of? People regret things like choosing a restaurant, “I’d rather eat Chinese instead of Italian.” That’s a regret. My best answer to that question would be, I was abused. He could have killed me. He choked me many times, and I felt like I couldn’t breathe. I didn’t have the capability, mentally, to choose right from wrong. [So] there’s no such thing as regret.

Do you still talk to your ex?

I don’t talk to him.

Is there anything else that comes to mind when you look back at your case 25 years later?

I’m glad that there’s #MeToo, and that women have stronger voices. I applaud that. I’m part of it. I feel very strongly that this is the beginning of a bigger wave that is going to last for future generations. We never know why we’re here on this earth. [Domestic violence] could happen to anyone. Unfortunately it happened to me, and I have to accept it. I got to the point where I [was able to] integrate back into the community. I have a family. I’m very blessed to have friends and family who are very supportive. 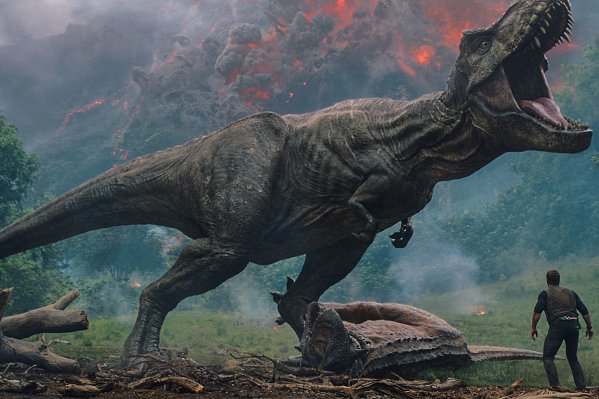 The Real Scientific History Behind the 'Jurassic Park' Dinosaurs
Next Up: Editor's Pick