4 Things to Watch in Turkey's Elections

A pedestrian lights a cigarette as he walks past in banners with portraits of Turrkish President Recep Tayyip Erdogan (L) and the leader of Nationalist Movement Party (MHP) Devlet Bahceli in Istanbul on June 19, 2018.
Aris Messinis—AFP/Getty Images
Ideas
By Soner Cagaptay
Cagaptay is a senior fellow at The Washington Institute for Near East Policy and author of The New Sultan: Erdogan and the Crisis of Modern Turkey.

This Sunday, June 24, Turkey’s citizens will cast two ballots, one for the presidency and other for the parliament. Opinion polls suggest a tight race for what is a historic election for both Turkey and its president, Recep Tayyip Erdogan.

In April 2017, Erdogan won—with a narrow 2 percent margin— a referendum to change Turkey’s constitution. This ushered in an executive-style presidential system, with Erdogan at the helm. Now, in the snap elections he called for June 24, he is hoping to win and assume the powers set out in that referendum.

If Erdogan wins the elections, he will not just be the head of his ruling Justice and Development Party (AKP) and head of state. The executive presidency will also make him the head of government (currently nominally held by Prime Minister Binali Yıldırım), as well as cementing his rule over the military and the police, which is a national force in Turkey. Erdogan already appoints a majority of the judges to the high courts, and if he scores a double victory in the two polls this Sunday, both the parliament and the executive branch will fall into his hands.

In other words, if he wins on Sunday, Erdogan will become Turkey’s most powerful leader since Mustafa Kemal Atatürk established the country in 1923.

Here are four things to remember ahead of Sunday’s vote:

1. The race will be unfair

The government is also censoring online content, with pro-Erdogan businesses now controlling around 90 percent of all media in the country. Coverage is unilaterally stacked in Erdogan’s favor. For instance, Turkey’s publicly-funded TRT network gave Erdogan 31 hours and 25 minutes of airtime between May 1 and May 25. The candidate for the main opposition Republican People’s Party (CHP), Muharrem Ince, got only 3 hours and 38 minutes, the IYI (Good) Party leader Meral Aksener 9 minutes, and the jailed pro-Kurdish Peoples Democracy Party’s (HDP) candidate Selahattin Demirtas received 0 minutes.

During his time as prime minister of Turkey from 2003-2014, and as president since, Erdogan has become increasingly conservative and populist. He has demonized and cracked down on various constituencies and minorities, ranging from Kurdish nationalists and social democrats to leftists and liberals, which are not likely to vote for him. This has helped Erdogan boost his right-wing, Islamist, and nationalist base.

Coupled with strong economic growth, Erdogan’s electoral strategy has managed to deeply entrench polarization in Turkey. His conservative supporters, constituting about half of the country, have zealously rallied around him in his defense; the other half of the country, brutalized by Erdogan, profoundly resents him.

In an unfair race, Erdogan may indeed win the presidential elections on Sunday, or in the run-off to be held on July 8 between the top two candidates if no candidate acquires over 50 percent of the vote this Sunday. Erdogan will become even more authoritarian in the aftermath of the elections, knowing that many of his citizens no longer support him. His populist brand of politics will continue to divide Turkey.

Erdogan has won 12 electoral victories nation-wide, in part because he was blessed with a divided opposition. The anti-Erdogan camp used to be composed of disparate groups, including Turkish and Kurdish nationalists, seculars and even some Islamists. Erdogan’s luck was that the gap between those opposition factions was often wider than the gap separating them from Erdogan. That is until now.

This has changed because of a rare electoral mistake by Erdogan. Turkey has a high 10 percent electoral threshold, which means that parties that do not receive over 10 percent of the national vote tally cannot win seats in the parliament. In the run up to the June 24 polls, Erdogan invented the “electoral pact” idea to help his ally and fledgling Nationalist Action Party (MHP), currently polling around five percent, to cross the 10 percent threshold.

Enter the law of unintended consequences: opposition parties have realized that they, too, can take advantage of the “electoral block” to synergize their support. Subsequently, they have formed an anti-Erdogan block, composed of four unlikely bedfellows, namely leftist-secularist CHP, centrist-Turkish nationalist IYI, center-right Democrat Party (DP), and Islamist Felicity Party (SP). After the election, Erdogan may try to divide the opposition as he has done in the past. However, the nature of the opposition coalition suggests that the fault line of Turkish politics no longer runs through the traditional right vs. left or conservative vs. secular divides, but rather that being pro-or anti-Erdogan trumps all now. It will be tough for Erdogan to undo his biggest electoral mistake to date.

4. The Kurdish nationalist vote will be kingmaker

The opposition block has excluded Kurdish nationalist HDP in order to avoid alienating the Turkish nationalist CHP and IYI voters. As a result, the HDP is running on its own. Currently, support for the HDP is hovering around Turkey’s ten percent threshold. If the HDP had enough support to cross the threshold, the opposition parties together would deny the AKP legislative majority and would even force Erdogan into a run-off in the presidential race. In both cases, the bloom would be off the rose for Erdogan. 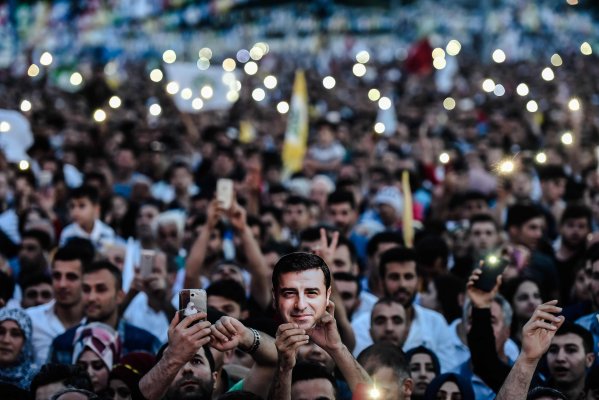 A Jailed Kurdish Kingmaker Could Decide Turkey's Future
Next Up: Editor's Pick