The Story Behind TIME's Trump 'Welcome to America' Cover

John Moore, a Pulitzer Prize-winning photographer for Getty Images, has been photographing immigrants crossing the U.S.-Mexico border for years. This week one of his pictures became the most visible symbol of the immigration debate in America.

“This one was tough for me. As soon as it was over, they were put into a van. I had to stop and take deep breaths,” Moore told TIME Tuesday, describing his reaction to the scene of a two-year-old Honduran girl crying as her mother was being detained in McAllen, Texas. “All I wanted to do was pick her up. But I couldn’t.”

Due to the power of the image, which appeared as critics from across the political spectrum attacked President Trump’s now-reversed policy of separating children from parents who are being detained for illegally entering the United States, TIME’s editors selected Moore’s photograph to create a photo illustration, including Trump, to make the July 2, 2018, cover of the magazine.

To see more of Moore’s pictures from the border, click here. 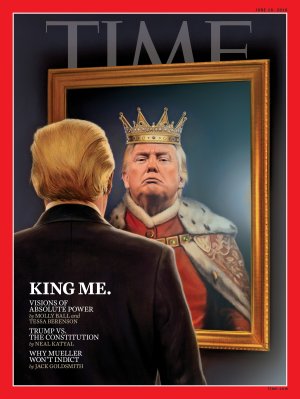 The Story Behind TIME's Trump 'King Me' Cover
Next Up: Editor's Pick