President Donald Trump suddenly reversed himself on Wednesday, telling reporters that he would end the politically toxic practice of separating adults from children at the U.S.-Mexico border.

“I’ll be signing something in a little while that’s going to do that,” the President told reporters. “I’ll be doing something that’s somewhat preemptive and ultimately will be matched by legislation, I’m sure.”

Congress isn’t so sure.

In fact, many lawmakers — including many in his own Republican Party — were imploring the President to end his Administration’s policy for children and adult migrants arriving at the border. Yet, according to aides in both the House and the Senate, there was zero consensus on what a legislative fix might look like or whether the two chambers could agree on it.

The surprise announcement from the President came amid a flurry of activity in the West Wing. White House advisers and the Secretary of Homeland Security, Kirstjen Nielsen, both asked the President to revisit his decision on migrant policy. She arrived at the White House on Wednesday with a two-fold ask: retreat from his demands that reversing the policy be paired with other demands on immigration, or allow children to remain with their parents in detention facilities. Her critics noted that it’s not clear if law enforcement could handle this load or if such a move would pass muster with the courts.

Meanwhile, at the other end of Pennsylvania Avenue, House Speaker Paul Ryan had just announced a Thursday vote on a pair of immigration bills. At least one of those bills is expected to fail, and the other one is 50-50 at best.

Ryan allies could only marvel that, yet again, the President had demanded action, the Speaker moved to give him his ask, and then the President cut him off at the knees. “Do you now get why Paul is leaving at the end of this term?” one longtime Ryan ally said after Trump kneecapped his fellow Republican.

Even so, the House versions still have zero chance of even making their way to the Senate floor.

The President had insisted he had no interest in ending this policy without Congress giving into his larger demands. On Tuesday night, he went to the Capitol and urged House lawmakers to vote for either broad immigration bill — some lawmakers were not sure which one he actually favored — to end a practice he acknowledged is politically unpopular. (Polls show voters disapprove by a 2-to-1 margin.)

But those House bills are the exact opposite of what the Senate wants. In fact, the Senate seems willing only to consider a very limited remedy that deals just with the family question. The broader questions about border walls and lower immigration numbers can wait, Senate aides say. Facing Trump’s demands, however, Sens. John Cornyn and Ted Cruz are working on a wider bill that would give Trump a sense of victory and a down payment on future legislation.

Now, though, it seems as if Trump and his team are backing away from the earlier demands, sending everything into a tailspin. Returning to the policy in place under Barack Obama is a non-starter, officials said, and a modified approach may be the best option.

Yet even with Trump’s latest moves, the debate over these children is unlikely to end here. For instance, courts have ruled against putting kids in detention centers with their parents, and such a move will almost immediately face a challenge in court.

That, according to one Senate aide, might be the President’s best off-ramp. It suggests the President tried to end this policy, judges are standing in his way and, as is the case with the travel ban, leaving the blame with the judicial branch.

None of this is surprising to Republicans, given there has been no telling what the President actually will do during this administration or if he cares if what is on the table directly contradicts his assertions for the last week. In fact, just Monday, Nielsen told reporters at the White House that the only way out of this dilemma is for Congress to pass a law. Now, she appears to have guided the President to what he rejected with fury on Monday.

Republicans, who face strong electoral headwinds this fall, may have found an opening, although Senate Republican aides cautioned that it may be temporary. After all, the President is heading to a campaign rally on Wednesday night, and Trump tends to take his policy cues from his most ardent supporters who crowd into his events — and not from the seasoned political advisers who are urging the President to end this chaos. 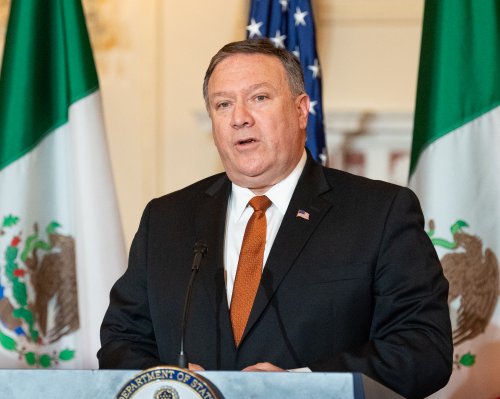 Mike Pompeo Vows U.S. Will Protect 'the Most Vulnerable Refugees' Amid Trump Administration's Family Separation Controversy
Next Up: Editor's Pick