June 20 is World Refugee Day, and my thirty-third birthday. For the world’s 22 million refugees, their “special day” is an arbitrary holiday, but so is my birthday. Somalis don’t generally keep track of birthdays—you are born, you die, and in between is herding animals—although my mother knows she was born on the same day as her favorite camel, Daraanle. I know I was born in Mogadishu in 1985, six years before the start of the terrible civil wars. Seven years before my father disappeared. Eight years before digging the grave for my own baby sister, dead of starvation.

When I escaped Somalia in 2011, I was being recruited by the radical Islamist group al-Shabaab, who wanted to train me to kill infidels and enforce Sharia law. I had no qualifications for this career other than being a young man—by then I was too old to dig graves which was children’s work—but it was the only employment available at the time.

When I won the U.S. Diversity Visa Lottery and got my green card, American officials said I needed a date of birth. So I picked a day in the middle of the year that was easy to remember. I was so lucky to win that lottery, and to choose my own birthday.

But the luckiest people are those who get to be born in free and peaceful countries. And it is definitely luck, since even people who can choose their birthday can’t choose where to be born. To escape the lottery of my birth and a one-way ticket to jihadi martyrdom, I fled to Nairobi, where I lived illegally in a tiny room with my brother. Every day the police would march through our neighborhood, rounding up Somalis and trucking them off to the UN refugee camps in the Kenyan desert. There nearly a quarter million Somalis live in makeshift slums with meager food rations, no work and constant violence from terrorists and gangs. Several generations have been born and raised there.

My brother and I swore we would never go to those camps; we would take our chances on the streets of Nairobi, while studying at a local college and applying for every type of visa we could find. We sold socks on the street to buy food, and risked police roundups and bombs every time we boarded a bus to school.

What kept us going was America.

America was the place I dreamed about—quite literally, every night. I learned English from Arnold Schwarzenegger, himself an American immigrant, watching his movies in a video shack in Mogadishu. Until al-Shabaab blew up that shack and imprisoned its owner, movies like The Terminator were my escape from the real-life bloody chaos of my childhood on the streets.

People with the bad luck to be born in a war zone have always had a chance to become American. We could win the visa lottery, as I did—tougher odds than getting into Harvard—or be accepted as refugees. But when President Donald Trump banned immigrants from seven Muslim countries including my own—a ban expected to be upheld this month by the Supreme Court—the message to millions of people around the world was, your luck has run out.

I understand that every oppressed and starving person in the world cannot move to North America or Europe, nor do they want to; virtually every Somali I know would rather live in a safe and peaceful Somalia than in the wealthy nations of the West.

But they are all inspired by the great free and tolerant nations of the West. It often begins with pop culture—a rap song, a movie, a clothing style—but those are just gateways to deeper appreciation of democracy. After watching every American movie that existed in Mogadishu, I started reading American books. I memorized names of states and dreamed about which ones I would live in. I was proud of every single American president, I did not care about parties or ideologies. On YouTube I watched speeches by Reagan, Clinton, both Bushes and Obama; all made me smile. When George W. Bush invaded Iraq, I was proudly defending America on the streets of Mogadishu when everyone else chanted “Down With America!”

Specifically, he came to my city, Portland, Maine, during the presidential campaign, and falsely accused Maine’s large Somali population of increasing crime. (Crime rates are down in Maine cities where Somalis live.) Then he won, and immediately issued his travel ban. A lawyer told me not to leave the U.S. even though I had legal residency; they might not let me back in. This reminded me of being a fugitive on the streets of Nairobi, where the possession of legal documents meant nothing to corrupt police. Then Trump said he wanted to accept fewer refugees from “shithole countries,” meaning poor black countries like mine. He disparaged the visa lottery as a terrorist pipeline when in reality it is an escape hatch from terrorism.

I felt personally betrayed, but worse was the feeling that Trump had betrayed my dream of America. If this country settled by immigrants could close its doors to the most desperate people in the world, then who would help? Who would set the example of unflinching compassion to other nations? Who would inspire the world’s children of war, like me, to reject violence and strive to raise their own children in peace and security?

An aspiring American with no “real” birthday has no answer to these questions. But on June 20 I will make a wish for the world’s refugees as I blow out the candles on my cake. Because like the rest of us who share this planet, they were born, too.

Iftin lives in Portland, Maine, where he works as an interpreter for Somalis who have immigrated to the state; this fall, he will begin classes at the University of Southern Maine, studying political science. 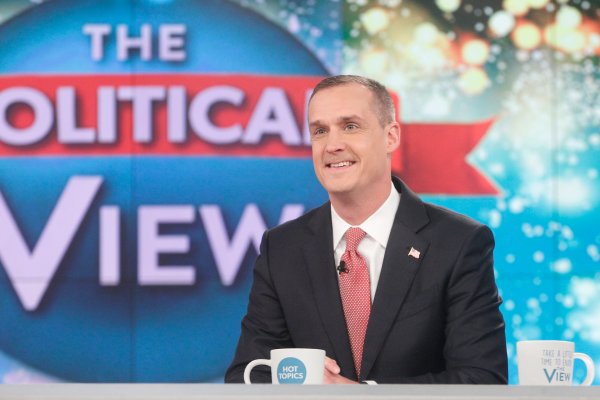 Corey Lewandowski Mocks Migrant Child With Down Syndrome
Next Up: Editor's Pick