Republican lawmakers searching for a compromise to stop the practice of separating parents and children at the U.S.-Mexican border were just thrown for a loop when President Donald Trump demanded $25 billion for a border wall.

That amount, which matches the current estimate for complete funding for the wall, is even greater than the $18 billion Trump previously requested during a failed effort to get wall funding in exchange for protection of undocumented immigrants brought to the U.S. as children, known as Dreamers. And it’s much higher than the $1.6 billion his own budget chief asked for to get the project started earlier this year.

Speaking to small business owners on Tuesday, Trump signaled he was not open to a half-measure that protects families without delivering to Trump the rest of his immigration wish list. “We have one chance to get it right. We might as well get it right or let’s just keep going,” Trump said, signaling he wants an all-or-nothing immigration bill.

The explicit demand comes as Congress is trying to find a deal that is unrelated — at least in theory — to reunite children separated from their parents along the U.S-Mexican border, and it was not well received.

“For someone saying these children aren’t hostages, it’s tough to call them guests,” said a top aide to Senate Republicans who was briefed on the President’s demands. “We’re not going to fund a wall with one check. His own budget didn’t even ask for that. But we’re not going to do it all at once. And he wants to conflate this with the kids. It’s political insanity. It will kill us.”

Republicans in Congress have not been as supportive of the family separation policy as members of the Trump Administration. For many who will appear on the ballot this fall, the “zero tolerance” policy of referring everyone caught crossing the border for criminal prosecution — which necessarily means their children will be kept separately — risks turning off moderates and independents they’ll need to win.

Read More: Why President Trump Is Standing by His Family Separation Policy

Two polls released Monday from CNN and Quinnipiac University backed that up, showing that two-thirds of Americans disagreed with the family separation policy.

In response, lawmakers have been looking for a legislative solution. Every Senate Democrat has signed onto a proposal from California Sen. Dianne Feinstein which would overturn the family separation policy. Texas Sen. Ted Cruz said he will put forward a conservative alternative. Even Rep. Mike Coffman of Colorado, who backed a hardline immigration bill earlier this year, has said he would be open to the Senate Democrats’ bill.

One Democrat couldn’t help but marvel at the bedfellows. “I’m actually looking forward to reading what Senator Cruz sends us,” the Democratic Senator told TIME. “I don’t care whose ink solves this.”

But it remains an open question how Trump will respond. Ahead of a visit by the President to the Capitol this evening, Republican leaders were trying to guide rank-and-file lawmakers away from enflaming Trump’s instincts to retreat to harsh, but familiar, rhetoric against immigration.

“They forget that we have constituents at home. And they’re voting this year. They need to remember that we face voters this fall, not Trump,” said one senior Republican in the House.

A second Republican lawmaker involved in defending the party’s majority this fall said he was frustrated with the lack of guidance coming from the White House.

“When you call the White House, there are no answers about strategy,” he said. “There are these numbers — numbers that sound scary but really aren’t was bad as they sound — and talk about ‘Donald J. Trump said this’ and that and so on and so forth. There’s no explanation about why this is happening and what happens to us this fall. I’m not sure the President realizes that this is hurting the entirety of the Republican Party.” 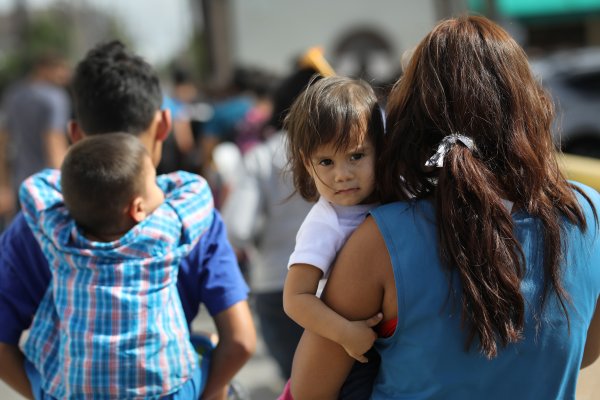