House Democrats Are Unveiling a Bill to Keep Immigrant Families Together

U.S. Rep. Jerrold Nadler (D-NY) (L) speaks as Rep. Sheila Jackson Lee (D-TX) (2nd L) and Rep. David Ciclline (D-RI) (R) listen during a news conference to denounce a meeting between the Justice Department and FBI officials and Rep. Devin Nunes (R-CA) and Rep. Trey Gowdy (R-SC) May 24, 2018 on Capitol Hill in Washington, DC. The White House is arranging two separate meetings, one for House Republicans only and one for bipartisan House and Senate leaders known as the Gang of Eight, to review classified information related to the Russia investigation including the informant the FBI had sent to talk to Trump Campaign advisers
Alex Wong—Getty Images
By Alana Abramson

A New York Congressman will unveil legislation tomorrow that would prohibit the Department of Homeland Security from separating families at the border and delay the prosecution process for immigrants seeking asylum.

Rep. Jerrold Nadler, the ranking Democrat on the House Judiciary Committee, is introducing the Keep Families Together Act on Tuesday, the lower chamber’s companion to a bill Democratic Sen. Dianne Feinstein introduced in the Senate, which has garnered universal support from the Democrats in that chamber.

Like the version in the Senate, the bill calls for prohibiting Department of Homeland Security Officials from separating children from their parents, unless parental rights have been terminated or authorities have determined that being with the parent keeps the child in danger; requires border patrol officials to undergo annual child welfare training; and mandates that DHS develop procedures to reunite parents with their children.

But it goes further than the Senate bill by explicitly calling for a delay in prosecution for immigrants seeking asylum. The primary reason for the majority of these separations is “zero tolerance” policy Attorney General Jeff Sessions implemented last month. Under this rule, all border crossings are referred for criminal prosecution, which has resulted in the parents who are apprehended being forcibly separated from their children while they enter the legal process. By calling for a restriction on these prosecutions, Nadler and the House Democrats are hoping to circumspect this entire dynamic.

“What the bill says in effect is that if someone allegedly enters the country illegally, and claims asylum, the prosecution and therefore the arrest for the misdemeanor of the illegal entry cannot be pursued while the political asylum claim is being pursued,” Nadler said in an interview with TIME Monday. “It’s the prosecution that triggers separation because the prosecution triggers your arrest which triggers your separation. We’re saying you can’t arrest the person until you have a negative finding on the claim for asylum.”

Nadler had been working on the legislation for at least two weeks. But he is introducing it just two days after he orchestrated a father’s day visit with six of his colleagues to an immigrant detention center in Elizabeth, New Jersey, where they spent nearly an hour meeting with individuals who had been separated from their children.

While the outrage about the separation of these families has reached a fever pitch in the country, it is virtually impossible, however, that this version of the bill becomes law. Nadler’s bill had garnered 100 co-sponsors from Democratic lawmakers as of Monday afternoon – over half the House’s caucus, including House Minority leader Nancy Pelosi.

But it would need another 118 votes, which would mean Republican support, to even advance to the Senate, where its chances would be even slimmer of passing. Although all Democrats have signed on to Feinstein’s legislation, this bill has stronger language, and would need 11 votes from Republican senators.

If it were to pass the Senate, President Trump would need to sign it into law, and its unlikely, based on his past statements, that he would be amenable to any form of an immigration bill if it did not also include other measures like border security funding. 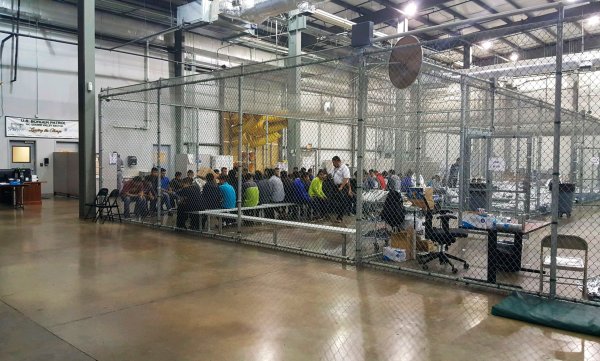