When he was released from jail on Jan. 11, 2006, Cambodian activist Yeng Virak refused to thank Prime Minister Hun Sen for his freedom. He had just spent 11 days behind bars after being accused of defaming the government at an event celebrating human rights, and in his view he shouldn’t have been locked up in the first place.

“I was not a criminal,” he tells TIME at a cafe in the capital Phnom Penh, slapping a shaky table for emphasis. “There’s no reason to arrest me, so why say ‘thank you’ for that?” Startled, nearby students sipping sweet blended iced coffees looked up from their homework and smart phones. None of them have ever known a leader besides Hun Sen, the world’s longest-ruling Prime Minister, who is looking to extend his 33-year grip on the country through an upcoming election broadly panned as a farce.

Hun Sen and his ruling Cambodian People’s Party, CPP, left little to chance in the lead-up to the July 29 vote, intimidating dissidents and disarming his challengers. The main opposition party, the Cambodia National Rescue Party, or CNRP, was disbanded last year, its president Kem Sokha jailed on treason charges and senior officers barred from politics. Independent newspapers and radio stations have been forced to shut down or compromise their independence in a brazen crackdown on the press.

The U.S. and the EU have withdrawn financial support the polls — which they have provided for previous elections — over concern that the vote will not be credible. Cambodia, observers say, is slipping steadily toward authoritarianism a quarter of a century after the U.N. brokered an end to the country’s civil war and administered its first elections since the fall of the Khmer Rouge. The election will be “the most unfree and unfair” since modern Cambodia was established in 1993, according to Sophal Ear, an associate professor at Occidental College in California. “Any election without the CNRP is meaningless,” he tells TIME.

While the West has voiced near-unanimous disapproval of the ruling party’s actions leading up to the poll, Hun Sen still has the backing of a few foreign governments; most notably China, hardly a global role model in terms of the democratic process. Japan, a longtime donor to the country, has also agreed to some material support for the polls, while Russia, Singapore and Myanmar have offered to send observers.

Hun Sen, Prime Minister and leader of the Cambodian People's Party and his wife Bun Rany during a general election campaign in Phnom Penh on July 7, 2018.
Tang Chhin Sothy—AFP/Getty Images

Virak, 58, seems like an unlikely candidate to lead a political movement, but he has taken up the challenge. As a teenager, he survived the Khmer Rouge, separated from his family and toiling in a labor camp, while some 20% of Cambodia’s population was exterminated. Some decades later, the democracy activist and educator has found himself president of the Grassroots Democracy Party, one of Hun Sen’s many underdog challengers, taking up the mantle of the party’s popular co-founder, political commentator Kem Ley, after he was assassinated at a café in broad daylight in 2015.

Despite the clear obstacles to success, the Grassroots Democracy Party, or GDP, will be among the 20 parties on the ballot later this month. The exiled main opposition CNRP has been dismissive of what many Cambodians call “firefly parties,” flickering in and out of existence around election season. While some, like the GDP, have presented themselves as small but authentic challengers to the ruling party, others are viewed as CPP-backed proxies serving to legitimize the vote and lend the appearance of a multi-party competition.

“The number participating, whether it’s 20 or 200, is meaningless,” Sam Rainsy, the CNRP’s exiled former president, told the Phnom Penh Post in May. “Their only role is to help Hun Sen’s CPP in its desperate attempt to secure legitimacy.”

Many of the parties on the ballot will be totally unknown to voters: more than a third have been founded since January, and 17 have never served in Cambodia’s National Assembly. The five old enough to have competed the last time Cambodia went to the polls in 2013 earned a combined 3.06% of the vote, and not a single seat. In 2013, by contrast, the CNRP won 44% of the vote, its best ever showing, despite allegations against the CPP of voter fraud and ballot stuffing. After the opposition topped 40% again in local elections last year, the 2018 poll seemed poised to deliver a tight race, perhaps even a first-ever democratic transfer of power.

That seems all but impossible now. What remains of the CNRP, now rebranded in exile as the Cambodia National Rescue Movement, have called for voters to boycott the poll. But few parties are heeding that call. Some, like the Cambodian Youth Party, are brazen CPP proxies. Government officials have floated various strategies to inflate voter turnout, from distributing cash gifts and automatically registering voters as ruling party members, to declaring voting compulsory and threatening boycotters as “traitors.”

Whether it’s because boycotting the vote would put him at risk of imprisonment, or because he still believes democracy stands a fighting chance in his country, Virak isn’t ready to completely dismiss the polls. He says he believes the only way to bring change to Cambodia is to participate, engage the populace and try to beat the odds, stacked as high as they are against him.

“At any polling office in the territory of Cambodia, whether it’s the middle of the city or the top of the mountain where only elephants can reach, our logo is there,” Virak says. His party plans to contest hundreds of candidates across all 25 of the country’s provinces. “There is an alternative,” he says, “if people choose to vote for change, they can.” 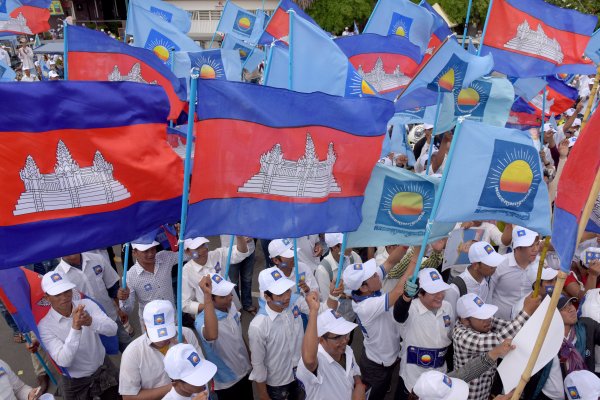