A Cambodian prince and former prime minister is in critical condition and his wife dead after a head-on collision on a coastal highway Sunday, according to police.

Prince Norodom Ranariddh and his wife Ouk Phalla were both rushed to the hospital after an oncoming Toyota Highlander slammed into their BMW while trying to pass traffic.

Phalla, 39, died in the hospital shortly after the crash, according to officials. Ranariddh, the 74-year-old leader of the Funcinpec political party, was transported to a hospital in Phnom Penh with serious injuries. All five people in the Highlander also suffered injuries, according to the police report.

Photos posted to the National Police website show two totaled SUVs and bodies on a bloodied stretch of road.

Chuon Narin, chief of police in Sihanouk province, told Reuters that Ranariddh “is seriously injured but he will be fine.” He said both vehicles were speeding at the time of the accident.

A news agency close to the government reported Monday that Ranariddh was medically evacuated to Thailand overnight. The hospital in Phnom Penh where Ranariddh was treated declined to comment on the prince’s medical condition.

Ranariddh and Phalla were en route to visit supporters in the seaside town of Sihanoukville during a campaign tour ahead of the country’s upcoming general election. Phalla was also running as a candidate.

Funcinpec is set to contest the July 29 polls despite widespread concerns of a rigged vote. The country’s main opposition party, the Cambodian National Rescue Party (CNRP), was disbanded last year and its leaders charged with allegedly plotting to overthrow the government with the help of the U.S.

Prime Minister Hun Sen has staunchly insisted on his poll’s credibility and has clamped down on dissent and vote boycott efforts in a bid to extend his 33-year rule.

Ranariddh, half-brother of Cambodia’s King Norodom Sihamoni, was co-prime minister of Cambodia after his party won U.N.-conducted polls in 1993. After an uneasy power-sharing agreement with Hun Sen’s Cambodian People’s Party, Ranariddh was forcibly ousted in 1997 and fled the country.

Last year, Ranariddh returned to parliament, taking one of the seats redistributed after the dissolution of the CNRP. 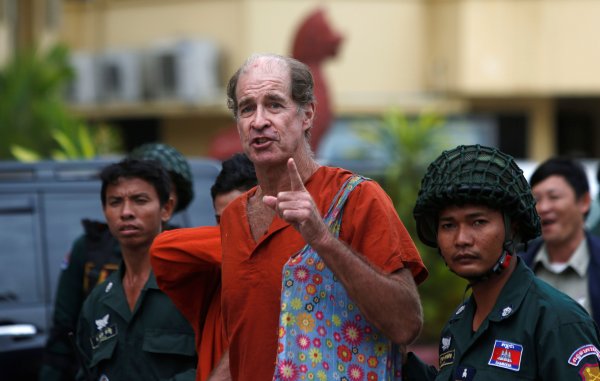 Cambodia Puts Australian Filmmaker on Trial for Espionage
Next Up: Editor's Pick