The Real Scientific History Behind the Jurassic Park Dinosaurs

The Jurassic Park franchise — including Jurassic World: Fallen Kingdom, in theaters Friday, almost exactly 25 years after the first movie came out in 1993 — is obviously entirely fictional, so you don’t have to worry that the dinos are coming to get you. But that doesn’t mean there’s not something real at its heart: the story was in fact inspired by important changes in the scientific world.

And, over the course of the franchise, though they might not get everything right, the filmmakers have incorporated some expert advice on how to make the dinosaurs in the movie the most realistic depictions possible.

Here’s a look at how the real evolution of dinosaurs influenced the dinosaurs onscreen:

How Scientific Discoveries Inspired the Franchise

When Michael Crichton wrote the 1990 sci-fi novel that inspired the first Jurassic Park movie in 1993, he was inspired by paleontologist Jack Horner’s 1988 book Digging Dinosaurs, on dinosaur behavior and discoveries made in the prior decades. “He bases the character of Alan Grant on a guy digging up baby dinosaurs in Montana at a place called Egg Hill and [my site] was called Egg Mountain,” Horner tells TIME.

A “dinosaur renaissance” had kicked off in the ’60s and ’70s, according to paleontologists. That didn’t mean there wasn’t interest in dinosaurs before the 1960s. In fact, as Daniel Barta, a paleontologist at the American Museum of Natural History, explains, there was a great deal of interest in paleontology in the Victoria era and the decades that followed, especially after scientists first recognized dinosaurs as a specific group. But interest in dinosaurs dried up during World War II, as did funding to study them, while the world focused on the war and scientists were drafted. When they returned their studies in the post-war years, they ended up breaking new ground — literally.

“Back in the ’60s, there were still large parts of the West where nobody thought to look for dinosaurs or that they hadn’t explored in a long time,” says Barta. “There were excavations in Wyoming and Montana, where people were uncovering these huge dinosaurs and that was the beginning of the public’s love affair with dinosaurs.”

Paleontologist John Ostrom’s discovery of Deinonychus, a close relative of the better-known Velociraptor, in August of 1964, sparked particular interest. He argued dinosaurs didn’t drag their tails on the ground like people thought they did, and also popularized the idea that dinosaurs were more like warm-blooded birds than cold-blooded reptiles. There was still limited evidence for his argument, but Horner’s research in the late ’70s helped validate Ostrom’s findings when his team uncovered the remains of baby dinosaur nesting grounds in Montana. They found evidence that suggested that dinosaur parents were bringing food for the babies, and that dinosaurs traveled in herds. Horner wrote about these findings and others in Digging Dinosaurs.

Before these discoveries, “dinosaurs were seen as evolutionary failures, sluggish and corpulent reptiles — and also as a group that no self-respecting scientist wanted to spend much time studying,” Matthew T. Carrano, Curator of Dinosauria at the Smithsonian, told TIME in an email. “But largely thanks to the careful research and discoveries of scientists like John Ostrom, two things became clear. First, dinosaurs were in fact lively, active animals that were more like birds and mammals than lizards or snakes. Second, birds were the direct living descendants of dinosaurs. These twin realizations utterly changed our perception of dinosaurs both scientifically and culturally — and I think Jurassic Park is a tangible reflection of that.”

What Jurassic Park Gets Right About Dinosaurs

Carrano gave Jurassic Park high marks for the basics of the dinosaurs that show up in the franchise. “The franchise gets one very important thing right: dinosaurs were once active, living things that were as successful on land as any animals before or since,” he added.

Proof that the franchise has earned the respect of paleontologists is the fact that the Society of Vertebrate Paleontology has recognized Steven Spielberg — who directed the first two films and has been executive producer on the others — for his contributions to the field. After all, he helped dinosaurs become perhaps more popular than they’ve ever been.

Carrano noted that as a kid who grew up wanting to be a paleontologist in the ’70s, he struggled to find new books to read. “Now, it’s impossible to keep up with the books published each year. Scientifically, dinosaurs went from being a weekday-night show at an off-off-Broadway theater, to a sold-out long-running juggernaut with a movie deal. It’s night and day… Errors are mostly forgivable, because the movie succeeds at making dinosaurs exciting, interesting, and something to root for.”

“[The year the first Jurassic Park came out] is the first time we actually see dinosaurs depicted as smarter, more agile, and faster than people had thought previously,” echoes Horner. “People had thought of dinosaurs as big stupid lizards wandering around looking for a place to go extinct.”

How dinosaur tails appear in the films best illustrates this milestone, as a visible example of the change in perception of dinosaurs. Before the milestone scientific discoveries in the ’60s, skeletons of dinosaurs depicted their tails dragging on the ground because that’s what lizards’ tails are like. Jurassic Park depicted dinosaurs with their tails sticking straight out. “It goes back to the late 1800s when the first dinosaur skeleton was put together, because the teeth looked like those of an iguana. They decided the tail of a dinosaur should be on the ground, [believing that] dinosaurs were ordinary lizards — just big,” says Horner.

The movie also depicted them as traveling in herds, as birds would travel in flocks, and Barta gives a thumbs up to Jurassic Park III‘s depiction of a paleontology camp.

What Jurassic Park Gets Wrong About Dinosaurs

But, while the franchise has helped spread the word on some truths about dinos, it has also introduced new misconceptions. In particular, one question that paleontologists didn’t often have to field before Jurassic Park is whether dinosaur DNA exists and if dinosaurs can be cloned. “We all know now to anticipate that question,” says Barta. “The oldest DNA that has been recovered from fossil record is well under a million years old, and these non-bird dinosaurs all died out 65 million years ago. Because [DNA] is a fragile molecule, it’s not thought to have survived as far back as the Jurassic period.” (Horner explains that, in 1993, when the first movie was made, scientists didn’t yet know that they wouldn’t be able to find dinosaur DNA, adding that he and a grad student tried.)

The films tend to be off on the sizes of some dinosaurs, and filmmakers have invented new functions for some of their physical attributes.

The Velociraptor is one of the dinosaurs that the movie depicts as larger than it would have been in real life. (Carrano says it should be just about three feet tall.). Ankylosaurus is depicted with a club on its tail for self-defense, but that was probably for wooing the ladies, says Horner, and the Mosasaurus in Jurassic World (2015) is depicted as about the size of a whale when it would have been half that length, according to Barta. The opposite is the case with Dilophosaurus.“The Dilophosaurus would have been larger than it was portrayed in the movie, and overall, is the most inaccurate dinosaur in the movies,” says Barta. “We wouldn’t be able to have fossilized evidence of a poison gland or a bony structure near the throat for the support of anything like a frill. We have no evidence for either of those things in actual fossils.”

Those who find the Tyrannosaurus terrifying will be relieved to hear that it wouldn’t have able to run because it didn’t have large enough muscles, and that the dinosaurs probably sounded less scary too — scientists believe they grunted and hissed but probably didn’t really roar.

In terms of the physical environment, some people might walk away from the movies or other pop depictions of dinosaurs and think that dinosaurs only lived in swamps and jungles, when in fact, the world’s climate when they were really around “still would have been quite seasonal and temperate,” says Barta.

Appearance-wise, the biggest inaccuracy in Jurassic Park‘s dinosaurs is the lack of feathers and colorful plumage, some knowledge about which has been gained in the years since the franchise debuted. Horner says the dinosaurs were as accurate as possible when they were made, but because filmmakers need to preserve continuity, later discoveries wouldn’t have been incorporated in sequels. In later films, he says, “we knew Velociraptor should have feathers and be more colorful, but we couldn’t really change that look because everything goes back to the first movie.”

But, the new film does feature species of dinosaurs that haven’t been in previous films, in an effort to incorporate dinosaurs from new places — like Carnotaurus, a meat-eating dinosaur that roamed South America, and the Baryonyx from England. “We don’t know much about [Carnotaurus],” says Horner. “It’s got tiny little arms even smaller than T-rex, and weird little teeth, so we don’t know what it evolved to eat.”

But the most scientifically mysterious dinosaur in the franchise may still be one of the best-known ones in popular culture: the Brachiosaurus, the first dinosaur that Bryce Dallas Howard and Chris Pratt encounter in awe when they reach Isla Nublar in the new movie.

“We don’t know much about them, but once we really understand a Brachiosaurus or any of the long-necked dinosaurs, we’ll probably know most of the things we need to know about dinosaurs,” says Horner. “They’re probably a key to them all, but they’re just horribly big and horrible to dig up. Every part of them is so gigantic so it takes a long time.” 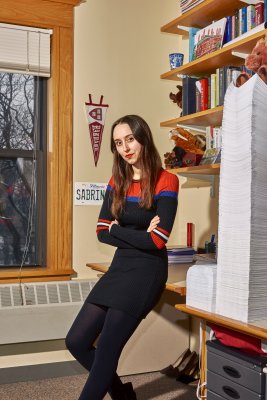 Meet Sabrina Gonzalez Pasterski, a Physics Whiz So Talented That Stephen Hawking Cited Her
Next Up: Editor's Pick