How Hannah Gadsby Channeled Her Own Trauma, Bill Cosby and Monica Lewinsky in the New Netflix Comedy Special Nanette

Hannah Gadsby is done trying to make you laugh.

The Australian comic is questioning the entire concept of comedy in her one-hour special Nanette, which comes to Netflix on June 19 following the success of her current stage show. Throughout much of the special, Gadsby tackles issues like homophobia, the male gaze in art and how society can protect abusers — heavy material she is no longer interested in playing off with a joke. Recounting the violence she experienced as a gay woman growing up in Tasmania, where homosexuality was only legalized in 1997, Gadsby says in the special that joking away such long-lasting damage is another form of suppression.

Instead, Gadsby, who made a name for herself as a stand-up through wry, self-deprecating humor in Australia, wants to push the boundaries of comedy to make it a place where those from marginalized communities can tell their stories openly.

“When I first started it was, ‘If you’re not funny, get out.’ The rush to be funny first and funny last was the pressure,” Gadsby told TIME. “It became boring.”

While she recognizes that her path to success was paved by boundary-pushing comedians like Lenny Bruce and others of his ilk, continuing in that tradition became destructive for Gadsby. She hit a low point about a year before writing Nanette, when she performed a set about Taylor Swift, which she says started as a way to reach a broader audience. Gadsby says she became incensed by what she called Swift’s “air of victim mentality.” (Swift has been accused throughout her career of playing the victim, particularly in public feuds, a point the singer addressed head-on in the song “Look What You Made Me Do.”)

“She’s clearly never been the victim of a hate crime, because you can’t just shake it off,” Gadsby says.

Gadsby quickly realized her bitterness was a sign she had not really ever gotten over her own trauma, she says, and she realized she had to do something constructive to address it — or quit comedy entirely. So, she wrote Nanette, and connected the litany of abuse she’s faced with the overarching culture that perpetuates cycles of abuse, with timely takes on men like Woody Allen, Bill Cosby and Bill Clinton, and the lengths we’ll go to in order to protect their reputations.

Gadsby performed Nanette in Australia and the U.K. in the months before the #MeToo movement kicked off, but the issues of systemic abuse and the way people respond to it had long been on her mind, going back to her education in art history and her confusion over why someone like Pablo Picasso — who had an affair with a 17-year-old and made several misogynistic statements — continues to be heralded as a genius. “What we’re looking at is a cultural situation, as opposed to the behavior of single people,” she says. “There’s something rotten at the heart of it.”

In the special, Gadsby draws on the experiences of other women to highlight where comedians have failed in the past. Had comics in the 1990s attacked Clinton instead of dragging Monica Lewinsky through the mud, we might have changed the way we treat powerful men now, she suggests. Lewinsky, Gadsby told TIME, was deeply influential to the writing of Nanette. “Shame is what defines both of our stories. It’s that resilience in that story of a survivor,” she says. “My story is in invisible one and hers is a really, really public one.”

Despite Gadsby’s anti-comedy stance, Nanette is still quite funny. Gadsby’s droll, clever manner draws laughs with her screeds on the color blue and the way women figure into art history. But it’s in her insistence that comedy can be so much more that makes Gadsby’s material all the more compelling.

“The point remains that I have trouble reconciling the power I have onstage with the lack of power I have out in the world,” she says. “But this is an exciting moment. It’s the first time that people are telling their own stories unfiltered.” 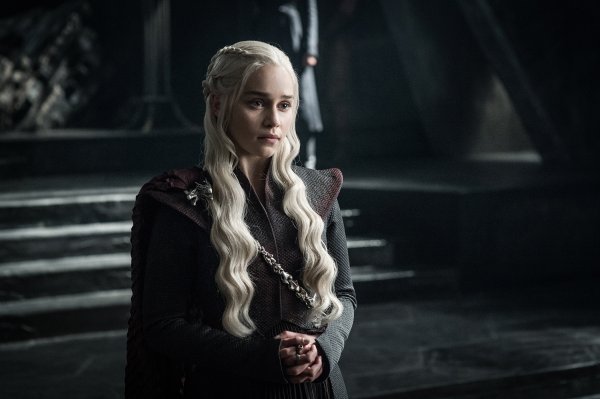 Try Not to Get Emotional About Emilia Clarke's Official Goodbye to Game of Thrones
Next Up: Editor's Pick