WASHINGTON, DC - JUNE 14: Rep Steve Scalise (R-LA) makes a play to first base resulting in an out after fielding a ground ball on the first pitch of the Congressional Baseball Game on June 14, 2018 in Washington, DC. Scalise was shot during a team practice before last years game. This is the 57th annual game between the Republicans and Democrats. (Photo by Alex Edelman/Getty Images)
Alex Edelman—Getty Images
By Abigail Abrams

One year after he was shot in the hip while practicing for the annual Congressional baseball game, House Majority Whip Steve Scalise once again took to the field on Thursday to participate in this year’s game.

“I’m back in the game,” the Congressman tweeted ahead of the evening event.

Scalise was one of six people hurt in the shooting last June. Four people were shot and Scalise suffered life-threatening injuries. He underwent nine surgeries and extensive physical therapy over the past year.

He played second base on Thursday, the position he was at during last year’s practice when the shooting started.

But he wasn’t there just to mark the occasion — Scalise got the first out during Thursday’s game, when Democratic Rep. Raul Ruiz hit a grounder to him on the first pitch. Scalise fielded the ball cleanly and threw it to first, getting Ruiz out. Several of the whip’s teammates then rushed to hug him.

The Congressional baseball game, which was expected to raise around half a million dollars for children’s charities, is one of the few bipartisan traditions in Washington. Many lawmakers were emotional seeing Scalise back on Thursday. But perhaps none more than the Congressman himself, who posted a video about his recovery on Wednesday and told reporters on Thursday morning he was grateful to be playing.

“That fact that I get to start at second is really special,” Scalise said, according to ABC News. “To be able to walk back out on this field, a year later, is an incredible feeling.” 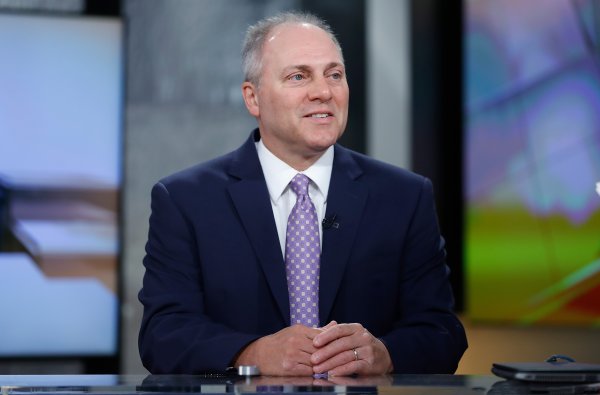 ‘You’re Just Fighting for Your Life.’ Steve Scalise Looks Back at Congressional Baseball Shooting 1 Year Later
Next Up: Editor's Pick