After a marathon debate, Argentina’s Congress approved a bill Thursday to legalize abortion.

The bill passed by a razor-thin margin, with 129 lawmakers voting to legalize elective abortion up to 14 weeks of pregnancy, while 125 voted against and one abstained. The bill, which also includes measures to widen access to sexual health education and contraceptives, will now go to the Argentine Senate. If it is approved there, Argentina—a predominantly Catholic country and the birthplace of Pope Francis—would have one of the most liberal abortion regimes in Latin America.

Abortion is currently almost completely illegal in Argentina, except in cases of rape or when the life or health of the woman is at risk. In the region, only Cuba, Uruguay, Guyana, and one Mexican state allow abortion in cases other than rape, fatal fetal abnormality and threat to the mother’s life. In Argentina’s neighbor Chile, even these exemptions were only introduced in 2017.

President Mauricio Macri opposed legalization, but has pledged to respect parliament’s decision and sign the bill into law if lawmakers approve it.

The pre-vote debate took 19 hours, with several undecided lawmakers waiting till the last minute to state their position and some changing their mind in the hours before the vote at 10 a.m. local time.

Pro-abortion rights campaigners had gathered outside the Congress building in downtown Buenos Aires yesterday and immediately began celebrating when the result was announced, with many expressing their reaction to social media.

“The World Cup starts today but in Argentina we’re celebrating something else,” said one campaigner, posting a video of the moment the result was revealed. 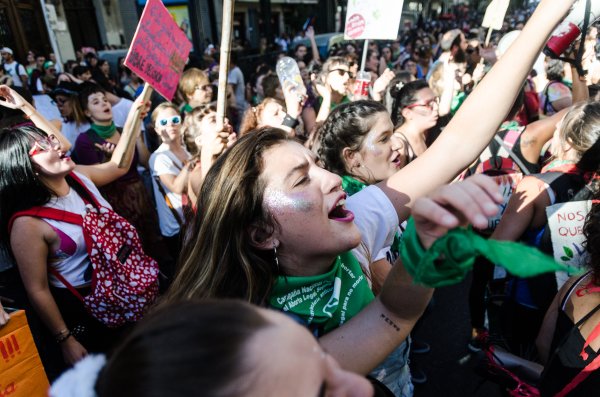 Why Argentina's Abortion Vote Matters
Next Up: Editor's Pick