A Tale of Three Jihadists Puts the Fight Against Extremism Onstage

The sound of machine-gun fire explodes in a darkened room in Paris’ Montparnasse district on a May afternoon. The lights go black for a moment, and when they come back on again, a man lies dead.

The violence brings gasps from the 200 or so teenagers seated in the audience of Le Grand Point Virgule theater, who well remember the night in November 2015 when ISIS gunmen burst into the Bataclan theater just a few miles from here and shot dead 90 people. This time, however, the gunfire is not another deadly attack. It is the latest performance of Jihad, a four-year-old play that predates the devastating attacks in Paris, Brussels and Nice in 2015 and ’16.

Now, schools and governments are increasingly using the play as a teaching tool for a generation of Muslim youth in Europe who have come of age in a time of terrorism, war and mass migration. Many young Muslims are taught to shun others, says the playwright, Ismael Saidi, 41, and to interpret the Quran in a strictly conservative way. “We Muslims have a problem,” he says. “We have to change the way we teach children. We are telling them that if they eat pork, they will go to hell. So how can my kids play with your kids, knowing your kids will burn in hell?”

The play, which tells the story of three young Muslims from Belgium who travel to Syria to fight alongside ISIS and groups affiliated with al-Qaeda, does not aim to preach. Rather, it is at times hilarious, poking fun at the very kinds of terrorists who have wreaked havoc in several cities in Europe, by depicting them as inept fools. One character wonders how he will know what an infidel looks like, given that in the video game Call of Duty, “the enemy, well, looks more like us.”

Jihad has now been translated into six languages, including Arabic and Japanese, and performed in five E.U. countries as well as in Morocco. In addition, Saidi has performed the play in schools across Belgium and France and in nearly 30 prisons. Production will begin on a French-language movie in September. Saidi has since written two more plays on similar themes, forming a trilogy that carries a serious message: that decades of bad government policies and neglect of Europe’s minorities has led to perilous drift and ever more dangerous radicalism. “There is a huge generation gap with the youth, between the system and their own system,” Saidi says.

The terrorist attacks in Paris and Brussels have inspired other Muslims in Europe to grapple with the fallout from the events. The Moroccan-born French writer Rachid Benzine created Letters to Nour, an onstage fraught conversation between a father and daughter, who joined ISIS in Iraq.

For Saidi, the decision to write was personal. Born in Brussels to Muslim Moroccan immigrants, he was jolted into writing Jihad in 2014, after logging on to Facebook one day and spotting a photo of a former high school friend from Brussels posing with a Kalashnikov rifle in a jihadist training camp on the Syrian war front.

The friend was just one of around 5,000 Europeans recruited to fight in Syria and Iraq alongside ISIS and other jihadist groups from 2012 to ’15. Most hopped on the three-hour flight to Istanbul, then traveled over land to the front lines. Of those recruited into battle, about 1,700 came from France, while 470 came from tiny Belgium, the highest proportion of any Western country.

Saidi—a former cop who spent 16 years with the Brussels police force—was stunned to see his friend among them. “I assume he is now dead,” he says over espresso one May morning at a Paris café. “I asked myself, Why would he possibly decide to do such a thing?”

In his work, Saidi has tried to answer that question. Jihad depicts three young men drawn from his experience of growing up in Brussels’ predominantly Muslim neighborhood of Schaerbeek.

The oddball mix of losers head to Syria carrying deep frustrations about their lives. Ben, the instigator, admits to his friends that he turned religious after a rift with his conservative father, who berated him over his passion for Elvis Presley. “Maybe my dad will be proud of me,” he says wistfully as the friends approach the Syrian battlefront. He is soon killed by rocket fire.

His friend Reda tags along to Syria to escape a breakup with his girlfriend, whom his parents have forbidden him to see because she is not Muslim; he too is killed by rocket fire.

Ismael (the part Saidi himself frequently plays) has seen his dream of being an artist squashed by disapproving Islamic teachers. Depressed and adrift, he joins the expedition to the front lines and is the only one of the three to survive.

Back home, Ismael receives a visit from Reda’s ghost, who tells him he finally read the Quran in the afterlife. “I read it for both of us,” he says. “We were lied to. It speaks only of love, not of war, not of blood.”

Jihad is set at a time when E.U. governments made few attempts to stop the jihadist exodus through Turkey. That changed drastically after Europe’s battle-hardened fighters returned to wage terrorism back home. The attacks prompted tough crackdowns by E.U. governments, which have jailed hundreds of the former fighters who returned to Europe. In addition, in France alone, about 26,000 people have been placed on a watch list of those suspected of having radical views, who could pose a terrorist threat.

While heavy surveillance has helped tamp the threat, it is far from extinguished. Just one day after I met Saidi, a Chechen-born resident of Paris whose name was on France’s watch list ran through a street in the center of the city chanting “Allahu akbar” (God is great) and stabbing people with a knife, one of them fatally; the police shot him dead.

After each performance of Jihad, Saidi sits on a stool onstage, debating the play with the audience, which at a recent show in May comprised high school students from Paris’ immigrant neighborhoods. One girl asked Saidi what he thought of so-called communitarianism, a tendency among some ethnic minorities to adhere to strict, separate codes of conduct—a bitterly divisive issue in Europe. Saidi, a practicing Muslim, said he rejected it. “These physical ghettos become moral ghettos,” he told her.

For E.U. officials working to pre-empt more deadly attacks by homegrown extremists, Saidi’s plays have offered a rare opportunity for Muslims to discuss terrorism with fellow Muslims, without governments getting in the way.

But the governments clearly like what he’s doing. When Belgium and France unveiled a joint antiterrorism plan in February in the northern French city of Lille, they invited Saidi to be part of the proceedings.

The two governments have funded performances of Jihad in schools, as well as in prisons, which they believe are key breeding grounds for jihadist recruits. “This is not only a security issue, it is a social issue,” says Muriel Domenach, head of the French government’s task force on preventing radicalization. “We have to use each and every instrument.” Saidi says he believes performances inside prisons offer inmates a rare window into what is happening in the outside world. “The subject is jihad, but this is also culture,” he says. “I really feel culture is the only weapon we have right now to talk to each other.”

Saidi began writing the second part of the trilogy after a gunman claiming allegiance to ISIS besieged a kosher supermarket east of Paris in January 2015, killing five people. In the play—whose title, Géhenne, refers to a cursed place for sinners mentioned in the Old Testament, the Talmud and the Quran—a jihadist fighter is condemned to hell for killing Jews.

The playwright says many young people tell him after the play that their parents had taught them to hate Jews. Writing the play, he says, was a way of talking about anti-Semitism. “If you accept the disease, you can begin to heal,” he says.

Saidi says he was inspired to write a third play in 2016, after performing Jihad in Paris to an audience of survivors from the attack on the Bataclan theater the previous year. After the performance, several victims of the attack said they wanted to forgive ISIS; they included a man whose wife had been killed while shielding his body from the gunmen. “I was shocked,” Saidi says. “I thought, I cannot forgive them. So how can they?”

In response, Saidi wrote the play Eden, which opens in Brussels in October. In it, a dead jihadist travels to hell to retrieve his girlfriend and bring her to paradise, even though she too has committed acts of terrorism. “It was a way of bringing hope to myself,” Saidi says. “The other two plays had such sad endings.” Does the couple make it to paradise, I ask? “Right now, I cannot tell you,” he says. 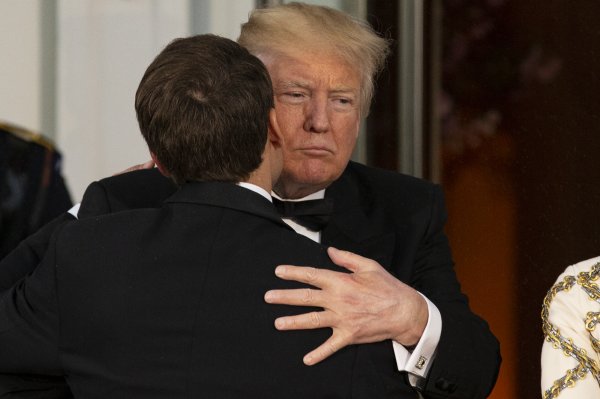 The Trump-Macron Friendship Is Falling Apart at the G-7
Next Up: Editor's Pick