In the 14 years since the final episode of Sex and the City aired, Sarah Jessica Parker has become a real-life fashion mogul with her own shoe line, portrayed a suburban corporate recruiter in the HBO series Divorce and played an actor in an off-Broadway production. But her latest undertaking goes in another direction: literary lion.

Parker’s new publishing imprint, SJP for Hogarth, released its first novel on June 12–within a week of when another celebrity-run book imprint, Lena Dunham’s Lenny, published a new novel of its own. The worlds of fashion and music have long understood the power of celebrity collaborations, which count on high-profile partners to combine expertise and star power. Now book publishers are breaking out of their bubble and looking to outsiders–people with name-brand cachet and stratospheric social-media followings, and who presumably also love books–to curate and helm boutique lists. “Publishers want celebrity stardust, and, let’s face it, most writers don’t have that,” says Claiborne Smith, editor in chief of Kirkus Reviews.

For Parker, it’s the realization of a longtime fantasy. “I never imagined at this point in my life I’d have the opportunity to turn my lifelong hobby of reading into my work,” she says.

Nearly every major publisher is now in the celebrity business. Simon & Schuster has Jeter Publishing, a partnership with baseball legend Derek Jeter that launched in 2013. Random House offered Dunham and her producing partner Jenni Konner their own imprint in ’16, following on the success of Dunham’s best-selling ’14 memoir, Not That Kind of Girl. Henry Holt and Co., known for elevated fiction and news-breaking political titles such as Michael Wolff’s Fire and Fury, announced in 2016 that it had bestowed Bravo TV personality Andy Cohen with his own imprint.

One of the trailblazers in this space was Anthony Bourdain, who died June 8 at age 61. Daniel Halpern, president and publisher of Ecco Books, gave his star author Bourdain his own imprint in 2011. “It was his love of literature that got him doing this,” Halpern says. Anthony Bourdain Books has published 13 works since its founding–thanks in large part to Bourdain’s ability to identify talent. Even before he had his own imprint, Bourdain was bringing in new voices and insisting Halpern publish them. Ecco will publish the few remaining under contract before closing in the wake of Bourdain’s death. “It’s devastating,” Halpern says. “Nobody was so curious and committed, not even close.”

The proto–celebrity editor might be Jacqueline Kennedy Onassis, who took on a consulting editorship at Viking Press in 1975. (In ’77, a Viking spokesperson told the Washington Post that Onassis worked a two- or three-day week “except when she’s out of the country.”) The former First Lady oversaw titles on Russian costumes and fairy tales.

“Jackie Kennedy is one of the models Sarah Jessica and I discussed when we started talking about the partnership,” says Molly Stern, senior vice president and publisher of Crown, Hogarth and Archetype books, who first approached Parker about taking a shot at publishing. “Jackie was a journalist before she was married to the President, and Sarah Jessica was a lifelong reader before she became an actress.”

SJP for Hogarth will publish literary fiction–Parker’s favorite genre–with an emphasis on multicultural voices. “I’m focused on stories that cultivate empathy and expose us to people whose homes I’m not likely to be invited into,” the newly minted editorial director says of her mission.

Fatima Farheen Mirza’s A Place for Us, the imprint’s debut novel, concerns the dynamics of an Indian-American Muslim family in California. While Layla and Rafiq try to uphold their customs, their children Huda, Hadia and Amar struggle to please their parents while also fitting in with their new schoolmates.

In polished prose that zeroes in on domestic detail and, at its loveliest, recalls Jhumpa Lahiri, Mirza delivers a portrait of a family straining to hold its center amid rebellions both quiet and explosive.

“I didn’t even know what an imprint was when Sarah Jessica called me to discuss my novel,” says Mirza, a 27-year-old graduate of the Iowa Writers Workshop. “She was so thoughtful, and the parts of the book she brought up were the ones most precious to me. It was uncanny.”

Parker says she gets nervous in her new role. Taking an approach that’s part book nerd and part method actor, she travels to bookseller conventions, doodles book-cover ideas and attends Penguin Random House’s launch and marketing meetings–where she presents her selections in hopes of winning over the internal support necessary to any book’s success.

“I don’t want to look like a lightweight,” Parker says. “I don’t want people to think I’m dabbling. I want them to know I take their work seriously, and I try to learn about the trade–I’ve spent a lot of time learning about the importance of bookshelf placement.” (If it isn’t visible, she notes, it’s not going to be purchased.)

Kirby Kim, a literary agent with Janklow & Nesbit Associates, has firsthand experience with the soup-to-nuts nature of Parker’s involvement. In March, when he submitted a novel to multiple houses ahead of the London Book Fair, Parker took a break from fair events to read the manuscript, and her imprint wasted no time coming in with an offer. “Instead of just networking and schmoozing, she actually zoomed through the submission,” Kim says. Ultimately another publisher won the title. “You lose books–that has been gutting,” Parker says. “It’s tough, but it’s been good for me. I don’t have a limitless budget. I have to be thoughtful about how we’re spending our dollars.”

For their part, Dunham and Konner have also remained active in the editorial process by keeping the Lenny list small, with a manageable load of only a few books a year. “They’re reading right along with us and offering ideas,” says Random House editor in chief Andy Ward, who is also Dunham’s editor. “They’re incredibly good with the cover stuff too, with type and illustration and, in general, coming up with ideas to give these books a look that feels a little different from what we might normally do.”

The literary world seems largely ready to embrace books from celebrity imprints on their merits. Lenny’s 2017 debut, Sour Heart by Jenny Zhang, a collection of short stories about Chinese-American girls growing up in New York City, was a critical hit and landed on multiple best-of-the-year lists. The imprint’s next offering is Providence by Caroline Kepnes, a modern-day retelling of H.P. Lovecraft’s horror tale “The Dunwich Horror,” about a man who becomes a monster with destructive powers.

With its campy feel, Providence might not seem an obvious sibling for the literary Sour Heart–even more so because it’s a co-product of the author and the book packager Alloy Entertainment, which created the Gossip Girl series. But the works have in common a pair of uniquely powerful champions in Dunham and Konner, who promote their books in their online magazine Lenny Letter.

Even so, certain authors might prefer the imprimatur of a literary institution over a celebrity’s. “I could see why celebrity imprints would be ripe for derision–critics might say celebrities are trying to look smart,” says Katherine Fausset, a literary agent with Curtis Brown Ltd. But, she adds, “maybe Sarah Jessica Parker has a greater chance of sitting next to Meryl Streep at a dinner party than some other editor.” And nearly every writer wants to see their book turned into a movie.

As stars including Reese Witherspoon and Emma Roberts have helped buoy writers to greater visibility with their popular book clubs, the walls between publishing and film have only eroded further. “If you’re being positive about what’s happening now, exciting is the right word,” says Smith. “If you’re being negative, the word is parasitic.”

It’s also a new take on an old tradition. Not long ago, the effort was to spin book editors into celebrities. Within the last decade or so, industry dynamos such as Lee Boudreaux, Sarah Crichton and Reagan Arthur were all given their own imprints that featured their names on the spines. But those experiments were short-lived. The only remaining of the three, FSG’s Sarah Crichton Books, is set to shutter next year.

Parker, meanwhile, is off to the races promoting her first novel. Two weeks before its release, she posted a picture of herself hailing a cab with SJP for Hogarth’s debut book in her hand. It got nearly 167,000 likes. 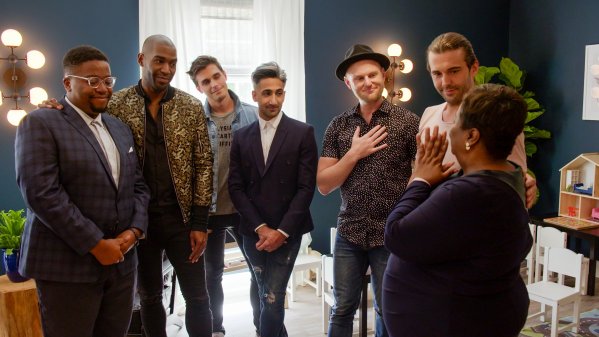 Why Queer Eye Is More Vital Than Ever in Season Two
Next Up: Editor's Pick