'I Hate It.' Double-Amputee Climber Xia Boyu Vows Never to Return to Everest

Xia Boyu isn’t looking his best. Slumped in his Beijing hospital bed in tatty ward-issue pajamas, the 69-year-old is a warren of aches and scuffs, and sports a whopping frostbite sore on each of his two cheeks. But Xia is far from downbeat: an aura of triumph beams all over him. It’s one that stems from defeating a lifelong foe — Everest, the world’s highest mountain, no less — at the fifth attempt. Oh, and without legs, to boot.

“Everest, for me, I hate it. Because it took away my legs,” Xia, who underwent a double amputation below the knee due to frostbite on his first Everest attempt in 1975, tells TIME. “I failed to conquer it four times over the past 40 years. But because of my perseverance and effort, Everest eventually accepted me.”

It’s a battle that has defined Xia, a native of China’s Qinghai province, whose disability was caused after he gave his sleeping bag to a fellow climber struggling with hypothermia. The initial shock of facing a lifetime of limited mobility was replaced by hope after a German doctor said he could climb again by using artificial limbs.

Thus began the next stage of Xia’s quest to reach Everest’s 8,848 m (29,029 ft) summit, which he finally achieved on May 14. Between working in an admin role at the Chinese Mountaineering Association, he kept up a brutal training routine in a bid to reach the zenith of the world. Three more failed attempts owing to bad weather and even an earthquake followed, including a heartbreaking reversal just 100m from the top in 2016 when a blizzard suddenly descended.

In this picture taken on May 16, 2018, Chinese double amputee climber Xia Boyu receives medical attention after returning from a successful summit of Mount Everest in Kathmandu.
Prakash Mathema—AFP/Getty Images

“I thought it was probably my last chance to realize my dream,” Xia says. “But when I thought of my five young Sherpa guides, I decided not to risk their lives because my own selfish interests. So I made the toughest decision if my life: abort climbing.”

Although Xia acted responsibility, the Nepali government decided last December to ban those who are disabled, blind, under-16 or climbing solo from Everest due to the extra risk they pose to others on the mountain. Xia calls that decision “discrimination” as “everyone has the right to pursue their dreams.”

The debate over who deserves to be on the mountain — known as Sagarmāthā in Nepali and Chomolungma in Tibetan — continues to rage, though a legal injunction putting the ban under review provided Xia with a window to complete his climb. “I thought I would be crowing and quoting heroic verse and dancing with ecstasy when I reached the peak of Everest,” he adds. “But when I got there, I realized I was always going to make it sooner or later.”

Read More: The Ethics of Climbing Everest: Double Amputee Xia Boyu’s Feat Fuels Debates About Who Belongs on the Roof of the World

Still, the expedition was not without peril. On the way down, Xia’s stumps swelled up from the exertion so they didn’t fit properly in the artificial legs. “There were two times when my artificial leg was stuck in the ice and it was impossible to move,” he says. “That was the scariest moment for me.”

But now back down in the comfortable 2,303 m (7,556 ft) elevation of the Chinese capital, Xia feels released from his lifetime burden, and free to plan his next move. “First, I need a long rest,” he says. “I haven’t decided the next goal I’m going to conquer.”

Maybe a return to the roof of the world? “No way, perhaps somewhere else,” he says. “I’m never going back to Everest again.”

With reporting and video by Zhang Chi / Beijing 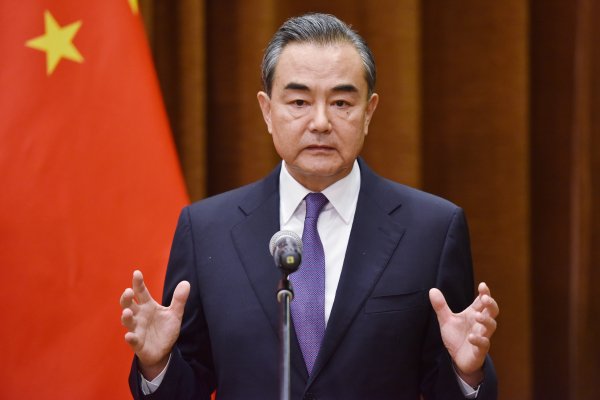 China Praises Trump-Kim Talks for 'Creating a New History'
Next Up: Editor's Pick