South Carolina Elections Show Trump Can Hurt. But Can He Still Help?

The afternoon was classic Donald Trump. As cameras rolled — and many channels took his comments live — the then-candidate insulted the family of Jeb Bush, called Marco Rubio a “choke artist” and aggressively questioned Ted Cruz’s mental health, honesty, citizenship and faith. “I have never ever met a person who lies more than Ted Cruz. I’ve never seen anything like it,” Trump said on Feb. 15, 2016, in Hanahan, S.C.

One of his strongest backers, then-Lt. Gov. Henry McMaster of South Carolina, stood at the side of the low-ceiling, wood-paneled room and smiled widely. McMaster, a veteran politician and former state party chairman, still knew how to win: question the character, integrity and Christianity of your rival, knowing that no one ever lost a vote for casting the choice in the state as an us-versus-them proposition.

That style of hard-elbowed, cold-eye politics seemed to have led to a hiccup for McMaster — despite the Trump blessing. Elsewhere, Trump seemed to be enough to hobble his foes, as was the case for an incumbent Congressman who drew an ire-filled tweet from the President shortly before polls closed.

Taken together, the results signaled no Republican can ignore or upset the President, but neither could anyone count on him for survival.

McMaster is as good a test case as any. Those who have watched him over the years knew he should never be counted out. That’s why, when he became the top South Carolina Republican to back Trump’s White House bid, strategists took notice.

Trump was leading in the polls but he was still an uncertainty in the Republican presidential field. He had come in a surprising second-place in Iowa a few weeks earlier and had surged to a win in New Hampshire. But the thrice-married New York billionaire who once supported abortion rights was now in the South, asking voters in a Republican primary dominated by evangelicals to give him a chance.

The plan was to talk about the U.S. military installation in Guantanamo Bay, Cuba, in a state with one of the highest concentrations of veterans. After about 12 minutes of answering questions about his rivals in the race, Trump finally turned to the military message. “They shouldn’t be moving people, hardened criminals, into this area,” Trump said, criticizing the considered move of some prisoners from Gitmo to Charleston’s Naval Consolidated Brig. (It previously housed American citizens who were detained as enemy combatants.) “I would increase the population,” Trump promised of Gitmo.

Trump also stoked the fears of immigration. “With the migration, you have people coming into the area of South Carolina. They’re coming in. If I were the Governor, I wouldn’t let them come in. I don’t care what the rules and regulations say,” Trump said. “We shouldn’t be taking people in from the migration.”

And, for good measure, Trump blamed the Bush clan for not keeping the country safe on Sept. 11, 2001, repeatedly called Cruz a nutty liar, speculated about Rubio’s nerves and lashed out at former President Bill Clinton.

McMaster simply nodded along. Four days later, Trump won the state’s primary and won every delegate on the table. Bush exited the race altogether, rejected by a state that had given his brother, George W. Bush, a second wind in 2000. A few months later, Trump appointed South Carolina Governor Nikki Haley his ambassador to the United Nations — clearing the way for McMaster to move into the Governor’s Office.

As the elections neared in 2018, Trump sought to keep McMaster there, tweeting that he is “strong on Crime and Borders” and “great for our Military and our Vets.”

Despite his plainspoken approach to politics, McMaster hardly has the authentic credentials that Trump used to great effect. In fact, this is McMaster’s 15th year in public office, dating back to his appointment as U.S. Attorney in 1981. That familiarity — in an environment that rejects insiders or swampiness — is part of the reason why analysts say McMaster ran into headwinds on Tuesday.

Under South Carolina’s electoral system, if no candidate captures 50% of the vote, the top two finishers proceed to a runoff, which is exactly what happened to McMaster, who is now headed for another ballot on June 26.

McMaster also faced questions about his longtime adviser’s ethical scandals. McMaster has not been charged with any wrongdoing, has broken off his relationship with the adviser and has not been asked to testify.

At the same time, in the same state, that pro-Trump message got a boost in a House race against incumbent Rep. Mark Sanford, a critic of the President. Sanford’s challenger, state lawmaker Katie Arrington, successfully made that criticism central to her campaign and promised in television ads to support Trump.

In a late-Tuesday tweet — as polls had been open for more than nine hours and the President was on his way back from a summit in Singapore with North Korea — Trump took a jab at Sanford and the extramarital affair that took him to Argentina and into divorce proceedings.

McMaster is merely the latest test of the Trump halo. The President has had mixed results when he has inserted himself into lower-tier races. He endorsed the losing candidate in both the primary and the general election in Alabama’s special election for the Senate, as well as in the early barometer race for Virginia Governor last year. Republicans held a House district last year in Georgia, but only after party committees and their allies spent more than $18 million to help Karen Handel.

This year, Trump’s record is still split. His endorsement wasn’t enough to help a Republican hold a Pennsylvania district Trump had won in 2016 by 20 percentage points. But it did help a preferred candidate, John Cox, make it onto November’s ballot for California Governor.

More tellingly, though, are the troubles that come to those who show signs of disloyalty toward the President, such as Sanford. In Alabama, Martha Roby signaled she was uncomfortable with Trump as the GOP nominee in the waning days of 2016 when a video recording came to light that showed the then-nominee bragging about sexual assault. A year and a half later, she was forced into a July 17 runoff against a Trump aficionado who ran an ad claiming Roby “turned her back on President Trump when he needed her most” — even though Roby canned the criticism well before Trump had won the White House.

Thus was the paradox of the Trump era for these candidates. Speaking out against him brings nothing but headaches in the first round of voting. But failing to do so could doom these candidates in second round this fall. From afar, Trump can only watch and weigh in on Twitter.

And even then, it’s not entirely clear he’s making the most informed choices, the way his predecessors in the Oval Office would have. For instance, Trump tweeted an endorsement of Rep. Dan Donovan citing his votes “for Tax Cuts.” Donovan actually voted against the GOP package of tax cuts this year. 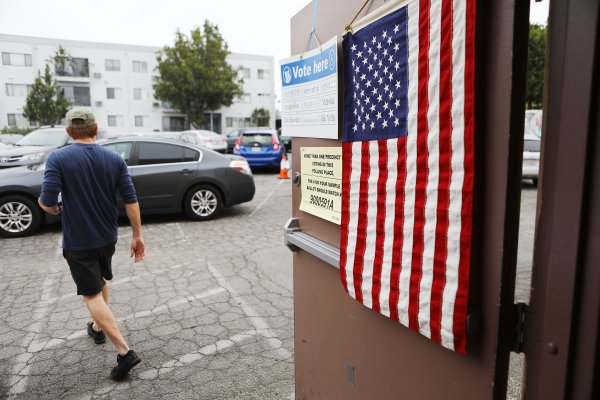 Democrats Avoided a Nightmare Scenario in California
Next Up: Editor's Pick