'Think of It From a Real Estate Perspective': The Most Memorable Quotes From the Trump-Kim Summit Press Conference

Trump appeared relaxed and talkative, despite telling reporters that he had not having slept “in 25 hours.” He apparently decided to extend the conference partway through, asking press secretary Sarah Huckabee-Sanders if he should continue taking questions.

The president gave some insight into what the leaders discussed, and referred to the document the pair signed—before reporters had seen an official version. He said the pair had agreed to work on denuclearization of the Korean peninsula, which was included in the document the leaders signed. Despite not being included in the signed summary, Trump also said he raised the abductions of Japanese citizens and discussed human rights, saying “it’s rough” in North Korea, but also “rough in a lot of places.”

During the press conference, Trump made several statements that raised eyebrows. Here, five of his most memorable quotes.

Military exercises on the Korean Peninsula

“We will be stopping the war games.”

Most surprising of all was Trump’s assertion that the U.S. would stop its “war games”—the military exercises in the Korean peninsula that are a particular point of contention for Pyongyang. The U.S. has troops stationed in South Korea and Japan and carries out annual military drills with its allies in the region. North Korea has always denounced the exercises as preparation for an attack on its regime. To stop the exercises completely would be a highly significant—and surprising move—particularly when Trump was less clear on what concessions the U.S. had wrangled in return.

Asked directly about the 100,000 people interned in North Korea’s prison camps that would know nothing of the summit, Trump said “I think I helped them.” He went on to call the internees “one of the great winners today,” but did not specify any action that Kim or he planned to take, obliquely referencing “other things” that needed to stop as well as its nuclear weapons program. He seemed to credit the North Korean leader without specific evidence, saying “at a certain point I really believe he is going to do things about it,” but not mentioning what those things would be.

“I may be wrong, I mean I may stand before you in six months and say, ‘Hey I was wrong.’ I don’t know that I’ll ever admit that, but I’ll find some kind of an excuse.”

Trump praised the North Korean leader several times during his press conference—as well as calling him “very talented” and a “great negotiator,” he expressed his trust that the dictator would follow through on plans to work towards denuclearization. Talking about an engine testing site and being asked whether he had faith in the process, Trump said he trusted Kim, but that, in six months he might be proved wrong—even though he would be unlikely to admit to it, prompting a small ripple of laughter.

On the development of North Korea

“As an example they’ve got great beaches… I explained, you could have the best hotels in the world right there. Think of it from a real estate perspective.”

As well as talking about his self-proclaimed deal-making prowess once more, Trump also referenced another of his favorite topics: real estate. He said he had told Kim what North Korea could achieve in a peaceful scenario: “some of the best hotels in the world.” Referencing North Korea’s “great beaches, you see when they’re exploding the cannons into the ocean—I thought wouldn’t that make a great condo… I explained, instead of doing that you could have the best hotels in world.” He said he encouraged Kim to think of it from “a real estate perspective” with North Korea’s strategic position between the South and China.

On the summary of the meeting

“I don’t have to verify, I have one of the great memories of all time.”

Trump told reporters that he didn’t think there were recordings of the meeting, even though he “wished they were” and said he had had a “heartfelt conversation” with the North Korean leader. He seemed unconcerned about needing minutes of what had been discussed, repeating his often asserted claim to have “one of the great memories of all time.” 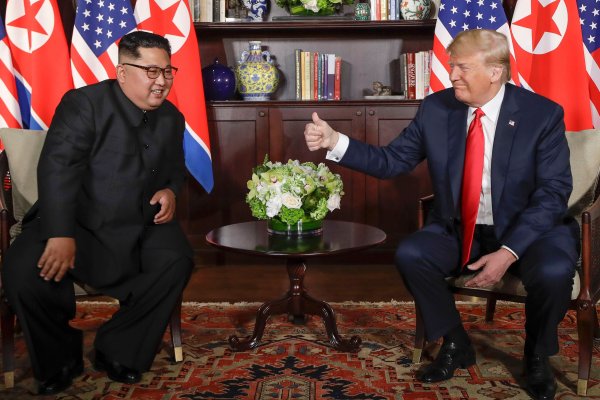 Here's What Body Language Reveals About the Singapore Summit
Next Up: Editor's Pick