The young North Korean defector was in the South Korean capital, Seoul, watching the opening moments of the historic June 12 summit. He sat cross-legged, head cocked, at the head office of Teach North Korean Refugees (TNKR)—a local NGO that pairs volunteer teachers with defectors who want to learn English.

On the monitor before him, footage of the two leaders’ first meeting streamed via local news networks. Heo sipped canned coffee and munched a bulgogi sandwich, careful not to spill anything on his fashionably cut suit. A slight smile played on his lips. “They just shake hands and that’s it?” he said.

Now a political science major at Seoul National University, Heo says he had not discussed the summit much with his defector friends, who by and large aren’t impressed with diplomacy.

He first defected from his home in the North Korean coastal city of Chongjin in 2005, aged 13. Two Chinese traffickers sent by his mother bribed a soldier to piggyback him across the Tumen river. Only a week after he entered China, police there arrested him and deported him back to the North.

Perhaps because of his age, or perhaps because his grandfather had held a senior rank in the armed forces, Heo was not beaten like some captured with him. After a three-month spell in prison he was released under house arrest. Faint with hunger, forbidden from speaking about his experiences, and made to file daily reports to the secret police, Heo remained tantalized by his brief encounter with China’s illuminated streets, busy traffic and teeming urban life. He began to realize that the belief that North Korea was “the mostly heavenly country in the world,” inculcated in him from an early age, was a lie.

Heo escaped North for good in 2008 and made it to South Korea in 2011. He says that he would eventually like to work in South Korea’s Ministry of Unification, and scrutinized the summit footage with professional interest.

“I think he lost confidence a little because he did not look in Trump’s eyes,” Heo said of Kim. “It’s not just a language problem.”

Later, the two leaders—flanked by interpreters and senior diplomats—talked across a lacquered table. Korean news anchors speculated over whether Trump’s declaration that the pair would solve a “big dilemma” meant guaranteeing the regime’s safety while effecting complete, verifiable, irreversible denuclearization, a term now commonly referred to by its acronym CVID. (The South Korean news agency Yonhap reported that Trump had said sanctions would remain in place until denuclearization was complete.)

At Heo’s university, he says, a professor had recently surveyed the class on whether they thought CVID was a realistic outcome. The class split down the middle, and Heo was in the no camp. “I think it’s impossible. CVID means the end to the Kim regime because we always had the propaganda that we should be proud of our strong military power. Without it, we could not talk to America.”

But the threats Kim faces aren’t just external. Prominent defector Ji Seong ho, who escaped North Korea in 2006, spoke with TIME on June 9, shortly before he left Seoul for Washington, where he was due to receive a National Endowment Democracy (NED) 2018 Democracy Award.

“Fewer and fewer people sympathize,” he told TIME through an interpreter, with the idea that the Kim dynasty is sacred. “More North Korean people want less interference from the government because they think the government is exploiting their labor and interfering too much in their personal lives.”

He spoke from bitter experience. In a 2015 speech titled “My Impossible Escape From North Korea” Ji bought international audiences to tears with his account of losing a leg to a freight train while pilfering coal to sell for food. Ji endured amputation without anesthetic, regained a measure of strength only because of food scraps scavenged by relatives, and almost drowned as he crossed the Tumen river on homemade crutches.

Heo, meanwhile, was not holding out for any meaningful change. “I really want to be optimistic about the summit,” he tells TIME. “But from my own experience in North Korea, Kim doesn’t want give up [his nuclear weapons] quickly.”

Even if he could bring himself to believe in Kim’s good faith, Heo says he dare not voice such sentiments to his fellow defectors. Positive assessments of the North, he says, only leads to “ruined friendships.”

—With reporting by Ha Yeon Kim/Seoul 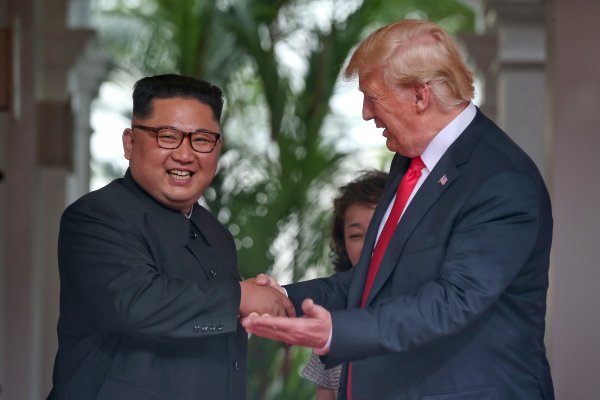 What Kim Jong Un and Donald Trump Said to Each Other When They First Met
Next Up: Editor's Pick