When President Donald Trump met face-to-face with North Korean leader Kim Jong Un for the first time, he had only one other person in the room on his side: State Department interpreter Yun Hyang Lee.

Lee, State Department’s interpreting services division chief, has been an “unsung hero” in negotiations with both North and South Korea for years, Frank Aum, a North Korea expert at the U.S. Institute of Peace, told TIME.

“She doesn’t try to be the star of the show, she says in the background,” said Aum, who worked with Lee in high-level negotiations involving the U.S. Defense Department. “She’s very attuned to getting the interpretation and translation right rather than being more involved than she has to be.”

Lee has worked extensively with the State Department and White House under former Presidents George W. Bush and Barack Obama, and served Trump last November during a visit by South Korean President Moon Jae-in, according to The Korea Times. Lee was also reportedly present with Trump to greet the three American detainees released by North Korea last month.

On Tuesday, Trump appeared to be in safe hands with Lee by his side during his meeting with Kim. The President emerged from the one-on-one saying that he had an “excellent relationship” with the North Korean dictator. The two leaders went on to sign a joint agreement in which they committed to working “toward complete denuclearization of the Korean Peninsula.”

Lee earned a master’s degree in interpretation and translation from Hankuk University of Foreign Studies in Seoul and recieved a Ph.D. from the Faculty of Translation and Interpreting at the University of Geneva in 2009. She taught at the Monterey Institute of International Studies at Middlebury College in California and Ewha University in Seoul, and is a member of the International Association of Conference Interpreters.

She also served as an official Korean interpreter for the 2008 Olympics in Beijing, 2010 Games in Vancouver, and 2018 Winter Games in PyeongChang, South Korea.

President Donald Trump, with Yun Hyang Lee at his side, speaks to North Korea's leader Kim Jong Un before their expanded bilateral meeting at the Capella Hotel on Sentosa island in Singapore June 12, 2018.
Jonathan Ernst—Reuters.

Despite her expertise, Lee’s task was not an easy one. She had to mediate between two leaders known for trading stinging insults, and to interpret Trump’s impulsive manner of speaking. The extent of Kim’s English skills are also not known, though the North Korean leader greeted Trump by saying “Nice to meet you, Mr. President.”

Lee is well aware of these risks. In 2015, she told South Korean newspaper JoongAng Ilbo that diplomatic interpretation doesn’t contain definite certainties like “yes” and “no,” according to Bloomberg. “There’s only something in between,” she said.

Another challenge of interpretation is conveying the little things, jokes, slang terms or colloquialisms, that can get lost in the conversation. Aum, the North Korea expert, said Lee’s expertise shines in this area.

“People in the U.S. Government don’t do a lot of work trying to find the right talking points to get the right messages to the other side. They assume everything translates 100%,” he said. “But there’s many times where little jokes or phrases don’t get picked up. She’s been excellent at picking up the nuances and making sure that the U.S. message is portrayed accurately.”

Correction: The original version of this story misstated the affiliation of the U.S. Institute of Peace. It is an independent organization founded by Congress, not a part of Johns Hopkins University. 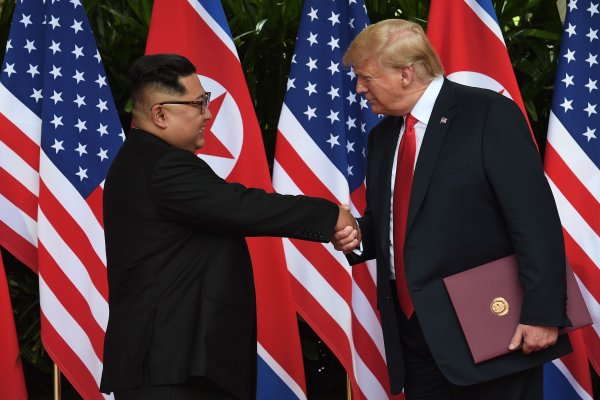 There Are 5,300 U.S. Service Members Buried in North Korea. The Trump-Kim Agreement Could Bring Them Home
Next Up: Editor's Pick