Octopus and Ice Cream: What President Trump and Kim Jong Un Ate at Their First Lunch

The historic summit between President Donald Trump and North Korean leader Kim Jong Un continued midday Tuesday, as the leaders satisfied their appetites while holding negotiations with a contingent of advisers over a working lunch.

The lunch, which followed a 45-minute one-on-one meeting between the leaders earlier in the morning and bilateral discussion with senior aides, was held at the Capella Hotel on Singapore’s Sentosa Island.

It was far from an intimate affair, with each leader accompanied by a bevy of senior staff, according to the White House. Joining Trump were Secretary of State Mike Pompeo, Chief of Staff John Kelly, National Security Advisor John Bolton, U.S. Ambassador to the Philippines Sung Kim, press secretary Sarah Huckabee Sanders, and Deputy Assistant to the President for Asian Affairs Matthew Pottinger.

The party was seated facing each other at a rectangular table, according to the Associated Press. Trump asked photographers: “Getting a good picture everybody? So we look nice and handsome and thin? Perfect.”

What was on the menu?

The lunch menu was also a showpiece in diplomacy, including a range of options to satisfy Western, Southeast Asian, or Korean palates. The starters comprised a choice of prawn cocktail with avocado salad, green mango kerabu, a Malay salad, with octopus and honey lime dressing, or “oiseon,” a Korean stuffed cucumber appetizer.

The main courses were a choice of beef short rib confit with potato dauphinois and steam broccolini, sweet and sour crispy pork and Yangzhou fried rice, or “Daegu jorim,” a popular Korean dish of soy-braised cod with softened radish and vegetables.

The menu for a working lunch served to U.S. President Donald Trump and North Korea's leader Kim Jong Un and their delegations during their summit at the Capella Hotel on Sentosa island in Singapore June 12, 2018.
Reuters

A selection of meal options was likely intended to show respect for various cultures and cuisines. Trump is known for having finicky tastes, which include a steady supply of Diet Coke and steak cooked well-done. Japanese Prime Minister Shinzo Abe famously served Trump hamburgers on a visit to Japan last year.

In contrast, when Kim met South Korean President Moon Jae In in April, the menu consisted of a pan-Korean banquet suffused with symbolism that referenced Moon’s hometown and Kim’s Swiss education, and included cold noodles from Pyongyang.

Washington and Pyongyang are expected to issue a joint communique before both leaders depart from Singapore Tuesday. 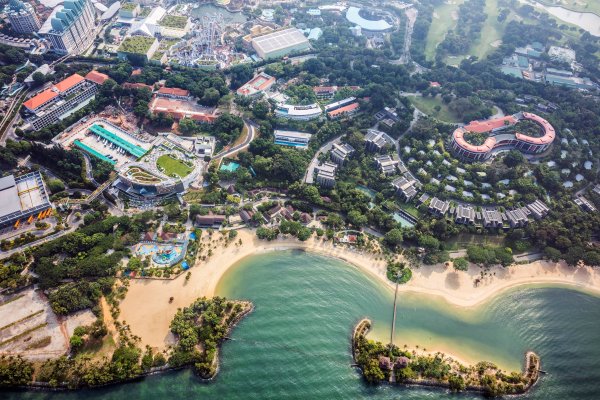 The Dark History of Singapore's Sentosa Island
Next Up: Editor's Pick