Nestled off the south coast of Singapore, the resort island of Sentosa will serve as the picturesque backdrop to one of the most highly-anticipated diplomatic events in a decade, as President Donald Trump becomes the first sitting U.S. president to meet with a North Korean leader at Tuesday’s summit with Kim Jong Un.

Both leaders landed in Singapore on Sunday, joining the estimated 3,000 journalists expected to cover the summit. Singapore, ranked the safest nation in Asia, was selected as a neutral environment for the high-level historic talks. But Trump and Kim will meet away from the bustling financial hub of the city, at The Capella Hotel on Sentosa Island.

Sentosa today is a popular vacation spot, with golf courses, theme parks and luxury resort hotels. It’s a far cry from the island’s previous incarnations as a fishing village and, in the 1940s, as a prisoner-of-war camp. Even the island’s name, which means “tranquility” in Malay, is a relatively new move away from its troubled past. According to Singapore’s National Library, Sentosa was historically known as Pulau Blakang Mati, until it was renamed in a public competition in 1970. Blakang Mati translates as “Behind Death” in Malay, and various theories have connected this name to legends of piracy, bloodshed and supernatural “warrior spirits” on the island and its surrounding areas.

The island has also suffered through its fair share of death. A mysterious epidemic outbreak in the early colonial period, now thought to be malaria, killed most of the island’s inhabitants, leaving only two households on the island by 1848, down from an original population of around 60. In February 1942, Singapore fell to the Japanese, which resulted in life under a brutal occupation until the end of the World War II in 1945. As TIME wrote in 1942 after the Battle of Singapore:

The Japanese used a beach on what was then Pulau Blakang Mati as a location to carry out mass executions of Chinese civilians—part of an operation designed to purge the Chinese living in Singapore and exercise strict control upon the civilian population. Other parts of the island were used as a prisoner-of-war camp and a base for a Japanese Air Force unit, which also housed a number of Korean “comfort women.”

Efforts to transform the island into a tourist destination started four years after Singapore’s independence in 1969 and continued in the 1970s and 1980s with the rebranding of ‘Sentosa,’ complete with the construction of a cable car and monorail system linking it to the mainland. However, tragedy struck in 1983 on the cable car system when seven people died after an oil drilling ship collided with the cableway. After dwindling interest and declining visitor figures following the accident and during the 1990s, the Singaporean government announced a $2.2 billion overhaul of Sentosa in 2002. The pinnacle of Sentosa’s evolution into an attraction for tourists came with the opening of the island’s casino and theme park showpiece Resorts World Sentosa in 2010.

The Capella Hotel houses a standalone private property, which could be a prime spot for Trump and Kim’s first round of talks as they sit in a one-on-one session at 9 a.m. Tuesday with only their translators for company. As the world’s eyes turn to Sentosa to see what, if any, significant announcements are made, hopes are indeed high for a future of “tranquility.” 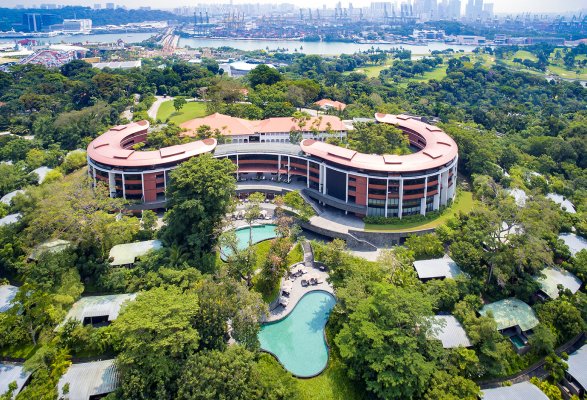 Trump and Kim Come Face-to-Face
Next Up: Editor's Pick